Butterflies can be choosy little things... Guest blogger Julian Dowding from the Suffolk branch of Butterfly Conservation on how the reintroduction of the buckthorn bush has paid dividends for the local brimstones. 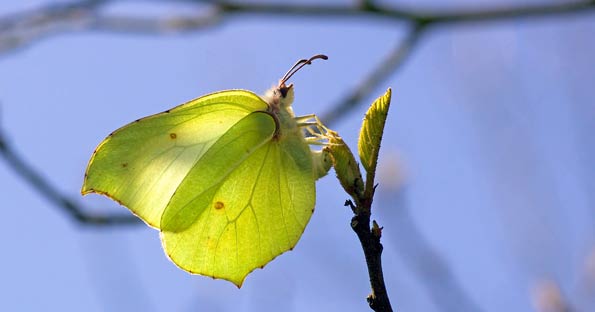 In 1998 the Suffolk branch of Butterfly Conservation, along with Ipswich Organic Gardeners Group, Ipswich Wildlife Group and the Wildlife Rangers at Ipswich Borough Council, launched the Brimstones and Buckthorn initiative. It's essentially a wildlife gardening exercise to encourage people to plant buckthorn bushes. Buckthorn is the sole food plant of the brimstone butterfly which is known for its ability to travel miles to find the bush to lay its eggs on.

The initiative was a success. In just two years over 2,000 bushes of both common/purging buckthorn (Rhamnus cathartica) and alder buckthorn (Frangula alnus) were planted in the target area. Female brimstones soon homed in with the first one turning up during fine sunny weather at a home in Bildeston on May Day 1999.

Bushes were planted for three more years until 2003 with the result that butterflies were seen in increasing numbers in the area. For example, from 2000 to 2004 there were 242 records of brimstones in East Suffolk. From 2005 to 2009 this had risen to 644.

Another aim was to raise awareness of the merits of the bush for other species. Buckthorn flowers provide nectar which seems particularly attractive to bees and hoverflies. Later in the year, shiny black berries provide a valuable source of food for birds. As for other Lepidoptera, the green hairstreak occasionally oviposits on common buckthorn and the holly blue uses alder buckthorn as well as its more normal larval food plants. A number of moth larvae are also occasionally found on these bushes.

It's great news that these days buckthorn is often found in hedgerow mixtures sold in garden centres, but there is still room for improvement. So 13 years after we first launched the campaign, we're resurrecting it. The aim is twofold: to boost the numbers of brimstone in the county and also to get more people involved in wildlife gardening.

This time around, we'll be using the internet to collate data and plot the location of any brimstones using bushes planted during the initiative. People will be able to view their records of plantings and sightings online with a map containing details of all the other records from the scheme. It also has the potential to provide far more up-to-date feedback and to find out what other insects are associated with buckthorn.

To start off, we'll be sending out bare-rooted whips to the public along with planting details this winter. Bushes will be free (although any donations gratefully received). Participants will be asked to monitor growth and to look out for brimstones and egg-laying activity over the following two years. 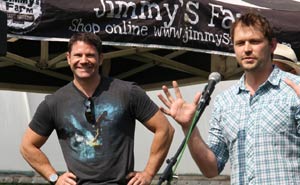 The value of wildlife gardening and in particular the fascination for insects, was brilliantly emphasised by TV presenters Jimmy Doherty and Steve Backshall, at Jimmy's Farm earlier this year. At the opening of Jimmy's tropical butterfly house at Wherstead, three buckthorns were ceremonially planted in the adjacent wildlife garden to increase the availability of habitat for native butterflies.

The initiative is open to anyone in East Anglia. If you're interested please contact us at brimstones@suffolkbutterflies.org.uk

Don't forget that buckthorn's not the only butterfly friendly-plant. From buddleia to lavender there's plenty you can plant in your garden to attract and help butterflies and moths. For more ideas, read this guide from Butterfly Conservation.