Foraging for the beginner

Guest blogger: Andy Hamilton is an expert on home grown food, wild food and brewing. He has foraged for The Eden Project, at literary festivals, end of the world festivals and eaten his way through much of Bristol's wild flora and fauna as well touring the country in search of the great British homebrew.

After your first climbing lesson you would not go out and try and tackle the OId Man of Hoy, nor would you think you could run a marathon after jogging for the Number 32. Alas, many people think it is a great idea to go out and pick mushrooms after only seeing button mushrooms in the supermarket. 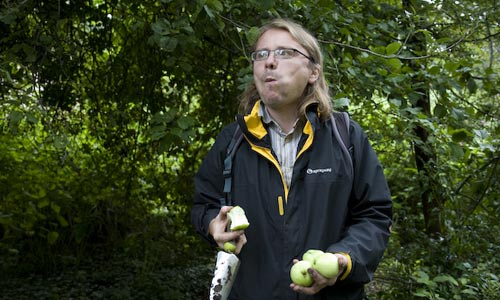 I have seen people armed with a small mushroom book of hand-drawn pictures entering woodlands in search of food. Taking the family on an outing can be great fun but alas, this can sometimes lead to serious poisoning or at worst (although relatively rare) death. I only wish I could spend an afternoon with these mushroom pickers to show them that there are far safer and equally as enjoyable ways to forage without any life threatening consequences.

One of the first things I ask the groups of people who I take out foraging is whether or not they have foraged before. Most will say no and then I ask if they have picked a blackberry or an apple from a tree. Suddenly most of the group are in agreement that they have not only been foraging but they have been since they were children.

I imagine that most people have also been stung by a stinging nettle, used a dock leaf to rub on it and even sat on a thistle. Believe it or not, all of these are edible. As a simple first step into foraging I would suggest trying at least one of them out as a food. Nettles can be made into a whole variety of things from a soup to a beer and even a nettle haggis.

The watchword when trying out nettle recipes is spinach, not because it tastes like spinach or even wilts down to the same degree as spinach but merely as an easy short cut to your recipes. Although don't make the same mistake as one lady I met did and put them raw into a salad.

Young dock leaves can be eaten raw but in my opinion are far better cooked. My favourite meal using them is to use the dock leaf as if it is a vine leaf and make stuffed vine leaves.

Lastly, the thistle. Each part of this can be eaten. I tend to eat the roots raw when I am digging away on my allotment plot. When rid of their spines the leaves can be eaten like a celery. The stems when peeled, steamed and drizzled in butter are a welcome addition to any meal.

So before you dismiss your garden weeds as just that do a bit of research and see what foods you might be throwing on the compost heap year in year out!

Update: Andy was on Autumnwatch Unsprung on 14 October showing off his culinary skills live. Watch the clip below to see him foraging around the city of Bristol or go to Unsprung on iPlayer to see what he cooked up.

If you're feeling inspired, try some of his fantastic foraging recipes: Dandelion and wood avens coffee, Stuffed dock leaves or Braised thistle stem.