As the number of streets lights has risen our night skies have been getting brighter. This is welcome news for some: more street lights means less crime, or at least less fear of crime. For others it's a case of more light pollution causing yet more damage to our environment.

This year on 27 March the WWF held their fourth annual Earth Hour. They asked supporters across the world to switch off their lights for one hour to make a stand against climate change. The British Astronomical Association's Campaign for Dark Skies also advocates that councils and organisations use "the right amount of light, and only where needed" to help stargazers.

Some counties in the UK have already started reduced street lighting trials designed to cut public spending and save energy.

But it's not just about cash, carbon and stars. There's also evidence to suggest that artificial lighting is affecting our wildlife. According to the Butterfly Conservation Trust [pdf] moths are in trouble. This could be because they're attracted to street lights where they're more visible to predators like toads and bats. By adopting a street light as their takeaway of choice, these predators are in turn more vulnerable to fatal encounters with domestic cats and traffic.

Could the lesser horseshoe bat be a victim of light pollution? © Emma Stone

Another theory is that nocturnal animals avoid artificial light sources altogether, radically changing their normal behaviour. These changes are rarely beneficial. Some waste valuable energy travelling longer routes to feeding grounds. Others delay or even abandon feeding and mating routines. Conservationists are particularly concerned about British bats. Numbers have decreased so dramatically over the last century that all 17 resident species are now protected by law.

One group of scientists doing its bit to investigate is The Bats and Lighting Research Project at Bristol University. Emma Stone and her team are investigating the impact of street lights on how lesser horseshoe bats feed and how they travel to food along 'linear features' like hedgerows. 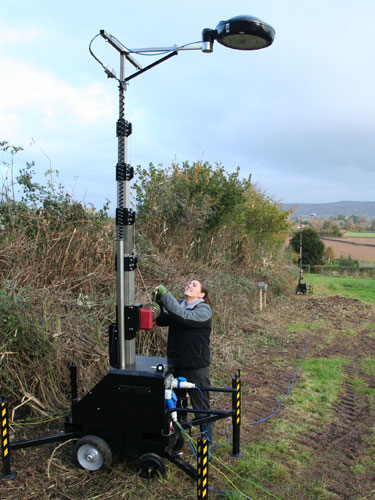 The team at Bristol University have to consider how bats and humans can live together. And this is where you can help. They've set up an online survey to find out your opinions about light pollution and what potential solutions you would be happy with in your area.

Obviously the more opinions they get, the better the results so please help them by filling in the survey. We'd also like to know what you think. Would you feel safe with less lighting at night? Do you live in an area that's testing out part night lighting? Share your stories and comments with us below.