My mission? 31 days without plastic

The apparently innocuous plastic toothbrush can turn into a wildlife hazard if junked improperly.

Scientists studying seabirds in the North Pacific have found toothbrushes (and many other plastic objects) in the stomachs of dead birds.

And founder of the Blue Ocean Institute, Carl Safina, describes in his book Eye of the Albatross how he watched an albatross on Hawaii trying to regurgitate a toothbrush as food for its chick.

Dentists recommend changing your toothbrush every three months so that's about 12 per year for our three-person household.

Admittedly, our dozen are unlikely to end up as ocean pollution but they will still go to landfill along with our other plastic waste. 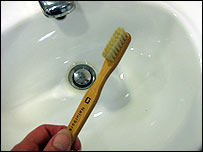 My plastic toothbrush was looking a bit dog-eared so I searched for an alternative and found a wooden toothbrush with natural bristles (aka sterilised pig bristles) which technically could be composted at the end of its lifespan.

The head was wrapped in a little bit of plastic but nothing like the all encompassing packaging for a normal toothbrush.

At £3.99 it was, however, about double the price of a normal toothbrush.

It is designed for a toddler but feels very similar to a basic adult toothbrush. And, once I'd got over the slightly odd idea of putting pig bristles in my mouth (although I'm not sure why it felt odd seeing as I'm not a vegetarian) it was fine.

Another option would have been to use a "chewing stick" - a traditional African and Asian way of cleaning teeth using twigs from certain plants such as the neem tree.

Toothpaste also comes in plastic packaging: even those brands which are available in a metal tube have a plastic lining and cap.

We haven't run out of paste as yet but I have tried making my own dentifrice (as it's properly known), with bicarbonate of soda, salt, peppermint oil and glycerine.

It is, I have to say, disgusting. Maybe I got the salt levels wrong but it was like taking a mouthful of the Dead Sea.

Janet Clarke of the British Dental Association warned that the concoction "does not offer the same oral health benefits" as paste which contains fluoride, including (worryingly) protection from bad breath.

She added that if the wooden toothbrush doesn't dry out properly it could become unhygienic.

I hope I manage to get through the month without losing too many friends.

My name's Chris Jeavans. For one month I am attempting to live my normal life with one main change - no new plastic. That means no bags, no packaging, no plastic to hang around in landfill. In this blog I'll keep you updated to let you know how I'm getting on.