Yesterday I was given exclusive access to the preparation work that's going on for the Crossrail tunnelling.

Millions of pounds are being spent on archaeological and geological surveys across the capital and they're coming up with some striking findings.

The archaeologists are currently working outside Liverpool Street Station.

Behind some metal hoardings - yards away from the 205 bus route - they've been digging trenches where Crossrail's ticket hall will be. 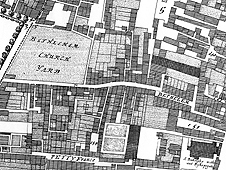 Here they've found a burial site close to the St Bethlehem hospital - which was the world's first and oldest institution to specialise in mental illnesses. I'm told it's where the word "bedlam" originates.

On the map here it's called "Bethlehem Church Yard"

There could be hundreds, if not thousands, of skeletons under the road. Slowly with trowels, the archaeologists are uncovering them.

We clearly saw three skeletons twisted and distorted after hundreds of years underground.

Here's a photo of our cameraman Ian Paice down the trench filming them. 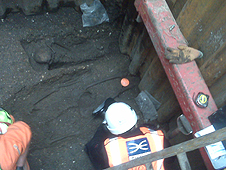 The archaeologists think this is a significant site and will be able to tell us a lot about how people lived (and died).

Many of the artefacts will end up in the Museum of London - other bodies will be exhumed to another site.

What's particularly striking, I thought, was this is archaeology done in difficult and demanding circumstances on a busy road surrounded by buildings.

The archaeologists have traffic management problems as it sits in the middle of Liverpool Street. They also have to avoid many pipes and cables from the utility companies.

It's not easy archaeology and is miles away from the stuff you sometimes see on TV. This is known as commercial archaeology.

It is happening at 20 sites along the route and it has to be completed as part of the planning regulations.

Underneath the Astoria nightclub (RIP), they found an old Crosse & Blackwell vault - perfectly sealed with jars still on the shelves.

Here are morephotos of the discovery.

These sites, by law, all have to be checked to make sure there is nothing of archaeological importance that will be destroyed. Only then will the construction begin.

I was also allowed into a warehouse in Silvertown full of boxes of soil.

Over a thousand boreholes have been drilled along the Crossrail route and each "core" is being examined here.

This is the largest geological survey that's ever taken place in the capital. And it's mapping the fault-lines and different soil types under the ground.

They want to reduce ground movement and make the Crossrail tunnelling as risk-free as possible.

Which soil they find will influence which type of construction they'll use underground.

So the actual tunnelling in central London may be years away, but plenty of work is already being done to prepare the way.