Public transport in London: A decade in numbers 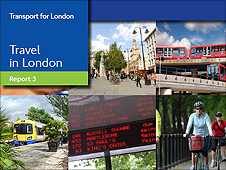 In amongst the 290 pages of Transport for London's annual 'Travel in London' (PDF) report are some interesting stats that show the increases in commuters using public transport.

The increases between 2000 and 2009 are absolutely huge when it comes to passenger journeys, particularly on the buses.

That probably reflects the improved service on the buses between those dates in terms of frequency, reliability and perhaps ease of paying with Oyster and the relative expense.

The average number of people on a bus has also jumped up 22%. But the Tube hasn't followed by as much.

Is that because the Tube was already at capacity?

These shifts in stage-based mode share have taken place against a backdrop of increased aggregate travel volumes, reflecting among other things population and employment growth.

Thus, within the context of increased overall travel, the net shift in mode share towards public transport simultaneously achieved in London has contributed to travel overall becoming more sustainable."

So overall there has been a 5% increase in the use of public transport.

Having said that, although the number of car journeys has dipped slightly it still represents the largest single mode of transport in London.

The documents say of the dip in car journeys:

"While initially the scale of the decline was greater in Inner and central London than in
Outer London, partly reflecting the introduction of Congestion Charging in central London in 2003, the latest change, between 2008 and 2009, was similar in all three
areas. This 3 per cent fall in London for 2009 compares with a 1 per cent fall
nationally in Great Britain, and is at least partly attributable to the wider effects of the economic recession that have similarly affected other areas."

Average number of passengers on a...