Do you get one of the UK's most overcrowded trains? 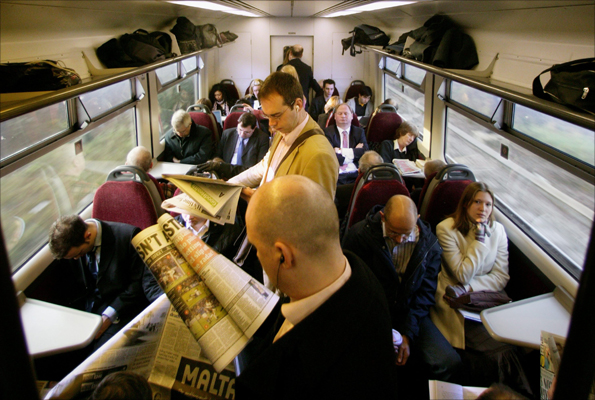 A Freedom of Information request has found that all of the top 10 most overcrowded trains (PDF) are those going into and out of the capital.

It probably won't surprise the commuters who use these services but it might be interesting what the train operators are trying to do to alleviate the problem.

Here are the most overcrowded trains and a little explanation underneath from the Department for Transport:

1. 06:12 service from Didcot Parkway to London Paddington (248 passengers in excess of its capacity of 395)
ln May 2010 FGW changed the type of train used on this service (to a 2+7 HST), which increased the number of standard seats to 440, with much more standing room for passengers. More recent figures (spring 2010) showed loadings of 459.

2. O7:42 service from Reading to London Paddington (326 passengers in excess of its capacity of 533)
This is a very popular commuter service into Paddington. FGWwould like to strengthen this service, although is unable to do so with current levels of rolling stock without adversely affecting other services. The company is speaking to the Department about ways to address the issue.

3. 18:30 service from London Paddington to Weston-super-Mare (205 passengers in excess of its capacity of 395)
This is the first off-peak evening service to the West Country. FGW reports that this was its busiest train last autumn and it is very aware of the problems on this service last year. This train became an off-peak service in September 2009, and demand increased. In May 2010 FGW reclassified this as a peak service, to help distribute passenger flows more evenly, which has helped resolve the problem.

4. 18:22 service from London Liverpool Street to Clacton-on-Sea (262 passengers in excess of its capacity of 524)
From the May 2010 timetable NXEA now operates this service utilising 3x321's with a capacity of 876 seats. At 12 carriages, this service is at the maximum length for the route, with current loading of this train averaging 58 per cent.

6. 07:43 service from Henley-on-Thames to London Paddington (110 passengers in excess of its capacity of 225)
FGW recognises the capacity issues on this service, particularly for customers travelling from Twyford. The company is speaking to the Department about ways to address the issue. Latest figures (spring 2010) show a significant reduction in loadings to 267.

7. 07:32 service from Woking to London Waterloo (357 passengers in
excess of its capacity of 738)
This 12-carriage train (Class 450) is the maximum length for any train on the SWT network. The spring 2010 count reveals that the load factor on this particular train has fallen slightly by 5 percentage points to 143 per cent.

There are alternative services from all stations served both 20 minutes earlier and about 10 minutes later (the later train arriving at Waterloo 7 minutes later) both of which have a current load factor of less than 100 per cent (from Woking there are trains every few minutes at this time of day).

There are no track capacity or rolling stock resources to mitigate this with any additional services.

8. 06:00 service from Bristol Temple Meads to London Paddington (180 passengers in excess of its capacity of 395)
FGW recognises the capacity issues on this service from Reading, which is one of its most popular trains. The company is speaking to the Department about ways to address the issue.

9. 07:10 service from Oxford to London Paddington (171 passengers in excess of its capacity of 395)
FGW recognises this is one of its busiest services. The company is speaking to the Department about ways to address the issue.

10.18:45 service from London Paddington to Reading (116 passengers in excess of its capacity of 27O)
The number of carriages on this service has been temporarily reduced to allow FGW to carry out an £8m refresh of its 16x fleet. This will return to a S-carriage train once that work is completed.

Here is the Government's response:

"As part of the Government's commitment to tackle overcrowding on the railways we have pledged to invest in more than 2,100 new rail carriages as well as completing the vital Crossrail and Thameslink projects in London.

"In addition, binding obligations on service quality and tackling overcrowding are likely to form part of the Government's new approach on commuter franchises."

"In total the Government will deliver more than 2,100 new rail carriages onto the network by May 2019. Of these, 1,800 will be for new Crossrail and Thameslink services. This will in turn free up hundreds of existing electric carriages to be deployed onto the newly electrified lines by franchised train operators. In total, there will be at least 1,850 net additional carriages on the network by 2019."

So the bottom line is even though the government is buying 2100 carriages - the actual increase will be 1850 extra carriages on the network as some are replacing old carriages that are at the end of their life and so are not "extra".