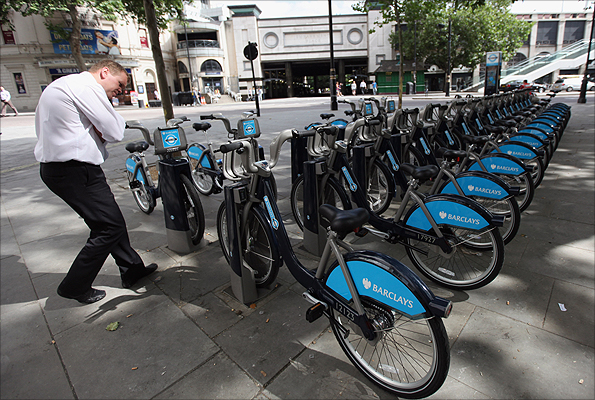 One of the older docking stations in London. Waterloo's new station has space for 126 hire bikes

I've just received this press release below from Transport for London. The mega docking station at Waterloo has been finished rather quickly it has to be said.

The big question will be if this solves the redistribution problems of the bike hire system.

Or will the extra capacity simply attract more hire bikes?

Long-term we might also see these uber racks at other stations.

Jenna at the TfL press office says that's certainly part of the thinking although there are no concrete plans yet as to where. King's Cross would seem a sensible option.

This also changes the all-important ratio of docking places to hire bikes.

Here's the press release in full:

Commuters using Waterloo are now able to pick up Barclays Cycle Hire bikes from a 'super' docking station outside the station open from 10am today (14 December). The 126 space docking station is unveiled on the day that TfL announced that over two million journeys have now been made using the iconic blue bikes.

The new docking station is the first to be opened at a mainline railway station. It will help deal with ever increasing demand for the Mayor's flagship scheme and follows last month's announcement that Barclays Cycle Hire will expand to the east of the city in time for the Olympic Games. When complete the expanded scheme will cover 65km² of the Capital and around 8,000 hire bikes will be available from 14,400 docking points at hundreds of locations across central and eastern London.

Kulveer Ranger, the Mayor of London's transport advisor, said: "There is an incredible demand for Barclays Cycle Hire bikes at Waterloo and we have responded to this by ensuring that people using this landmark railway station can now pick up or drop off a bike at our first super-size docking station. With over two million journeys made in just under five months we are confident this expanded docking station will be of great benefit to the thousands of Londoners and visitors using the bikes."

Around 110,000 people are now members of Barclays Cycle Hire and since the introduction of casual use just 10 days ago casual customers have already made over 9,500 journeys. Transport for London also has a handy short film that shows how simple it is to hire a bike as a casual user, which is available online at: www.youtube.com/BarclaysCycle

TfL's Managing Director of Surface Transport, David Brown, said: "The new Waterloo docking station will accommodate the ever increasing demand we are seeing for Barclays Cycle Hire at mainline stations. Members and casual users are really embracing the scheme in London, they've already made over two million journeys on the iconic blue bicycles that are now a familiar sight across central London."

Mike Goggin, Network Rail's director of stations and customer service, said: "The new docking stations at Waterloo will make it much easier and more convenient for passengers who use Britain's busiest station to make cycling part of their daily journeys.

"Network Rail and the train operators are improving cycling facilities at stations all over the country so passengers can take advantage of the many benefits combining rail and cycling offers. We continue to work with TfL to explore options for Barclays Cycle Hire docking stations at other mainline stations in London to meet increasing demand."