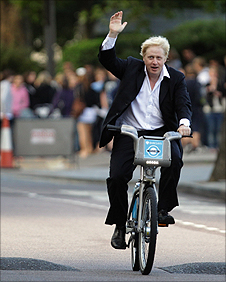 Boris riding his bike with one hand. Not so safe either, Mr Mayor

A slightly dull Transport for London board meeting today perked up a bit on the subject of bike hire safety.

None other than the Mayor himself, Boris Johnson, said:

"I see some terrifying things being done on those bikes. Only last night I saw a girl completely dead to the world wobbling into traffic .. anything could have happened."

Cue a bit of paper shuffling and David Brown from TfL meticulously explaining the measures they are implementing to try and make the bikes safe.

So far Mr Brown said there had been only a handful of accidents.

But if the Mayor is admitting there are issues with some of the cyclists using the scheme and safety, then that has to be a concern.

What else can they do though? Isn't it the responsibility of the individual cyclist?

Also on the subject of Overland rail now accepting Oyster cards, there was much grinding of teeth about the Train Operating Companies now making a tidy sum from accepting the Oyster.

I'm sure I wasn't the only one in the room who thought: "Errrr ....isn't that the same reason that TfL are giving?" You might remember the incident that happened at Mile End station last November where passengers were hit in the face by a canvas barrier. Well, one of the women who was hit suffered a facial injury and has now submitted a compensation claim.

LU is due to plead guilty to health and safety breaches - the fine could be £25,000.

If you are that lady then please get in touch: tom.edwards@bbc.co.uk

I've just been told by the Lib Dems, who received a written answer from the mayor, that the fees for those TfL bike films are:

The age of austerity?

It is scandalous that the Mayor is splashing out our money on frivolous celebrity videos, paying them £500 a second, when Londoners are facing huge hikes in fares. The Mayor needs to get a grip.

We are still some weeks away from the official report into the runaway train incident on 13th August.

The incident happened when a grinding train descended out of control from Highgate before coming to rest at Warren Street.

Initially, on the day, London Underground said the distance between the runaway and a passenger train was about 1km.

I have checked my records and on the day of the incident Richard Parry said:

"At no point were the trains within 800m - although we'll look into that as part of the investigation."

When I was leaked some footage the next week from within the signal box, sources close to the investigation said the distance was 600 metres.

Now in a report to the Board of TfL, it says the distance was "within around 500m" and it reached a speed of around 35mph.

"The braking system on the Rail Grinding Train had been isolated as part of the recovery procedure, so the two operatives .. Jumped off the RGT without injury as it rolled through Highgate station."