Using compassion to build tolerance through radio drama in Myanmar 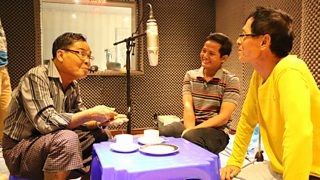 Within a stone’s throw of Sule Pagoda – one of Myanmar’s oldest and most sacred Buddhist sites – stands a Catholic church, a Hindu temple and a mosque. Worshippers rub shoulders in the nearby streets lined with crumbling colonial homes, Chinese new-builds and the hawkers who sell their wares off the potholed, sun-soaked pavements.

Yet the multi-religious diversity in downtown Yangon masks Myanmar’s darker relationship with religion.

Even when I first moved to Myanmar as a journalist for a local newspaper in 2008, the military regime recognised the media’s power to not only reflect society as it is, but to promote the society they desired. Late on a Saturday evening, we’d sit in the paper’s office, printing presses at the ready, drinking warm Mandalay beer, playing cards and waiting for the cuts from the Press Scrutiny Board (PSB), under the Ministry of Information. Everything from hip hop songs to books had to undergo censorship, and articles that challenged the idea of Myanmar as a homogenous Buddhist society were often the first to go, despite the fact that a significant minority of Myanmar’s 134 ethnic groups are Christian, Muslim or Hindu.

Later, as the military began its ‘roadmap to democracy’, telephone SIM cards went from US$2000 a pop to US$1; websites were unblocked and private internet companies were finally allowed access to the market, introducing many of Myanmar’s 54 million citizens to the internet for the first time. But alongside this opening came hate speech, fuelling further religious intolerance, particularly towards Muslims.

Even as laws were rewritten and civil society began to flourish, politicians and military actors used distrust of Muslims as a political tool to mobilise fear and sow division. Taxis, shops and offices sported the '969' supposedly ‘Buddhist’ movement, whose tenets include: Do not buy things from a Muslim shop. Do not be friends with a Muslim. Do not marry a Muslim. New laws were introduced to forbid a Buddhist woman from marrying a man from another religion.

In the midst of this, BBC Media Action – which set up its office in the country in 2013 - launched the Tea Cup Diaries, a drama designed to encourage religious and ethnic inclusion. While Facebook was being mobilised to spread hate speech and vitriol against the Rohinyga, a Muslim minority, the Tea Cup Diaries used the most-listened-to radio in the country to reach the Bamar Buddhist majority with stories about people from different religions facing the daily trials of life – trying to earn a living, struggling to care for their children and falling in love. 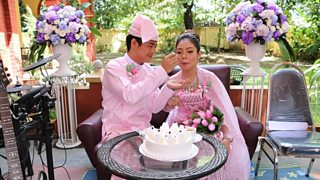 We continued to navigate this difficult space through the official military ‘operation’ in August 2017 against the Muslim Rohingya people, which forced almost 725,000 people to flee to neighbouring Bangladesh. We built on the trust we had already established with our audiences to continue our storylines.

In February 2021, the military claimed back the power it had tentatively started to share, leaving many of the people of Myanmar at war with their own military and Tea Cup Diaries came off air, though it is still active on Facebook.

Over the years, Tea Cup Diaries promoted religious and social inclusion within a space where the very concept of national identity and unity is fiercely contested.

Here are five lessons we learned for communication practitioners working on religious and social inclusion.

1. Focus on what unifies people

Our research told us people’s biggest challenges were economic worries, fear of unemployment and financial insecurity – regardless of ethnicity or religion. This helped shape the drama’s premise, which charts a family struggling with the issues audiences face every day —money, livelihoods, and their family’s future. By drawing on common fears, hopes and dreams as the bedrock for the narrative, audiences saw people of different backgrounds facing similar dilemmas, reminding them of how they share common experiences. The lead characters were a Bamar Buddhist couple, in line with the intended audience, but other main characters were from a diverse range of backgrounds.

When we dug into what people thought about other ethnic and religious groups and how they interacted, we discovered people often lived ‘side by side, but not together’.

Not many people had casual friendships with people from different religious or ethnic backgrounds and where people did interact, it usually happened outside the home, in local tea shops, at work and, for young people, at school. This meant many people did not have the opportunity to understand what different religions practice and believe, which made them vulnerable to widespread misinformation and hate speech. This helped shape the story of the drama, which charts a couple starting their own tea shop on the outskirts of Yangon—a place where a diverse range of characters would realistically mingle, interact, and chat.

Our research also told us there was a perceived hierarchy of religions—especially among the Bamar Buddhist majority. They felt Hinduism was most similar to Buddhism. They related less to Christians, and felt they had least in common with Muslims. They did not feel Rohingya Muslims were even part of the country.

Our drama therefore approached different religions differently. To challenge misunderstandings about Christian beliefs, James, the young tea shop waiter, was a central character over several years. The audience watched him grow up, get baptised, go to Bible camp and sing hymns at Christmas. Our introduction to Muslim characters was more gradual. They initially featured as secondary characters, becoming more central as the audience warmed to them.

3. Use formats that invite audiences to step into another’s shoes

When James, the young tea shop waiter, knelt in his church, the audience were able to hear him praying. For some in our audience it was the first time they’d been given the opportunity to understand Christianity from what it might sound like inside a believer’s head. As one woman from Labutta described in our qualitative research: ‘I got to know that they (Christians) pray to their God, Jesus, in difficult times. It’s mostly the same as what I do when I get sad; I pray and count beads.’

Dramas and soap operas are particularly powerful at inviting audiences to step into another person’s perspective. Research suggests that when audiences are immersed in a fictional narrative, they often experience attitude and belief change in line with those expressed in the story (Green, 2021; Nabi & Green, 2015). Given the sensitive nature of religious and social inclusion, drama offered our audiences an opportunity to understand people from different backgrounds - not just through theoretical knowledge, but by getting to know their struggles, desires and fears up close and personal.

4. Use feedback from audiences to shape production decisions – particularly around highly contested themes

Given the sensitive nature of some of the issues, and the changing socio-political landscape – including the Rohingya crisis in August 2017, continued armed clashes between ethnic groups, increasing levels of fake news and misinformation fuelling ethnic and religious tension - it was important to keep abreast of how audiences were engaging with Tea Cup Diaries.

Every two to three weeks, audience panels helped our production team understand how audiences were reacting to and engaging with the drama, so they could adapt quickly to emerging trends. In particular, they helped us understand how far we could press different inter-ethnic and inter-religious relationships. For example, our audience grew fond of a storyline involving a romantic relationship between Sam (a Karen Christian man) and Htet Htet (a Bamar Buddhist woman). But a friendship between Inn Gine (a Buddhist woman) and Naing Gyi (a Muslim man) did not develop into a romantic relationship, as it was clear from the audience panel that this would not yet be acceptable.

Attitudes towards different religions are often deep-rooted and take a long time to shift. But, while research participants had mixed views on storylines with inter-ethnic and inter-religious friendships and relationships, our survey analysis found the more engaged people were with the programme, the more likely they were to accept such relationships, compared to those who do not listen. Listeners who were more engaged with the drama were 1.6 times more likely to discuss issues relating to ethnic and religious tension, compared to less engaged listeners. Listeners who were highly engaged were 1.9 times more likely than non-listeners to demonstrate higher levels of acceptance towards inter-ethnic and inter-religious relationships. And people who regularly listened to Tea Cup Diaries were 1.6 times more likely to have higher levels of knowledge about religions other than their own compared to non-listeners.

In a context as fractured as Myanmar, where the media is all too often a tool for sowing distrust and division, the Tea Cup Diaries drew on that most traditional of Buddhist qualities – compassion – and in so doing, opened up space for greater tolerance and understanding.

Becky Palmstrom lived and worked in Myanmar from 2008-2009 and again from 2011-2015. She was part of the Rohingya refugee response in Bangladesh, 2016/2017 and is currently a senior advisor on governance and rights for BBC Media Action.

BBC Media Action is committed to highlighting and celebrating religious diversity and inclusion in our programming and our ways of working.

How poo became one of our biggest creative challenges yet