The truth about health misinformation: it’s not just about fact checking

Imagine: Ebola is spreading in your city and you’re scared. You see a tweet from a friend saying you can avoid catching Ebola by drinking or bathing in salt water.

What would you do?

Last month, I recalled this story at a technology and ideas hackathon called CredCon. The event aimed to address the challenges of reducing misinformation online, and I was there to lead a session on health misinformation. Many clever ideas were being hacked out, from building tools to help people – and, importantly, their social networks – be more aware of their sharing habits, to using machine learning for credible news curation.

Almost daily we’re hearing about news-focused misinformation, often around politics. BBC Media Action helps to build media literacy and awareness of fake news, but we see misinformation from a wider humanitarian perspective too. We use media as a tool to engage people with information that can help them lead healthier lives.

As I’ve been working in the field of health communication for nearly 20 years, the CredCon organisers thought it could be useful for me to share approaches used in this field with those interested in combatting misinformation in other contexts.

It is important to make a distinction between what I’ll call acute and chronic misinformation problems.

The salt water Ebola example was a real life case of acute misinformation in West Africa. News reports tracked this rumour to a text message from a student in Nigeria. It spread immediately to social media, with hundreds of tweets repeating the rumour in the following couple of days. In just as many days, the Nigerian Ministry of Health, the World Health Organisation and others corrected it across traditional and social media, and the rumour was quashed. Sadly, this misinformation was responsible for at least two deaths and many people were hospitalised due to excessive consumption of salt water.

That’s an acute scenario: where misinformation spreads rapidly, then is corrected by multiple trusted sources and goes away. Efforts to validate the credibility of online content and improve standards around sharing on social media platforms will help stop the spread of acute misinformation.

Algorithms, and the market forces underpinning them, are designed to capture attention, and in turn provide a breeding ground for misinformation to spread. Tweaking algorithms to direct people away from non-credible sources or annotating articles with credibility warnings may be part of a solution; however, these efforts do not address the longstanding beliefs people may already have about a health issue.

Beyond the facts to attitudes and beliefs

What drives healthy behaviours? Understanding this is standard practice in health communication. While knowledge of a given health issue is important, we all know our behaviour is rarely determined just by this. After all, many of us engage in unhealthy behaviours we know aren’t good for us.

Looking beyond the accurate facts that inform healthier choices, we need to explore whether attitudes and beliefs – i.e. what people think or feel about something – could shape health behaviour. For example, if you don’t think you are at risk of contracting an infection, then you are unlikely to do something to prevent it.

During the Ebola outbreak in West Africa, people were told that traditional burial practices, such as washing a body before burial, were very dangerous. But the belief in the importance of this practice and what it meant for a loved one’s afterlife was far more powerful than being told it was a life-threatening behaviour from a medical view.

These deeply rooted beliefs needed to be addressed head-on. Research was required to find out what the prevailing beliefs were and who people would trust. Amplifying the voices of priests and imams on local radio and social media who supported alternative and safer burial practices was a significant turning point in the response. Here, the messengers were critical to helping overcome the attitudes shaping people’s behaviour.

That said, an attitude that is open to change, armed with the facts, still may not be enough. 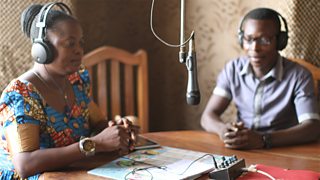 Challenging norms in the echo chamber

What if a person’s attitude contrasts with prevailing social norms? These are unwritten rules around what we think others do, and what we think they expect us to do, which influence how we behave. Online echo chambers are our enemy here and clearly limit exposure to alternative norms. Luckily, both social media and traditional media, such as radio or TV, can help challenge existing norms and model new ones. Drama in particular has the power to subtly show social and cultural dynamics and play out taboo issues in a sensitive way.

As part of BBC Media Action’s Ebola response efforts, I led a team to create a radio drama, produced in five West African languages, for broadcast on community and national radio stations across the region. It dramatised very real situations about Ebola, such as a conflict within a family about how to deal with the fear of taking a child to a treatment centre. Drama can tap in to observational or social learning – by listening to or watching the consequences of characters’ decisions, people will draw parallels and practise what others do.

These are just some of the behavioural drivers health communicators consider when using media to help shape health behaviour. Our full list is in this BBC Media Action Guide to Health Communication.

Misinformation is a huge problem and human behaviour is complex. There is not one antidote or treatment plan. Rather, a multi-pronged approach is needed. For those interested in strengthening content credibility, invest not just in computational solutions but in the emotionally driven ones as well.

Missing: A cutting-edge hub for risk communication for action

Gender is not destiny: Turning Indian girls and boys into allies through TV drama