One can’t talk about design without quoting Steve Jobs.

“Design is a funny word," he said, "Some people think design is how it looks. But of course, if you dig deeper, it’s really how it works.” He hit the bullseye as always. Look at the success of design-driven companies like AirBnB and Pinterest, or even digital giants like Google, eBay and LinkedIn, who have invested in the design of more engaging and differentiated user experiences.

During the last couple of years, human-centred design has acquired a somewhat elusive and awe-inspiring reputation among donors and implementers. Everyone wants it, yet struggles to see how it can fit in with achieving development goals.

At BBC Media Action, we use the power of media and communication to create social and behaviour change. For a lot of our work, like the mhealth services Mobile Kunji, Mobile Academy and Kilkari, we have been using human-centred design, long before it became a term de jour! “Admittedly I flip between being overjoyed that many in the development community have suddenly bought into design thinking, and being frustrated that this is seen as something new,” says my colleague Yvonne MacPherson, BBC Media Action’s US director.

Now that human-centred design is trendy, we need to make sure it is not treated as a separate, add-on activity or process. It is integral to “doing development”. Donors are now putting out separate calls for proposals just for human-centred design, presumably to support other implementation efforts.

This then begs the question, why are all implementers not using human-centred design principles in their work? And if they are not, what could be the reasons—lack of resources, time or access to technology? Which brings me to the biggest myth around human-centred design—that it can only be used to create digital or tech solutions. Which is why, I will use a no-tech (not even low-tech!) innovation to talk you through the process. This is a tool we have created for pregnant women in Bihar, where 60% of women aged between 15 and 59 years suffer from anaemia, the silent killer.

1. Empathise/immerse – to create meaningful innovations, know your users and care about their lives

The problem with most pregnant women in Bihar is that even though they know what to do, compliance with whatever has been prescribed or is necessary is a challenge. Pregnant women not completing the full course of iron folic acid (IFA) tablets is a major issue. They start and then stop because of side effects. They also have no idea why this supplement is so critical because they have no understanding of the connection between their blood count and the baby growing inside them.

2. Define/mine the insight – frame the right problem and dig out the right insight to create the right solution

So what would help women stay the course? Creating risk perception. A mother’s body is like a factory that must produce blood for a healthy baby. Can she afford not to do this ‘most significant’ bit for her unborn child? Could we therefore ‘re-engineer a blood factory’?

How to show a rural woman (without access to ultrasonography) the baby growing inside her? How to explain visually the blood factory– the link between mother and baby through blood? How to use emotion to ensure compliance? How to use language moored in popular culture to convey a simple doable action? How to nudge the woman to take the same action every day over 180 days?

4. Prototype – build to think and test to learn

We created a paper-based prototype in three parts called Khoon ka Rishta (bloodline). The frontline health worker (FLW) would use one part to explain to women in a group how IFA tablets help create the bloodline between mother and child, and how missing even one tablet could actually break that line.

The second part of the paper, to be kept by the mother, carried an illustration: the outline of a baby’s body, with teardrop-shaped gaps inside. This paper prototype also included the entire course of IFA tablets and strips of teardrop-shaped adhesive bindis, to fit the gaps. 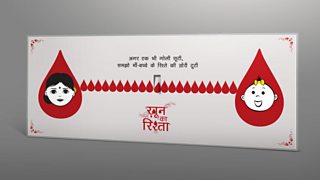 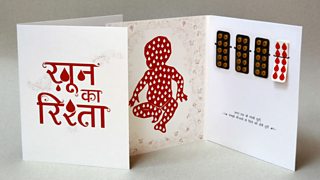 As the mother would take a tablet, she would use the red bindi to cover up those gaps in the baby’s body. And as she would complete her course of 180 tablets, she would watch this baby becoming whole.

The third part was a card with a congratulatory message using the same teardrop graphic.

5. Test – learn about your solution and your user

What did we learn? Both types of user - frontline workers and pregnant women, understood and liked the tool. But it needed to be simplified. So, we eliminated some details, redesigned a few and made instructions crisper and clearer.

Women engaged with the tool at an emotional level—it provided a visual and vivid reminder of a deep connection: “I’m taking a tablet and that’s helping my baby form and be whole and healthy.”

A quick, second round of testing helped ensure we had incorporated all the feedback.

The tool has been in use across eight districts in Bihar for over a year. A state-wide scale up has been planned by the government on the basis of an impact evaluation study we commissioned. It shows that:

Anecdotally, chemists are saying they have noticed an increase in sales of IFA tablets, because, even when women cannot get them free from the system, they are buying the tablets because they realise how fundamental they are to the health of their babies. We have used human-centred design to create tools for other products and services that are available at village health sanitation and nutrition days, such as contraceptives, oral rehydration salts for diarrhoea management and complete immunisation. These tools are non-digital yet innovative.

This proves something else as well: keeping the user front and centre, resetting the paradigm, checking ideas and assumptions and learning from failure are not very different from how communication gets done in the first instance. But if you want to walk the tightrope between disruption and delivering outcomes, this approach definitely helps you to be surefooted in creating innovative solutions to problems of every kind, whether you are in Silicon Valley, or Bihar.

What the development sector can learn from audience segmentation

How we attracted women to our shows