The COVID-19 WhatsApp service by WHO - is it effective?

On March 20, the World Health Organization announced its latest tactic in its fight against COVID-19 – a new ‘Health Alert’ information service on the popular Facebook-owned messaging app, WhatsApp. Users simply sign up to the service by sending a ‘hi’ message to one of seven Swiss phone numbers – one for each of the seven languages offered. It replies by asking subscribers to select from a list of information options ranging from the latest COVID-19 numbers to myth busters.

With 2 billion users, WhatsApp is an ideal channel for the WHO to communicate trusted health information to people around the world – not least because the messaging app has also become a conduit for mis- and disinformation about COVID-19 – covering how it spreads, symptoms, false cures and conspiracy theories. With over 5 billion mobile phones users globally, this service meets people where they already look for information. And with information about the virus changing daily, a health alert from a reliable source is needed now more than ever.

This is not the first time WhatsApp has been used during a global health emergency. In 2014, BBC News created an Ebola service on WhatsApp in English and French, which at its height had over 25,000 subscribers, most of whom were in West Africa where Ebola was most prevalent. Here at the BBC’s international charity, we also created a Krio-language version in Sierra Leone at that time, which gained 14,000 subscribers.

Advances in technology mean the WHO service has in some ways improved upon the BBC experience. Unlike the WHO’s informational bot service, the BBC services allowed subscribers to send messages to the news and charity teams running the services – which were read by humans, rather than generating automated responses. Having people text or record their questions back to the BBC provided a window into what ordinary people were talking about, what questions they had and what rumours were going around. This helped inform how best to respond to the needs and questions of those facing Ebola in their communities. But this feature presented a huge challenge of managing an incredibly high volume of messages – a prospect which would be untenable for the WHO’s service. It is reported to have racked up 10 million subscribers in the first four days.

Learning from Ebola
There are lessons that the WHO can take from the BBC messaging app experience.

At the height of the Ebola crisis, the BBC provided content about three times a day: much of it information from the WHO, the Centers for Disease Control and UNICEF. WHO’s Health Alert, by contrast, is demand-driven. Users ping the service to request the latest information from the original option list, rather than messages being pushed out at regular intervals. Some may consider this a considerate approach to avoid unwanted spam. But if I’ve been busy for a couple of days and not had a chance to ask the alert what I want to know, it stays silent. Sending me what I need to know each day would keep me better informed.

The appeal of WhatsApp lies in its full potential – including audio and visual messages, which are particularly useful for users with low literacy levels. The BBC’s content included images, text and audio clips (video was avoided to reduce the burden on data). BBC Media Action’s Krio version even included a serialized Ebola radio drama.

But the WHO content is still text-heavy and not yet share-worthy; even its emojis are hard to locate or interpret. It feels more likely to appeal to educated officials than to a general audience. 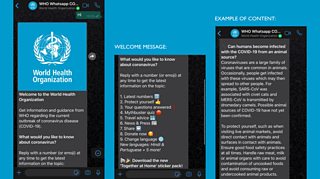 This week the service added a new feature – “Together At Home” stickers (character-driven emoticons) – perhaps to broaden its appeal to a wider audience. The same 21 stickers, like one tie- and fluffy slipper clad character holding a laptop, appear whether you download them in English, Arabic or Hindi. This feature could help people reengage with the service, though without a push notification alerting subscribers to the new feature, they would have to be paying attention to tech news to learn that it exists.

Global yet local
The WHO WhatsApp service will help fill the need for factual information disseminated from a trusted global health authority. But it is not always enough for health information to be credible. It also needs to be effective. For health information to be most effective, it needs to be grounded in the local culture and realities of the people it is intending to reach. For example, how does a child wash her hands when there isn’t soap or clean water, or when she lives in a village where one tap is shared by a whole community? How do people practice social distancing when multiple generations live in a small space?

To address these questions, there is a critical and urgent need for more localized, audience-specific COVID-19 content that acknowledges these challenges. In the Ebola crisis, the international community learned that engaging at the community-level was what helped to finally turn the corner on new infections. The best way to achieve localised, culturally relevant health content is for it to be created by people from those countries and cultures. 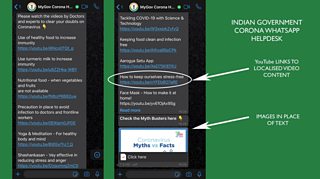 Acknowledging this need, WhatsApp has collaborated with national governments to create similar COVID-19 information services that are country specific. The Indian government’s MyGov Corona HelpDesk WhatsApp service, for example, includes graphics and YouTube links to short videos – helpful and more appealing to users for whom lengthy text is problematic. The content is couched in relevant cultural references, even using cricket analogies to highlight that while the pitch conditions may appear favourable, but we still have to observe the restrictions of the lockdown.

The WHO is central to the provision of credible information about COVID-19. Its role, along with others who localise and package this information into compelling and relevant content, made available on popular mass communication platforms such as messaging apps, will help meet the evolving information needs of people around the world.

How media and communication can help close the gender equality gap