How poo became one of our biggest creative challenges yet

How many of us ever think about what happens after we flush?

Yet it’s an issue that concerns governments, sanitation experts, urban planners and public health specialists around the world - particularly in India, where 60% of urban India is not connected to modern sewage systems and relies on on-site sanitation such as septic tanks and leaching pits. This makes faecal sludge management (FSM) a pressing but hidden public health issue.

That’s why five years ago, Madhu Krishna, then deputy director of WASH and communities at the Bill and Melinda Gates Foundation India, gave BBC Media Action this challenge:

“Could you make faecal sludge management an issue that is as important to people in urban India as air pollution has become? Could you get people to care about what happens after they pull the flush?” 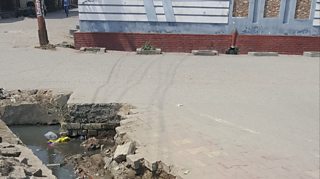 Since the launch of the ambitious Swachh Bharat Mission (Clean India Mission) in October 2014, India  has made huge leaps forward in building toilets and eradicating open defecation. But faecal sludge management - or what happens to poo after you flush, how it is contained, when to empty the tank and where it ends up - was not getting as much thought as it deserves.

Our research showed that the predominant attitude among our audiences was to flush and forget about faecal sludge, or avoid the problem for as long and by any means possible – including by building enormous septic tanks that do not need cleaning in their lifetimes. As one man from Trichy in the southern state of Tamil Nadu told us: ‘’I have built a big tank so that we don’t have to clean in frequent intervals. Why should I empty the tank if there is still so much space?”

According to a 2019 WaterAid report, adequate facilities and services for the collection, transportation, treatment and disposal of faecal sludge do not exist in most Indian cities. Private operators – often using illegal, manual methods – may even dump faecal sludge in drains, waterways, and on land. This untreated sewage contributes to high levels of diarrhoeal disease, which is responsible for more than one in 10 infant deaths in India. Faecal sludge is the largest polluter of ground water in urban India.

Our mandate was clear: how do we first make faecal sludge a problem you cannot ignore? How do we make the invisible, visible?

Our campaign #FlushKeBaad illustrated the sanitation value chain so that people could understand what happens after flushing. Credit: BBC Media Action

Combining the art of drama with behavioural science

We examined our audience’s attitudes towards desludging, and the type of containment system they own, to help us identify three audience segments: proactive desludgers (22%), reactive desludgers (the majority – 66%), and connected to drains (11%).

We knew people weren’t making ‘optimal’ decisions when it came to sanitation and septic tanks. In fact, they departed from what traditional economic theory would classify as ‘perfect’ rationality in specific and predictable ways. For example, many focused on the short-term gains (e.g. not paying for regular desludging), and ignored both the long-term benefits (e.g. protecting water resources and ensuring the well-being of families and communities) and uncertain future costs (e.g. repairs or system failure).

Behavioural economists call this ‘present bias’. We needed to reach these ‘procrastinators’ as well as those who hadn’t thought about what happens after they flush. We also set out to frame the link between faecal sludge disposal and health as a positive gain, because we know people's choices are heavily influenced by inertia and avoiding losses.

We wanted to increase awareness about correct FSM practices – regular desludging, building the right kind of septic tank and asking where your poo is being dumped - and to heighten the sense of risk.

The drama focused on two triggers or framing effects – risk perception and social disapproval - which would make urban populations take either individual or collective action to bring about change.

Everyone likes a good story – particularly in India with its rich oral history and huge film and television industry. Working with national broadcasters gives drama unparalleled reach and scale. And we know drama works - it can be an incredibly powerful force for positive social impact.

But we don’t mean ANY drama. We mean locally produced, culturally relevant dramas that are developed using behavioural insights and informed by communication theory. These dramas are tested with audiences before they go to air, to ensure they deliver on engagement, entertainment and communication objectives.

Evidence demonstrates these carefully crafted narratives - sometimes called edutainment or drama for development - not only inform, educate and entertain. They can also prompt discussion, influence and challenge social norms, inspire intent to act and change behaviour.

Drama can be particularly effective because it engages people on an emotional level, unpacking complex issues and making them easier to understand, so they stick in people’s minds. Role-modelling positive behaviours over time can change mindsets – even around deep-seated behaviours and norms.

“Academics have demonstrated the link between what we see and how we behave. Narratives have the power to shape our mind and action. Navrangi Re! through powerful storytelling demonstrated that narratives can aid in unpacking a complex subject like faecal sludge management, and increase cognitive understanding of related actions. Narratives can introduce role models, new ways of working, frames of reference, and novel ways of decision making, which when emulated by people establish new norms in a subtle and acceptable manner.”

Taking these behavioural insights, we did two things no one had tried before in India.

First, we developed a public-private partnership around a drama on a social issue. While India has a long history of using using drama for social and behaviour change, it had always been in association with the public broadcaster, Doordarshan - not the private sector.

And then, we did what some might deem crazy: We created India’s first – and possibly the world’s first – drama on faecal sludge management. 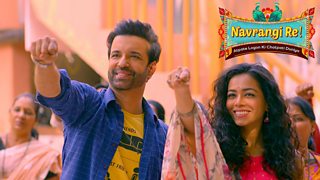 The main characters in our hit comedy-drama, Navrangi Re! Credit: BBC Media Action

The art and craft: our neighbourhood and our characters

Navrangi Re! (Nine to a Shade) is the story of an urban neighbourhood – a mohalla - where lots of different people live cheek by jowl. Through the trials and tribulations of life in an urban jungle, they find ways to overcome this constant crisis mode. The mohalla is a creative device to accommodate an entire socio-economic microcosm, with different families occupying different points on the sanitation value chain.

The lead protagonist, Vishwas, is a struggling TV journalist whose name means trust. His love interest – Chitralekha – is an aspiring bureaucrat, preparing to take her entrance exams. They represent two contrasting approaches to working with communities – she is authoritarian, he is a negotiator. It is the marriage of the two approaches that leads to a community transforming. Chitralekha and her father, retired army man Gajraj – do everything right: they have a toilet with a proper septic tank that they desludge regularly. Gajraj represents the ‘proactive deludger’ segment from our research.

Rajrani – the name means empress – is the local ‘don’. She and her son Kabaadi Seth, or scrap mogul, represent the ‘reactive desludgers’ segment. They have a palatial home with a toilet and a septic tank, but they have never desludged their tank.

There are others like Naseer the tailor, his wife and son, who use Seelan Deewar – the damp and decrepit community toilet, which is owned and tightly controlled by Rajrani. And there is Lota, the mohalla errand boy – whose name means the ubiquitous water container that people use to clean up when they defecate.

The mohalla and the characters are based on insights from our formative research, reflecting real desires, values, self-image, sense of pride and dignity and aspirations for a better life. Navrangi Re! has all the elements you would expect from a prime-time drama – romance, humour, conflict, pathos, villainy and even a talking wall! 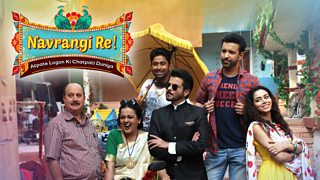 Did the risk pay off?

Yes! At the end of 13 weeks, Navrangi Re! had reached 59.6 million unique viewers through three Viacom18 channels and its OTT platform. It was viewed equally by men and women across all age bands. It was also ranked among the Top 20 shows on General Entertainment Channels at 9 pm, as per data from the Broadcast Audience Research Council of India (BARC). We were delighted – and a little relieved – that we had taken faecal sludge management mainstream!

This approach identified households to be interviewed before and after the show aired – and they were retrospectively allocated to treatment and control groups, based on whether they watched Navrangi Re!. In this way, it was possible to compare outcomes among those exposed to the TV show with those unexposed in the panel of 2,959 respondents.

Researchers found that 37% of those who watched at least one episode showed intent to do something about their faecal sludge, rising to 78% of those who had watched at least seven episodes. There were significant improvements on audience’s attitudes towards regular desludging, willingness to save to pay for this, and a desire to improve the quality of existing septic tanks.

Researchers also found that viewers engaged emotionally, with 78% of viewers saying that they felt happy after watching Navrangi Re!, and more than two-thirds said that they would like to watch more episodes in the future. The show was particularly successful at stimulating conversations between viewers and their family and friends on faecal sludge management.

The impact evaluation showed that storytelling can help bring about social and behavioural change on a hard-to-address topic like FSM. Our follow-up, seven-episode web drama called Life Navrangi has just released on YouTube. It continues Vishwas’s story and the conversation on urban sanitation in India.

“FSM is not only an infrastructural issue but also a socio-cultural issue. It is critical to acknowledge the need for FSM because it has a considerable impact on public health, climate, and environmental pollution. Navrangi Re! opened our eyes to the role of media and storytelling in combatting this public health crisis and we welcome this second series with new and exciting storylines.”

We hope Navrangi Re! can inspire others to use innovative partnerships to leverage the creative power of narratives. Only by making invisible social problems such as urban sanitation visible will we really see greater public engagement.

When we combine the science, art and craft in this way using our Narrative Engagement Model, three key principles are vital:

Because after all, everyone loves a good story - even one about poo! 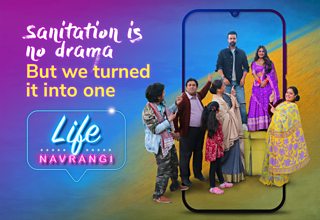 The cast of Life Navrangi - our follow-up to Navrangi Re! Credit: BBC Media Action

Our followup series to Navrangi Re! - Life Navrangi - is now live on YouTube! Subscribe to Channel Navrangi and don't miss an episode (in Hindi with English subtitles).

Learn more about the Navrangi project, and its independent evaluation (third party site).

Learn more about our work in India.

Using compassion to build tolerance through radio drama in Myanmar