How media and communication can help close the gender equality gap

It has been 25 years since the Beijing Declaration and Platform for Action – an ambitious roadmap of 12 critical areas which, if addressed, would ensure women’s active participation in all spheres of public and private life.

These are important goals which are central to whether societies, communities and families thrive.

But for too many women and girls, these are also still generations away. In many societies and cultures women are still closed off from public life, and concepts like equal decision-making, a choice of work and equal pay, the right to choose if, who and when to marry, and if or when to have children are all still unfathomable.

At BBC Media Action our research shows inequality is often rooted in rigid expectations about a woman’s role – and that inequality won’t shift until those expectations do. A brand-new school, for instance, might help convince families to invest in girls’ education – but they may still view it as a path to a better marriage and motherhood, rather than their human right, as our research found in South Sudan. A community might condemn violence – but then qualify it as acceptable if a wife “does not fulfil her duties” or chooses to use a modern contraceptive, as we have found in communities stretching from rural Zambia to the refugee camps of Cox’s Bazar. Women also tell us that they rarely speak out about violence, for fear they will be socially ostracised.

This is where media and communication come in: challenging old ideas and beliefs, opening space for conversation and self-reflection, seeding hope and expectation of something different, and eventually shifting the fundamental norms that can hold women and girls back.

Space for light to flicker

Media can and often does perpetuate stereotypes. But used responsibly and sensitively, it can also be a creative and engaging public platform that tackles some of the deepest-rooted beliefs successfully.

In Afghanistan, with some of the most restrictive gender norms in the world, Media Action has a ground-breaking programme to support female journalists. We helped connect these brave women through training, a private social media group, and in an annual conference – helping them inspire and support each other to carry on. 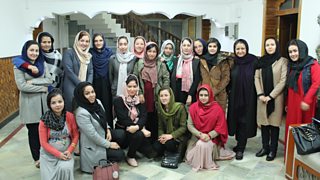 “The programme was awesome and unique, where everybody had the opportunity to openly discuss and share ideas… it was the first programme where men didn’t occupy the front row of chairs,” journalist Razia from Balkh province told a Media Action project officer.

We have also worked with them and their male colleagues in ensuring radio programmes and working environments that are more sensitive to gender rights. This means efforts like introducing a new inspirational female character that starts her own business on the New Home, New Life programme, a radio soap opera made by our partner Afghan Education Production Organisation, which airs on the BBC Afghan service and is the country’s most popular cultural radio programme. Her storylines needed to walk a careful line between being plausible in a conservative environment, while demonstrating more equal gender roles and opportunities.

We know that development cannot effectively progress gender equality if it does not also open up conversations that build understanding of what equality really means. This is true of discussions around education, of gender roles in the home and workplace, and of economic well-being.

In Somalia, our new weekly national radio magazine programme, Making Waves, inspires women to start small businesses, by building their knowledge of finance as well as their confidence. But knowledge alone isn’t enough: an essential aspect of this programme is to feature local leaders, inspiring testimony and discussions that encourage husbands and fathers to also see this as normal. They, too, need to understand the possibilities and successes, and change their own understanding, in order for this progress to be sustained in the longer-term.

It's hard to be what you can't see

Twenty-five years on, there is progress – but particularly in the Global South, that progress is not fast enough.

Girls are more educated than ever before, but still less likely than boys to complete secondary school – because of money, insecurity, early and forced marriage or early pregnancy. More women have access to employment – but they are still more likely to work in entry-level jobs and to be paid less than their male counterparts, while still shouldering a heavier load of unpaid care work.

And at least one in three women still experience physical and/or sexual violence from a male partner in their lifetimes, with many gaps in laws that might protect them, not enough essential services and not enough focus on prevention.

When it comes to decision-making, women and girls are also participating and voicing their concerns more than ever before. But they are still consistently under-represented at all levels - whether in formal institutions, such as parliaments, or in informal structures, such as community groups or within households.

We have made strides forward, but if you look deeper, women and girls continue to experience multiple and intersecting forms of discrimination, vulnerability and marginalisation throughout their life cycle.

We will not change this, or realise the vision of Beijing, without the ideas and public conversations that shift the fundamental norms around gender.

Media’s existential crisis and the consequences for peace