On the front lines of the climate emergency, information is a critical defence

In a time when people have begun to talk about Earth’s climate emergency, it is understood that climate change is already happening: in the countries in which BBC Media Action works, our communities are already experiencing increasing and increasingly powerful droughts, flooding and extreme weather. The poorest people are the ones who feel the impact of this increasingly variable weather most, and who find it hardest to recover.

Helping people cope with these changes is an even more important part of our work. Small actions can make an enormous difference in each family’s ability to survive extreme weather and better protect their homes and livelihoods.

Our work across Asia builds on the evidence collected in our seven-country, 33,000 people research study, Climate Asia, which helped us understand how our audiences are responding to the impacts of climate change, and what role communication can play in improving their lives. 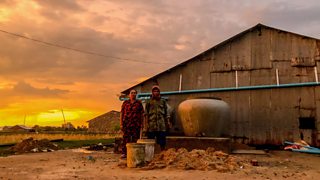 A Cambodian family we supported to build a new fresh water collection system on their roof, as part of our climate TV show Don't Wait For Rain

In Bangladesh, we found that while people are aware of the increasing frequency and severity of changes in the weather, they did not know how to respond. Measures such as diversifying crops, storing food and water for use in an emergency, working together to improve local infrastructure and finding new and more diverse ways of earning income are all steps which communities can take to help protect themselves.

This is where communication for development is at its most valuable: encouraging communities to work together to improve their preparedness for extreme weather events, and to improve their economic wellbeing.

We have now completed three series of a major reality television show aimed at doing just this. Amrai Pari (Together We Can Do It) visited communities in the most susceptible areas of the country as they work with their neighbours and, in some cases, with local government disaster management committees, to strengthen storm defences in fishing areas, make cyclone shelters child-friendly, grow new resilient crops or start new businesses. In this way, the programme inspired and informed people, providing an opportunity for communities to share their knowledge and work together to create something vital for their welfare and livelihood. Encouragingly, it has been equally popular amongst women and men across all three series.

Our research shows that it works: 78% of the audience of Amrai Pari felt it improved their understanding of how to cope with weather-related changes. Some 47% of Amrai Pari viewers said they had taken action as a result of watching the programme.

Further analysis has demonstrated that exposure to Amrai Pari was associated with increased self-confidence to take action, increased awareness of risk, increased knowledge, and an increase in talking with others about taking action. People who regularly watched Amrai Pari or saw associated public service announcements were more likely to take action than those who didn’t. 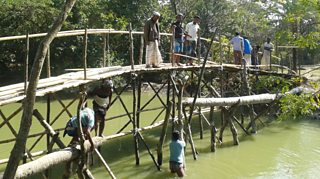 Building sturdy bridges in Bangladesh as part of our show, Amrai Pari

In Cambodia, our audiences are already experiencing the impacts of changes in the weather and the environment, particularly on their health and income. Eighty-one percent of respondents to our recent Cambodia Climate Asia survey feel these changes have affected their ability to earn money. With most people’s livelihoods dependent on land, it is concerning that half of those surveyed feel that agricultural production has decreased over the last decade, and three-quarters think the number of fish has declined.

Our climate TV show, Don’t Wait for Rain, is aimed at the audiences in Cambodia who are most vulnerable to climate change. The series showcases easily replicable and affordable techniques that people can use to protect themselves against the effects of extreme weather, such as flooding and drought. It also explores the reasons that may prevent people from planning for extreme weather in the first place, such as financial worries or a lack of confidence in trying something new.

In our survey, 37% of respondents said that they weren’t responding to climate change out of fear of discussing their actions with others, and 35% said that it didn’t fit with their religious beliefs or community culture.

We knew that building trust would be key in helping people adapt to new techniques, and that audiences would need to see people they could relate to in the show adapting these new techniques successfully to be encouraged to try it out for themselves. That’s why in each episode we pair up an ‘impact’ community struggling to cope with weather with local experts who have overcome climate challenges. 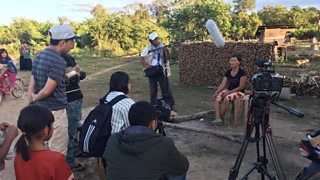 We are proud to say the show just won an award for “Best TV Feature on Climate Change” at the 4th Asia Pacific Broadcasting Union (ABU) Media Awards on Climate Change and Disaster Risk Reduction.

Our work extends beyond creating engaging, creative content and programmes to inform, educate and inspire our audiences. We also work with a range of civil society organisations and broadcast media partner organisations, to improve their understanding of the important role of media and communication in ensuring people can take effective action – both on their own and collectively.

For communities and countries already on the front lines of the global climate emergency, information, connections and innovation are all essential elements in helping prepare for disaster, and improving their ability to recover. 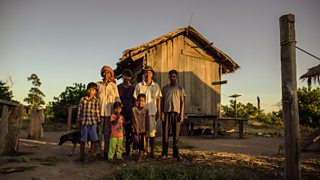 A Cambodian family with their newly constructed storm house, featured on Don't Wait For Rain

Media’s existential crisis and the consequences for peace