With all due respect to lovers of lazy afternoons spent reading new books for free and fans of cheap kitchens, trying to keep the likes of Borders and MFI from ruin is not quite the same thing as rescuing Rangers.

Borders' typical customer might write an angry letter about its demise to a broadsheet but they are unlikely to chant obscenities at you for 90 minutes on a Saturday afternoon. And the death throes of a furniture chain were meat and drink to the Financial Times but they were not the stuff of front-page splashes in the tabloids.

That, however, is the situation Paul Clark and David Whitehouse find themselves in now as the joint administrators of a Scottish institution and global football brand.

The bankruptcies of Borders and MFI were no doubt painful for all concerned, particularly the staff, but they will seem like minor disappointments compared to the apocalyptic gloom that will descend if the Duff & Phelps pair lose Rangers.

Back on Valentine's Day, when Clark and Whitehouse were given the job of saving "the world's most successful football club", many felt only a miracle would prevent Rangers' 140-year history from coming to an abrupt end.

A dramatic first fortnight in financial intensive care has convinced some that this will be a long and messy administration, with lots of litigation. But I am now no longer so sure Rangers will be wound up.

It is right to fear the worst for Rangers Football Club plc, but it could be argued that the football team fielded by that company will end up playing football for a company with a very similar name, in the same colours and the same league. 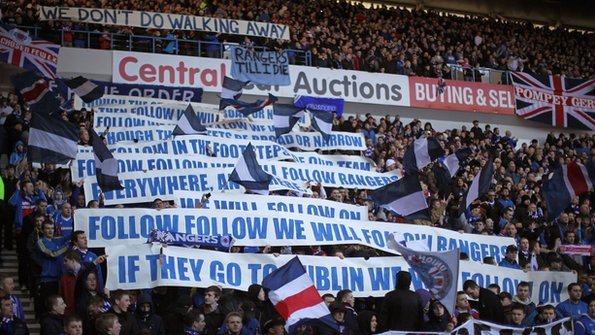 The Scottish champions spend at least £10m a year more than they bring in, they have almost no chance of being allowed to play European football next year (a situation that will only exacerbate their annual deficit) and they are a few weeks away from being presented with a bill they cannot settle.

That Rangers will lose their appeal against Her Majesty's Revenue and Customs (HMRC) in the now infamous "big tax case" is no longer up for real debate. What remains uncertain is how badly they will lose.

Will it be the knockout for HMRC that some have suggested (up to £75m in back taxes, interest and penalties) or a partial defeat of perhaps as little as £10m?

The size, timing and very existence of this tax dispute has been a topic of fevered debate for over a year, so it is hardly surprising that it should take on almost mythical proportions now.

But here's the thing, Rangers' debts are so great that the actual number spat out by the tribunal does not really matter - £10m, £30m, £50m...it is just another 'IOU' to add to the pile.

Rangers are not in administration now because of the reckoning that is coming for their alleged abuse of tax avoidance schemes going back to 2001. They are in the mire now because they have been using "the bank of HMRC" to fund the club's activities since May.

Winning the case is still vital for HMRC (see Tuesday's surprise move against Barclays for further evidence of the taxman's clampdown on those who do not pay their dues) but that has more to do with the City of London than the city of Glasgow.

Rangers, on the other hand, just need this to be over. They need the certainty of a number - it almost does not matter how big that number is.

So forgive me if this sounds like heresy but the big tax case has become a sideshow.

The real issue is how much money can be recovered from this horrible mess. Will taxpayers get a better return from a company that can still sell tickets for games at Ibrox next year or will more money be raised from a fire sale?

A few weeks ago I thought HMRC might opt for the latter, if only to put a great big head on a stick and wave it menacingly at the rest of British football. But the background noises coming from Ibrox, the Revenue and the insolvency industry suggest a compromise is possible.

There are a few important reasons for this.

One, HMRC does not really want to shut down Rangers if it can help it. The political blowback would be considerable and taxpayers could question the logic of the taxman's actions.

Two, there is no football creditor rule in Scotland for HMRC to take its usual principled stance against - millionaire players are not given special treatment in football insolvencies north of the border. 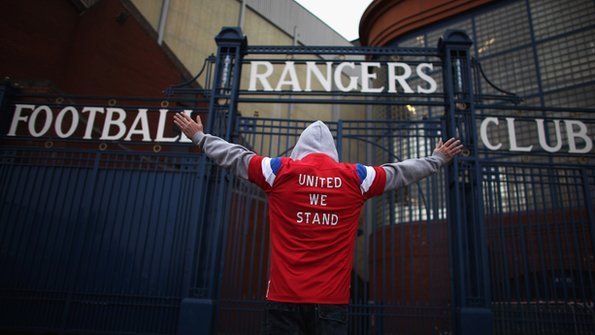 Fans feel deeply upset by the goings on at the club. Photo: Getty

And three, what HMRC really wants is a proper look at all the murky goings-on at Rangers going back a decade. To do this you need the investigatory powers of a liquidator, not the financial restructuring nous of an administrator.

In fact, the taxman needs both and that is exactly what he got at Portsmouth in 2010.

The Premier League's first insolvency ended with a 20p-in-the-pound deal for creditors, the transfer of assets and liabilities to a new company, and the liquidation and investigation of the old company. That process took nine months and the investigation has a long way to go.

A similar deal for Rangers would make Clark and Whitehouse's task of finding a new owner for the club exponentially easier. That owner, or owners, will need the wherewithal to settle the renegotiated debt and that is unlikely without Scottish Premier League football and a timely return to Europe.

A more aggressive liquidation would leave a "new Rangers" outside of Europe for three years and possibly outside Scotland's top flight too. Frankly, there would be no business case to speak of for many, many years.

There is, of course, one stumbling block to this pragmatic solution (I leave aside for now any comment on the sporting ethics of all this) and he is currently holed-up in a posh apartment block in Monaco.

In some ways Craig Whyte is irrelevant to what is happening.

OK, he is playing a convincing and useful role as the baddie in this pantomime. But it is not entirely his fault the club are broke and he certainly cannot be blamed for the Employee Benefit Trust ruse. This storm has been building for some time and it was going to erupt on somebody eventually.

Whyte, however, is relevant to what happens next. Quite simply there is no deal between club and Crown that leaves the erstwhile owner "quids in". He has to go and he cannot be seen to be doing nicely out of this.

But there is one useful service he can still provide and that is to be the template of the kind of person who should fail Scottish football's new "fit and proper person" test, just as soon as they get around to introducing one.