The precarious position of clubs in administration

Over the last few years, Brendan Guilfoyle has been called a hero and a liar, a saviour and a crook. Lauded in Luton, praised at Palace, the affable accountant is a pariah in Plymouth.

And it is this most recent experience - his stint as Plymouth Argyle's administrator - that has caused Guilfoyle to have a Jerry Maguire moment.

Fellow devotees of the film will recall the "mission statement" the sports agent tapped out during a crisis of conscience: his agency needed to be more honest and personal, which could only be achieved with fewer clients. His colleagues said they loved it to his face, while they engineered his exit behind his back.

This week, Guilfoyle published a blog titled "Football clubs - are they businesses worth saving?" The product of a Plymouth "post-mortem", it finishes with a set of promises for how football insolvencies should go in future. It is coherent, sensible and completely unworkable, a point Guilfoyle acknowledged with a wistful chuckle when I pointed it out.

That does not mean his warning should be ignored - far from it. Amid the wishful thinking is a stark message for British football: we won't have to wait long for the next A&E case and next time the patient might not make it.

And it isn't just Guilfoyle who thinks this.

Having read the Leeds-based insolvency practitioner's appraisal of the landscape for failing clubs, I asked two other well-known "IPs" what they thought about the coming year or two. It was grim stuff.

Gerald Krasner, of AFC Bournemouth and Leeds United fame/infamy, was even more pessimistic than Guilfoyle, while Andrew "Pompey" Andronikou admitted it was now almost impossible to walk away having pleased everybody. 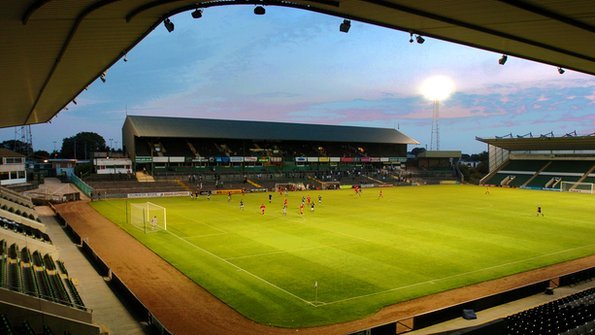 "The world has changed, the buyers just aren't there anymore," he said. "A lot of people want to own a club but they don't want to write a cheque.

"The market for British buyers has disappeared and that leaves only overseas bidders, which brings a different set of problems.

"Frankly, there is no economic argument for buying most of these clubs - it is political or emotional.

"I said a few years ago that 10 could disappear by 2020. I might have got that wrong but there are two or three on the brink right now and at least one would surprise you."

It was in March when Plymouth Argyle ran out of money and entered administration. Guilfoyle, fresh from successful rescues at Luton Town and Crystal Palace, was put in charge and the countdown to a fresh start began. That countdown finally finished at the end of October.

Mission accomplished: Guilfoyle had fulfilled his duties as an officer of the court, got the best possible deal for the creditors and avoided presiding over the death of a cherished community asset.

This, however, glosses over eight months that saw last rites administered at Home Park half-a-dozen times, staff go unpaid, the club's most valuable assets sold, a state-owned bank accept a huge loss and Argyle sink to the bottom of the Football League.

That period also saw serious damage to Guilfoyle's reputation as a clear-sighted operator in a murky world.

Why? The short answer is that, if Argyle was anything other than a football club, it would have been liquidated. Under these circumstances, any rescue is going to be fraught with compromises.

The slightly longer answer is that he backed the wrong horse, a fact he acknowledges in his blog.

Many fans told him at the time that selling the club to Truro City chairman Kevin Heaney was a bad idea and they were proved right.

The property developer's plans unravelled in catastrophic fashion but it is important to note he was the only one to emerge from the preliminary tyre-kicking phase with cash to keep the club afloat and pass the bank's time-waster test.

Guilfoyle misjudged his man, for once, but his choice was limited. The club's eventual saviour, local businessman James Brent, was still waiting in the wings as a buyer of last resort. So it was Heaney or nobody.

It's a dilemma Krasner knows well from his time at Bournemouth, where he once started a news conference by telling everybody he did not know what to say only to have a colleague wave a just-delivered cheque at him from the back of the room. Panic over, see you next month.

What upsets Guilfoyle, though, is how bad relations got with the fans. Having tried to keep supporters in the loop, his efforts to salvage the Heaney deal enraged large sections of the Home Park crowd, who used every means available to heap pressure on the administrator, his firm and the authorities.

Guilfoyle understands where this emotional response comes from - he told me more than once that he too is a football fan - but is dismayed at how poisonous the atmosphere became. It is for this reason he has written his own "The Things We Think and Do Not Say" memo.

In future, Guilfoyle says he will be more honest at the outset about the club's prospects of survival. He will also refuse to sign any confidentiality clauses and commit to keeping fans updated via websites created for the administration process.

But most importantly there will be a tight deadline of no more than a month for the rescue to happen and the money will have to arrive in full or the club will be shut down.

Just think about that for a moment and remember Krasner's warning of more administrations to come. Sobering, isn't it?

Andronikou, currently attempting to save Portsmouth for the second time in little over a year, said Guilfoyle's recipe for the future was a nice idea but impossible in practice.

"We would all like to go into these clubs, do a deal in a couple of weeks, get paid and get out but that will never happen," he said.

"Football clubs aren't factories. There are local and social implications and you have to bide your time. After all, if you do the deal too quickly you'll only be criticised for not marketing it properly.

"But there is no doubt there aren't as many of those 'mad people' football clubs have relied on, not in this country anyway. Sport is still a sexy investment but there is less money out there."

So, to paraphrase Maguire's mission statement, there is a cruel wind blowing through our business, it is time to think smaller, more personal and more manageable. Perhaps that goes for us fans too?

And as well as my blogs, you can follow me when I'm out and about at https://twitter.com/mattslaterbbc