Jeff Powell was on BBC Radio 5 live several days ago talking about David Haye's defeat by Wladimir Klitschko, a total embarrassment for British sport that pushed the veteran Daily Mail sports writer into full rant mode: Andy Murray, English football and Mark Cavendish, who had just finished fifth in the Tour de France's first bunch sprint. Losers, all of them.

Two days later, Cavendish won the race's fifth stage, delivering the perfect riposte to those who say he can't win without being delivered to the line by his team or when the finish isn't pancake flat.

But most of all he silenced the "ignoramuses" who wrote him off.

OK, I am being unfair. Powell is one of Britain's best boxing writers and his appraisal of Haye's hapless shift in Hamburg was knockout stuff. And neither can he really be blamed for stretching his argument about British inadequacy at the highest level to include the admirable but not-quite-good-enough Murray and England's self-evidently second-rate footballers.

But Powell's throwaway remark about Cavendish had me shaking my head at the radio.

When will they learn?

Cav's not the like the rest of them. He is an anomaly, a British sportsman who beats the best in the world, when it really matters, again and again and again.

Name another home-grown hero/heroine who has been so good for so long? Wayne Rooney? Nearly. Jess Ennis? Maybe next year. Alastair Cook? Let's see how he goes against India. Chrissie Wellington? OK but she is even further from the mainstream than Cavendish. 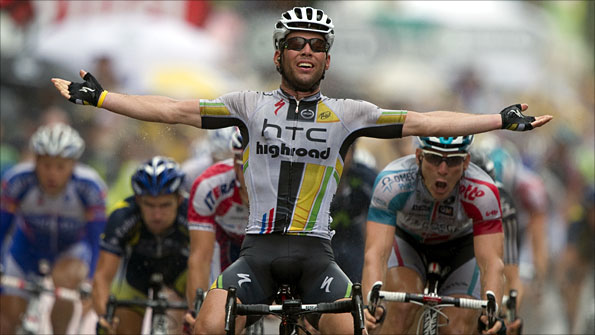 The Isle of Man-born phenomenon, now 26, has been blitzing sprints around the world almost from the moment he exploded onto the road racing scene in 2007.

Three more Tour de France stage wins have come in the last 10 days, taking his career haul to 19, good enough for joint seventh place on the all-time list, only three behind Lance Armstrong. There have also been notable victories in stellar races such as the Giro d'Italia, Milan-San Remo and Spain's Vuelta.

But it is not just the quality and quantity of his successes that set Cavendish apart from most British stars. It is how he succeeds that causes so much confusion.

Let's be honest, the majority of us still don't really get cycling - too many foreign locations, names and words for our Anglocentric tastes. How can Cavendish keep winning races and still be two hours behind the little Spanish chap in the yellow jersey? He's the winner, isn't he?

The short answer to that question - and it is one I frequently get in the BBC newsroom - is yes, Cavendish is not "winning" the Tour de France itself and he never will. Quite simply, he is the wrong shape to win a 2,000-mile, three-week slog that passes through two mountain ranges. No amount of training will ever change that.

But Le Tour is not like most sports events. There are different races, which appeal to different racers, within the main race. It is not a Test match, it is a series of T20 contests sprinkled throughout a Test and Cavendish is the master blaster who empties the bar every time he comes to the wicket.

His specialty, the bunch sprint, is supposed to be cycling's great lottery. A cavalry charge of colours and grimaces, there are few sights in sport that can match 100 riders or more arriving in a town centre at 45mph. Cavendish, however, has made the unpredictable predictable. After all, he can hit 48mph.

Over the last four years, he has won half of all the "flat" stages contested at the Tour de France, the one event in the calendar that every top rider turns up for in peak condition. And when you look only at the stages that actually finished in bunch sprints (i.e. you strip out the breakaway wins and stages affected by crashes), his success rate climbs to almost 90%. This is not supposed to happen.

Such is Cavendish's domination that his rare defeats become bigger news events than his victories. When former team-mate and verbal sparring partner Andre Greipel beat him to the line for the first time on Tuesday last week, Cav was the story. That he would avenge this loss on Wednesday, in emphatic fashion, was the least surprising sports result in France since New Zealand beat Portugal at the last Rugby World Cup.

This brings in another ingredient to the Cavendish mix: his ability to cope with expectation. The HTC-Highroad team has been put together to give him the best chance of success. But that brings with it extreme pressure. There are almost 80 team employees whose livelihoods depend on Cav's ability to deliver the media exposure the sponsors demand. It is his job to win - and he takes that responsibility seriously.

This partly explains why he sometimes comes across as an arrogant so-and-so. Put a microphone under his nose 30 seconds after he has won another sprint and what you get is a heart-pumping release of self-belief that can upset listeners of a more Corinthian persuasion.

But mixed up with all the bravado is usually a lot of respect for the race, gratitude for his team-mates and honesty about his performance. He knows he is good. To deny that would be to abdicate his responsibility to his team.

He is also - and this is becoming ever clearer - a bright spark with a great sense of humour. I will be surprised if there is a funnier post-race interview this year than the one in which he answered claims he was helped up a Giro d'Italia mountain stage by the team car. Cavendish invited his critics to join him at the back of the field with the marching band and ice cream van to see for themselves.

And yet despite the wins, occasional whines and frequent wind-ups, he remains a down-to-earth bloke from Douglas. As polite and softly-spoken off the bike as he is bold and brassy on it.

We probably won't hear much from the Manx mouth for a few days now but there will be a further chance for Cavendish to empty the bars: the final dash up the Champs-Elysees.

I think he will win that. He should also earn the green jersey, given to the Tour's most consistent finisher, a title he has held within British sport for the last four years.

Will this finally bring him the credit he deserves back in Blighty? Probably not but hopefully he won't be mentioned in despatches the next time another British hope conforms to type and comes up just short on the big stage.