Football fodder in the scrap for Stratford

Anybody bored with the Spurs v West Ham squabble for the Olympic Stadium? I wouldn't blame you if you were.

In the last few weeks I have learned more about the angle of seating at obscure European football grounds than anybody who doesn't actually build football grounds should ever be subjected to. And I won't be that fussed if I don't get to discuss planning permission with local government officials again.

But this decision is important to a lot of people, including two groups who we have not heard much from amid the posturing of the Premier League pair, supporters of Crystal Palace and Leyton Orient.

Give the stadium to Spurs and you put the mockers on Palace's return to their historic home in Crystal Palace Park; give it to Spurs or West Ham and you probably force Orient to contemplate a beggar-thy-neighbour move of their own. Some choice.

This is not the blog to lay out the respective rights and wrongs of Tottenham's and West Ham's claims on the £500m showpiece but it boils down to a choice of the least bad option: knock down a publicly-funded building after a month's use and trash our reputation in global sport, or give a publicly-funded building to a private company and pray it doesn't give it back to us.

But there will also be collateral damage and the Eagles and the O's could bear the brunt of it.

Orient, the second oldest league club in London, have been playing at a ground almost nobody calls the Matchroom Stadium on Brisbane Road since 1937. Prior to that their home was in Clapton - it's a housing estate now and the only indication it was once something else is a street called Orient Way and a scruffy plaque. That could be Brisbane Road's fate in the not-too-distant future. 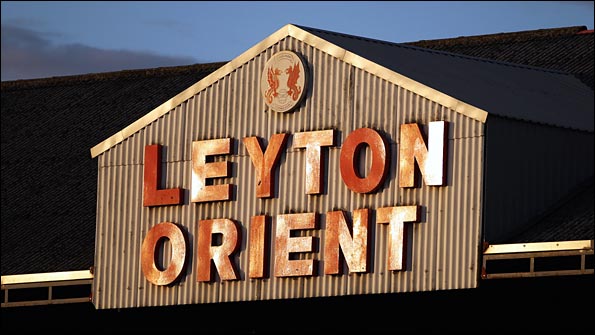 Many of Orient's fans may have moved away from the area but Brisbane Road still feels like home Photo: Getty

Despite award-winning efforts in the community and imaginative pricing policies, particularly for youngsters, Orient are a club with a common problem: the fan-base, never huge, has moved away.

The typical O's fan lives in Essex these days, with a Chelmsford postcode, but the club remains an East End institution at heart.

That connection with the club's home is hugely important for the fans but would be tested if Orient had to compete even more desperately for bums on seats with Spurs or West Ham just two miles away.

Of those two evils, O's owner Barry Hearn, the pub sports impresario, prefers Spurs, as their traditional north London support does not clamber all over Orient's in quite the same way as West Ham's.

There is also the terrifying prospect - for Hearn, anyway - of West Ham dishing out thousands of cheap tickets to local youngsters and floating fans in order to fill their new 60,000-seat stadium. That is less likely with Spurs, who are confident that if they build it, fans will come.

Either way, though, the future looks squeezed, which could be Hearn's cue to revive an idea that has been swirling around his head for a while. A couple of years ago meetings were held about a move to Harlow, and rumours of decamping to Fairlop, a greenish spot on London's north-east edge, have also circulated.

Conspiracy theorists may disagree but I think Hearn would prefer to stay put if he can (and he has floated the idea of making London 2012's temporary hockey venue a more permanent home for his side). In the meantime, he has asked the Premier League and Football League how a Spurs or West Ham move to Stratford can possibly pass the "ground criteria" in their rulebooks.

The relevant section in both codes is almost identical - a move can only be sanctioned if it does "not adversely affect other clubs in the immediate vicinity". I asked the Premier League for a comment last week and they said they would ask their lawyers. I am still waiting.

Brought in to prevent clubs from "doing a Wimbledon", this rule is untested in recent years. The Dons' move to Milton Keynes is still one of the most controversial episodes in modern British football history and nobody has attempted anything similar since. Hearn, ironically, was one of only a handful of Football League chairmen to vote against it.

But Orient's headaches are only half of this story. Palace are the other bystander in this Olympic smash-and-grab.

Chronic financial problems forced the Championship club into administration last year, costing them a healthy position in the table and a decent team. The end result was a narrow escape from relegation and a near-miss in bankruptcy court.

But from that dismal low the prospect of a brighter future emerged when a small group of wealthy fans got together to buy the club and Selhurst Park, the Eagles' large but shabby home. 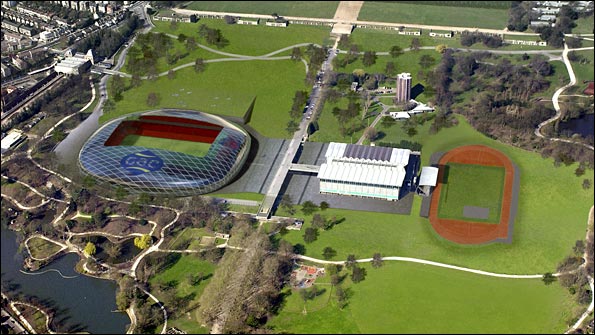 Palace's plans for the site include a 40,000-seat stadium and new aquatics centre Photo: Crystal Palace

This was significant because the separation of club and ground had been a major factor in Palace's ruin. Now, at last, the club's owners could do something to boost revenues by either upgrading Selhurst Park or selling it to start again somewhere else. And where better than where it all started, Crystal Palace Park, the club's first home, just a mile away?

Over the years, the park has hosted Victorian spectaculars, motor racing and 20 early FA Cup finals, but now it is perhaps best known for the National Sports Centre, a dilapidated athletics stadium and swimming pool which sit in the middle of the park's green acres.

Who owns what in the park is impossibly complicated, which is one of the reasons the whole place has seen better days. But new Eagles chairman Steve Parish, a highly successful businessman, has a plan.

UK Athletics will not need an unloved venue in south London once the Olympic Stadium is available so why not replace it with a new football stadium? Throw in a promise to build a new aquatics centre and athletics facility and you have a vibrant community asset.

There is a snag with this plan, though: Spurs. The legacy wrapping to their Stratford switch is a promise to renovate the National Sports Centre, a gesture already dismissed by the athletics lobby as woefully inadequate.

Palace asked Spurs if they could work on a multi-use venue plan that would suit both sports but they were rebuffed. And in a remarkable display of arrogance, they were also asked by the White Hart Lane club if they could keep their interest in the site to themselves until after the Olympic Park decision.

Parish, no pushover, does not seem to be overly miffed and remains confident his plan will win the day. But until Stratford is settled, which could be some time if there are judicial reviews of next month's final decision, the Palace return is in limbo. And it is hard to see how Parish can proceed if Spurs get the Olympic Stadium and athletics has to make do with a revamped National Sports Centre.

So far the debate about what happens in Stratford after the five-rings circus leaves town has almost exclusively focused on Spurs v West Ham. That is hardly surprising, given what is at stake, but it would be unforgivable if no consideration at all was given to the concerns of two less fashionable but equally valuable London institutions. There should be some post-2012 legacy for the Eagles and O's too.