Flaky economy, massive public sector cuts and a chastening World Cup experience for the world's "best" domestic football league... it is hardly an optimum sales environment for the Premier League's box-office staff, is it?

And yet, broadly speaking, they have pulled it out of the bag again.

Having spent the last two days on the phone, I can exclusively reveal the English still like football and are willing to pay good money to go and watch it every other week. As discretionary spends go, a Premier League season ticket appears up there with a decent cup of coffee, bar of chocolate or lottery scratch card as the last luxury to give up.

OK, the situation isn't rosy everywhere - there are some winners and a few losers - but the general picture is sales have held up, as clubs have frozen prices and offered juicy discounts to "early birds", online customers and the young and old.

But first, the winners.

Take a bow Arsenal, Blackpool, Chelsea, Manchester City and Spurs, the only Premier League clubs to have actually put up the "sold out" signs for season tickets. 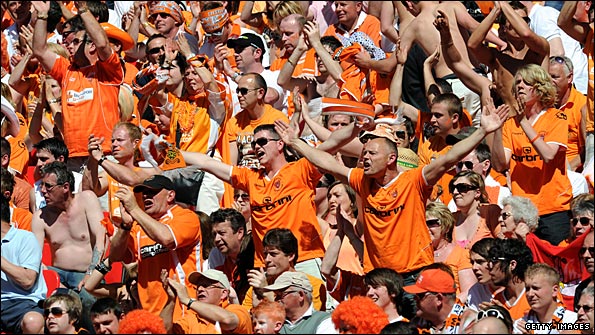 The London trio continue to pack them in despite charging the highest prices in the country (the cheapest adult season ticket at the Emirates is £886, £695 at the Bridge and £680 at White Hart Lane).

All three also claim to have long waiting lists, so it seems there are more than enough wealthy people left in the capital to go around. But a word of caution. Waiting lists are not what they used to be, as Manchester United can confirm, but I will return to that later.

Blackpool's massive sales surge should come as no surprise. A first season in the top flight since 1971, 5,000 extra seats at Bloomfield Road and half a dozen new players to cheer on, there are plenty of reasons for the 'Pool's big win. But credit where credit is due, their 12,000 tickets sold is an annual rise of 140%.

Manchester City's sales bonanza is testament to the growing expectations up at 'Middle Eastlands'. Successive summers of serious spending in the transfer market have helped shift an extra 3,000 tickets. Nice work. But remember what they say about despair and hope, it is the latter that kills you.

City's numbers, of course, cannot be viewed without comparison to those of their cross-city rivals United. The most tempting narrative is one of Blues up, Reds down. Sadly, Premier League life is not that simple.

An entire prospectus could be written on the summer saga surrounding ticket sales at Old Trafford but the twitter version would be "they're down but not by much and it's all relative really".

That's no fun, though, so let's delve a little deeper into what has been happening at the Manchester branch of the Glazer business empire.

First, season tickets are still available at Old Trafford. I know this because I have just tried to buy some. Having downloaded a "season ticket invitation" brochure from the website, I called the ticket office and was immediately put through to a helpful sales assistant (not the case at every club, I can assure you).

Within minutes, we had discussed options on three sides of the ground, all in the second tier, for between £684 and £779. And that was "two together".

Hold on a minute, what happened to United's famous waiting list (said to number 24,000 at the end of last season)? Well, it has evaporated. And this is despite the first price freeze since the Glazers arrived in 2005 and what many supporters have described as the biggest sales push in memory.

To be fair to the club, though, this is not the first time season tickets have been placed on general sale. United also deny this year's marketing effort has been any bigger than previous years. And it must be remembered that the club has sold more season tickets than the capacity of 17 Premier League grounds.

That said, demand for tickets has undoubtedly fallen away at Old Trafford, which should make the next quarterly conference call for the club's bondholders slightly more interesting than usual and give the anti-Glazer movement something to ponder. 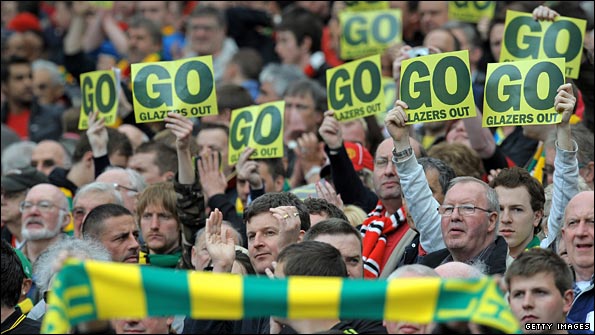 The Glazer family have come under fire from some Manchester United fans. Photo: Getty

Another set of disaffected supporters with plenty to chew on is at Liverpool. The official line is "only a low percentage" of the club's season ticket-holders have not renewed but anecdotal evidence suggests there was a significant hole as of a month ago.

This can change quickly and nothing matches the boost of a new manager and players for drumming up sales. What might continue to hurt sales at Anfield, though, is the ongoing dissatisfaction with the club's owners, if for no other reason than they have just hiked prices by 7% for season tickets and 10% for single games.

Everton's figures are a little disappointing, too, but I am loath to criticise them too much as they were by far the most forthcoming with their numbers. So full marks for transparency and good luck with selling those 1,000 seats needed to reach last year's total of 26,000.

In fact, this idea of a late push to get up to last year's number is pretty typical. Blackburn, Bolton, Sunderland, West Ham and Wolves all declared themselves to be "comfortable", "about where we were" or "very close to being on par", while the two other promoted teams, Newcastle and West Brom, have both enjoyed the bump their elevated status should bring.

Numbers for Aston Villa, Fulham and Wigan have been harder to verify but the anecdotal evidence suggests it is a case of as you were at Villa Park (recent reports of a 40% slump were flatly denied), slightly up at Craven Cottage and approaching average at the DW.

Stoke City deserve a mention, too. They are "very close" to joining the ranks of the "sold out". Having passed 20,000 for the first time last season, they are a tad under 21,000.

So there you have it. Despite concerns over jobs and mortgages, a lack of really eye-catching new talent in the league and the colossal downer that was the World Cup, the Premier League is still a pretty easy sell.

That is not to say everything is hunky-dory, though. Overall attendances have declined for the last two seasons (occupancy, however, has remained solid at 92.4%) and the Bundesliga, with its safe terraces, cheap tickets and customer-friendly approach to mid-game refreshments, is now the best-attended football league in the world. It is also the most profitable.

The Premier League should also be concerned about its ageing demographics. According to the Football Supporters' Federation, only one in 10 fans at any given game is under the age of 24. Two decades of rising prices have transformed the profile of the average Premier League supporter.

So the short-term outlook remains relatively positive but there could be trouble in store the next time an economic downturn asks football fans if they can really afford their season tickets.