Can English football ever adapt?

I heard a funny story about how English football works (muddles through, more like) the other day.

Back in 2003 the FA was getting Fabio Capello-sized stick from all quarters about its disciplinary procedures.

Some clubs were angry about how long it took for punishments to be dished out, others were annoyed when rivals played the system to ensure their stars would be eligible for big games, the international authorities wanted automatic suspensions, the players demanded a right of appeal and the men from the counties viewed any talk of change as another assault on their place at the heart of the national game. Only the lawyers were happy, being paid silly sums for straightforward work.

Slow, easy to circumnavigate, amateurish and bad value for money - sounds like England's defensive display against Germany, doesn't it?

But I don't tell this story for the easy gag, I tell it because it illustrates why changing anything in English football is so hard, frustrating and ultimately underwhelming. Too many competing agendas, too many self-interested voices.

So forgive me if I don't get too excited about the result of the soul-searching that has just commenced. We are past masters at the impressive-looking policy document, po-faced press conference and never-again declaration of intent, it is mastering passes we struggle with.

Howard Wilkinson was on BBC Radio 5 Live on Monday. It was a great interview - passionate but informed, dismayed but measured.

He explained how he had written a report for the FA which said English football needed to devote more resources to youth development, spend more time on technical skills, build a national football centre and prepare for a future when 4-4-2 will be obsolete. 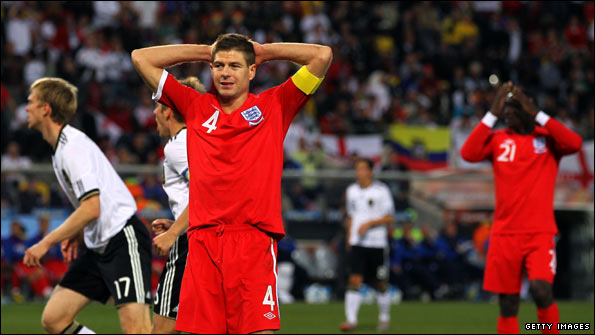 Wilkinson wrote that report, the Charter for Quality, in 1997. English football still does not have enough coaches, still places too much importance on results at youth level, still lacks a national football centre and still defaults to 4-4-2 under pressure.

Seven years later, after England's defeat at Euro 2004, the FA held another internal review. Questions were asked about the access an England manager has to his players, the importance of friendly matches and the danger of playing too much club football. No change there, then.

In 2005, following more turmoil at the governing body, we had another review, this time looking at the FA's structure. Lord Burns flagged up the conflicts of interest, a lack of representation for key groups and the excessive influence of the Premier League. Among his remedies were the creation of a "parliament of football" and three independent members on the FA board. We are still waiting.

In 2007, it was time to look at English football's youth development system, again. Rugby league boss Richard Lewis was called in and he suggested a number of tweaks to the academy network born from Wilkinson's charter. The most important of those, genuine FA involvement in the clubs' youth set-ups, was fudged.

A year later England would fail to qualify for Euro 2008 and "root and branch" reforms were the promised response. But what we got was the public humiliation of an over-promoted coach, his replacement by the most expensive manager money could buy and...erm, that's it.

Fabio Capello, a man who the FA had looked at when it seemed Sven-Goran Eriksson was off to Chelsea but ruled out because of his lack of international experience and inability to speak English, was now the answer. The only answer.

That's the English response: big talk about far-reaching reforms and thinking the unthinkable, before bottling it and going for the quick fix. Over in Germany, however, they do things a bit differently...they actually do things.

Having suffered the "humiliation" of losing to Croatia in the quarter-finals of World Cup 1998 and failing to get out of the group stages of Euro 2000 (compounded by a 1-0 defeat to a mediocre England), the bosses at the German FA sat down with their counterparts at the Bundesliga and came up with a plan: a 500m-euro investment in youth.

As a result, Germany has almost 13 times as many qualified coaches as England, more home-grown talent playing in its top league (Europe's most profitable) and a crop of young players who have now beaten England 4-0 in the 2009 European U-21 Final and 4-1 at the 2010 World Cup.

Does anybody think the response to England's latest crisis will be as bold, coherent and effective?

Thanks to a rare moment of common sense and leadership, the FA actually sorted out the disciplinary procedure problem in 2003.

The clubs got quicker/more consistent rulings, the players kept their right to appeal, Fifa/Uefa were placated by the reduced timeframe and the amateurs lost their say on professional cases but got back the blazers that an earlier FA regime had taken away - £25,000 being a small price to pay for keeping the peace.

If only assembling an England squad capable of winning a tournament was so easy. Delivering one of those in time for the 2018 World Cup will cost more like £250m and the clock is ticking.