What we can learn from Rooney, Dan Rooney

Perhaps the worst row I've had in my scribbling career came when a press officer at a Premier League club accused me of racism.

We had written a story about whatever issue everybody was talking about that week and buried the launch of an anti-racism rap that had been recorded by a couple of the team's players. To give that story secondary importance was racist, the PR man claimed. I disagreed and tempers flared.

But nobody likes being called a racist. Even racists prefer to be called something else, something less nasty, less ugly. That is why I'm not going to accuse English football of racism - it would be as unreasonable as that press officer's rant.

So I'm just going to note two numbers: 23 and three. The first is the percentage of footballers in the top four divisions who are black, and the second is the number of black managers working at that level. That's three out of 92, basically 3%. Does that sound right to you? Cards on table time: it does not sound right to me.

It doesn't sound right to many in the black community either, as I discovered at an event at Wembley last month. The 2009 Black List Awards brought together a wide range of people from the football world to recognise African-Caribbean achievement on and off the field.

Videos were played, speeches were given and prizes dished out, the message was clear: English football is a more diverse and multi-cultural place than it once was and is all the better for it.

But there was also an almost tangible feeling that the situation is by no means perfect. The breakthrough African-Caribbean talent has made on the pitch has not been replicated in the dug-out. Why is that?

To be honest, I don't know. I suspect it is a combination of factors, with numerous caveats and lots of exceptions.

I'm also optimistic things are changing for the better, albeit slowly, and in years to come, when the percentages of black footballers and black managers are pretty comparable, articles like this will seem very old-fashioned.

But we're not there yet, are we?

The number of black players in the English game has been rising steadily for 30 years to the extent they now make up almost a quarter of all professional footballers, the group from which almost 100% of managers are recruited (give or take a Jose Mourinho).

All things being equal, the number of black managers should follow a similar upward path, no? Well, yes... and no.

Since Viv Anderson was given his chance by Barnsley in 1993, there have been 30 appointments of black managers in the top four divisions. These have involved 17 different managers.

Three of those 17 are working now: Keith Alexander at Macclesfield, Chris Hughton at Newcastle and Paul Ince at MK Dons. This is an increase on two in each of the last two seasons but a decrease on the six black managers who were in work at any one time between 2001 and 2003.

One, six, two, three... it's hardly an irresistible march towards the Promised Land, is it? Even allowing for the lag between footballers hanging up their boots and moving into management, there is a big discrepancy between the number of potential black managers and the number of actual black managers.

It is a similar story further down the coaching ladder. Statistics from 2007 revealed that less than 1% of senior coaching staff are black. This is despite an increasing number of black players taking coaching badges - the latest figures from the University of Warwick show that 12.5% of players with a "Uefa B" qualification are black.

Theories to explain what is happening - or failing to happen - can be divided into two camps: a lack of opportunity or a lack of role models.

The first is straightforward. Black candidates, for whatever reason, are being overlooked for managerial/coaching positions. Push people to suggest a reason and you will hear anything from old school prejudice to an old boys' network. 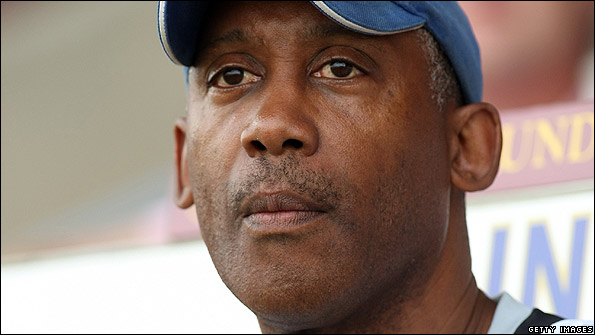 The second is more complex because it works on different levels.

Without role models to look up to fewer black footballers than white footballers consider management. This reinforces expectations, often sub-conscious, of what black and white ex-players will do next.

As a result, black footballers choose other careers. This has a vicious cycle-like logic as it reduces the chance of creating role models for future generations, particularly if those other options - the media, for example - look much rosier.

There is another element to the role-model argument to consider. The fact there are so few black managers means they are subject to a higher degree of scrutiny than their white counterparts.

Ince was not sacked by Blackburn after just 17 games because he was black, no, that would be ridiculous. But the pressure/expectation placed on him, as the first English black manager in the top flight, contributed to his downfall.

But I don't want this to be about individuals, because I know for every Ince I suggest somebody will shoot back with a John Barnes and this is about more than a few big names, just as the hundreds of average black players currently plying their trade have little in common with Batson, Cunningham and Regis.

In the video towards the top of this piece you will see I have posed the question "does English football need a Rooney rule?" This does not, as others have already pointed out, have anything to do with Wayne. This Rooney is Dan, the veteran owner of the Pittsburgh Steelers who in 2003 introduced a remarkably successful piece of legislation into the National Football League rulebook.

It is successful because it does not force the issue. The rule simply says an ethnic minority candidate must be interviewed for every head coach job that comes up. The number of African-Americans in those positions has increased from two to six (having been seven last season), and black head coaches have led two of the last three Super Bowl champions.

For what it's worth, I don't think English football needs to go down this route (with African-Americans making up 13% of the total US population and 65% of the NFL's players, their lack of representation in senior coaching positions was a more glaring inequality than English football's player/manager discrepancy) but we would do well to heed a few lessons.

The first is that access to opportunity is key. By giving minority candidates a shot at a job you give them exposure, hope and practice. If they don't get the first job, they will be better equipped to get the next one.

The second is that legislation like this depends on consent. President Eisenhower was a reluctant social reformer in the US because he did not believe you can "change the hearts of men with laws or decisions". He was probably right but Rooney had little trouble persuading his fellow NFL team owners of the necessity for change. They already knew the numbers didn't look right.

And the third is that once you break through a glass ceiling, people quickly forget it was ever there in the first place.

I have already said I am both troubled by the low number of black managers currently working in football and optimistic this situation will improve. I think I will leave it that and give the last word to England women's team manager Hope Powell.

"I don't know if it's about a lack of opportunities or role models, it's probably both. But as more black players come through, I'm sure things will change. Mainly because I expect people will start to wonder if we're missing a bit of a trick here."