Until recently I thought a similar goose/gander connection existed between the Premier League and England's bid to stage the 2018 World Cup. A symbiotic win-win if ever there was one.

O to live in such simple times! These days, GM is more likely to bankrupt America than sustain it and the Premier League's commitment to the Football Association-led World Cup campaign is looking increasingly half-hearted.

That is a crying shame because England has everything it takes to stage a superb tournament, as will be demonstrated when the 15 cities hoping to host World Cup football in 2018 come to Wembley on Thursday to deliver their applications.

I had hoped to write only about that this week but to not mention Tuesday's shenanigans at bid HQ would be to ignore that big grey thing, with clumpy feet and a ridiculous schnozzle, lurking in the corner of the room.

I refuse to spend too long on the squabbles of English football's numerous chiefs, though, and not just because I wrote about them last week. The main reason is that they are depressingly trivial: x doesn't like y, y doesn't like z, nobody likes z, but nobody can really remember why.

In case you have no idea what I am on about, Sir Dave Richards, the chairman of the Premier League (among other titles), has chosen this week, the week the 2018 bid team hoped to talk about how many excellent potential venues this country has and the enormous passion for football we share, to resign from the bid's main board.

This week as opposed to two weeks ago, when that board was restructured to streamline the decision-making process, bring in the key powerbrokers and show a united front to the rest of the world, particularly the 24 members of Fifa's executive committee who will vote on which country gets the World Cup next December.

Richards must have missed that memo. Why else would such a loyal servant of English football destabilise an already wobbly situation a fortnight away from the bid's "first interview", the draw for the 2010 World Cup in Cape Town?

Let's hope the bid team insider I spoke to earlier this week is right when he asked me if I had met Richards. "No? Well, him leaving actually makes our job a lot easier," he said.

He's probably right. But then Karren Brady, one of board members who did step down at the correct time, is also probably right when she admitted the bid was beginning to look like a "shambles".

Ho hum, perhaps we did not like being frontrunners. Coming hard on the rails worked for London 2012, after all. Might be an idea to stop yanking on the reins now, though, hey?

So with that in mind, let's turn our attention to the pitches and places we hope will persuade Fifa's sphinx-like electorate to bring football back home.

As previously mentioned, 14 cities and Milton Keynes are throwing their hats into the ring, and those 15 places represent 22 different venues, although Liverpool's inclusion of Anfield alongside its replacement and Everton's Kirkby conundrum is really just to add something concrete to an otherwise computer-generated proposition.

Not that there's anything wrong with pictures. Munich's Allianz Arena was still an architect's dream when Germany won the right to stage the 2006 World Cup. It did not even open until the summer of 2005. A year later it would be hosting a World Cup semi-final.

Much the same can be said of South Africa's 10 locations, the majority of the 20 venues used during the 2002 World Cup and most of Italia 90's too.

Not having your World Cup venues built now can almost be an advantage (well, that's what Bristol, Liverpool, Nottingham and Plymouth are banking on). The drawings always look better than the finished article and you can trade on Fifa's desire to "leave something behind". It's not just the Olympic movement that bangs on about "legacy" nowadays.

There is, of course, a flipside to legacy, and it brings us back to that over-sized grey thing I failed to ignore earlier, but this time in white. Being able to say you have "left behind" a selection of state-of-the-art stadia and broken new territory for top-flight football is one thing, being accused of saddling mediocre clubs with grounds they cannot afford is another.

This was certainly my first thought when I considered the chances of Bristol, Milton Keynes and Plymouth, none of which struck me as hotbeds with pent-up demand for 45,000-seat sporting cathedrals. But then I spoke to them.

Bristol's bid is based on City's move to a new ground at Ashton Vale. A former council tip, it is now home to a herd of cows but should, in three years' time, be a football stadium with a capacity of 30,000 that can be taken to 44,000 in two 7,000-seat stages, should Premier League football arrive or otherwise.

There is similar ambition at Plymouth Argyle. The club's new owners are confident the team can progress to the Promised Land at last but Home Park's transformation into the "Wembley of the South West" will be financed by more than just football.

The region's natural beauty also features highly in the Plymouth plan. They are even promising to land 747s direct from Japan on the airstrips at Exeter and Newquay, if that is what it takes. I'm not sure about that but I think both Bristol and Plymouth have an excellent chance of making the cut when the final decision is announced on 16 December.

I would like to say the same about MK but I fear its quirky charms will be squeezed by Birmingham and London, particularly as the latter is putting forward four venues: the Emirates, Tottenham's new ground, Wembley and, slightly controversially, the 2012 stadium, running track and all.

I think four is greedy, no matter what London's bid leaders tell me about the city being of unique significance to a World Cup bid - the Emirates and Wembley, with the former getting a semi-final, seem nailed on, though.

Tougher choices exist elsewhere, particularly in the East Midlands, where some fear it might not be one from three but none. This seems unlikely but I have no idea if England's bid leaders will back the solid but unglamorous locations offered by Derby and Leicester or go with Nottingham's artist's impression of Forest's new home. It does look lovely but I would worry about its ever-changing location. 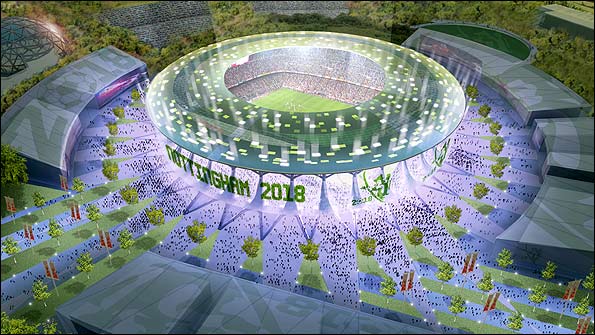 Artist's impression of the new stadium being planned by Nottingham Forest

Another battleground is Yorkshire. You would normally assume Leeds is a dead cert but then you remember the last time you went to Elland Road, try to work out who will actually pay for its upgrade (to achieve Fifa's 40,000-seat minimum you actually need about 44,000 seats because you lose that many to hospitality and the media) and wonder if you are not better off at Bramall Lane, with its history, new hotel and planning permission. Hull has a chance, too. Perhaps it will be two from three.

There were concerns in the North East that Newcastle-Gateshead and Sunderland were chasing just one place. I think both of these famous football centres, with their large, iconic grounds, will be fine.

So will Liverpool, despite current headaches, and Manchester, possibly for both Old Trafford - a certain semi-final venue - and the City of Manchester Stadium. Much has been made of Fifa's "rules" about only one city getting more than one venue in any bid. I do not think those rules are as firm as some believe. There is plenty of flexibility in them and we could end up with 18 venues in 14 cities or 12 in 11.

What is certain, however, is that a successful England bid in 2018 would be a success for the entire country. Take those recent PriceWaterhouseCoopers predictions of a £3.2bn bonanza for the country with a small pinch of salt but there will be significant rewards in terms of inward investment, tourism and global prestige.

Plymouth did its own research and thought the return on investment - £15m is the figure most of the cities will have to shell out - could be as much as £300m. Which is why so many cities have decided wading through forests of Fifa documentation - one bid leader told me he had spent the day finding a company director to initial each page of six 60-page contracts for just one of four practice pitches he must provide - is worth the trouble.

There are risks, of course, and Portsmouth's decision to pull out at the 11th hour demonstrates just how costly this process can be at a time of squeezed budgets (although there were some other factors at play there as well) but the earning capacity of the Premier League means the vast majority of infrastructure spending is taken care of - there will be no £9.3bn budget for this month of sport.

So let's stop bickering and start remembering why the England 2018 bid was the bookies' favourite from day one. It's the best bid, plain and simple.