Football's trusts must keep the faith

"You must never run a football club based on what somebody might shout at you from the stands."

Given the nonsense I sometimes spout about the "size" of my club (and therefore what division we should be playing in) this advice was possibly the most important message to come out of last week's slightly subdued Supporters Direct Annual Conference.

I say subdued because delegates from the 150+ supporters' trusts active in the UK assembled in Birmingham eager to trumpet how far the fan-ownership movement in football (and more recently rugby league) has come but mindful that the last year has witnessed a few bum notes.

If you'll allow me to run with the jazz metaphor a little longer, in the Kind of Blue corner you have the phoenix clubs of AFC Wimbledon and FC United, the renaissance of Exeter City and the shining example set by Barcelona; joining anything by Kenny G on the naughty step you've got the sheepish surrender at Notts County, the cash crunch at Stockport County and British football's continuing refusal to live within its means.

Dave Boyle, SD's chief executive, encapsulated this mixed report card when he opened the conference with the geographically sound but comically iffy observation that the movement was at a "crossroads". But why?

Why did 93% of the Notts County Supporters' Trust vote to hand over its controlling share of the club to a shadowy group of investors who still haven't answered even the most basic questions about who they are (not publicly anyway)? 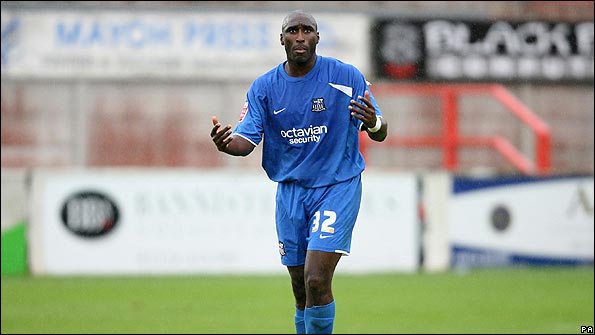 Why was the supporter-controlled board at Stockport just as incapable of safeguarding the medium-term health of the club as the various speculators, asset-strippers and out-and-out crooks that have wrecked other football teams?

And why are Exeter City the only fans-run club left in the Football League?

I'll tell you why: it's because football fans are stupid. OK, not stupid, but irrational.

Not that I blame them. As I've already mentioned, I'm just as susceptible to the "if Burnley can reach the Premier League so can we" daydream and only rarely remember the nightmares endured by Barnsley, Bradford, Charlton, Derby etc etc.

My club - like many of yours, I imagine - is eternally short of the decent full-back, wide player and a bit more cover on the bench that will propel us towards the Promised Land. Who cares if we can't afford the transfer fees/wages for these missing pieces, let alone the pieces we've already got. Where's your ambition?!?!

And it's not just football fans; everybody is at it.

"I think we just have to recognise that both firms and consumers don't always make the best decisions. They don't always act in their best interest or indeed in the best collective interest of society."

Substitute the words "firms" and "consumers" for "clubs" and "fans" and Hector Sants, the chief executive of the Financial Services Authority, could have been talking about football this week, not self-cert mortgages and pre-approved loans.

We all want too much, too soon. Given the choice between live-the-dream excitement or long-term sustainability, well, it's just not much of a choice, really.

And that is why the Notts County Supporters' Trust gave up the thankless and possibly impossible task of balancing a League Two club's books (whilst persuading the wider fan base that promotion is still part of the plan) and accepted the very tempting but slightly suspicious offer of life-changing investment.

One former trust representative on the Notts County board turned up in Brum to face the music for selling out (not that any money actually changed hands) but he was given a sympathetic hearing, and not just because he was one of the 55 who said "no" to Munto - "there but for the grace of God go I" appeared to be the consensus view.

It was a similar story when a former director at Stockport put his head above the parapet to admit they had not been strong enough, they had not learned how to say no to the manager and they had failed to communicate their more organic growth plan to the club's support.

Again, this list of mea culpas was greeted with resigned nods by most in the room.

For every dogmatic suggestion that the trusts at Meadow Lane and Edgeley Park should have accepted what happened on the pitch with the good humour of somebody without financial worries, an experienced old head would smile and say, "Nice idea, have you tried it?"

Delegates from Brentford, Chesterfield and Rochdale all spoke passionately about their battles with debt, former owners and demands for signings from the terraces.

Even the pair from Exeter City, the movement's star pupil, admitted competing in League One was a daily grind against the odds and the club's revival would have been impossible without the support of the council, a city-centre ground, lots of volunteers and a good break in the FA Cup.

What struck me about all these stories is that the fan-ownership model has become a victim of its own success. Time and time again, trusts have come to the rescue of badly run private enterprises. This has raised expectations without changing the fundamentals.

When the government set up Supporters Direct in 1999 the aim was to get fans' representatives on the boards of clubs. That way the common supporter would be given a say in how his or her club would be run. But the extraordinary responses from ordinary fans at clubs as diverse as Bournemouth and Manchester United made it seem more was possible, much more quickly.

I think the last year, however, has reminded everybody just how hard the journey to Barcelona-style accountability, democracy and, most of all, success, will be. Refocusing on the original target - and harnessing the lessons learned over the last decade - would help SD and football. Little acorns and all that.

Let's be honest, Barca is the city upon a hill. It didn't just acquire 170,000 members, 1,500 supporters' clubs and 200m fans worldwide because a group of fans got together to buy the club. No, the Catalonian giants are "mes que un club" for fairly unique historical reasons.

I would love to see an English Barca emerge - and I wish the trusts at Manchester United and Newcastle and the Liverpool fans' groups ShareLiverpoolFC and Spirit of Shankly all the best - but the finances of our biggest teams are now so complicated, so massive, a fans' buy-out is almost impossible to imagine. When Liverpool host United on Sunday their joint debt will be over £1bn - that's a lot of pledges on a website.

The only scenario that is going to bring about a Premier League Barca anytime soon is for a club to fail. And I mean really fail. Not just the company that owns it. A Lehman Brothers, a sacrificial lamb. That would wake up fans, the media and the governing bodies to the perils of short-termism, unregulated speculation and warped competition. Any volunteers?

In the meantime, the supporters' trust movement should just comfort itself with the knowledge that it is very probably right about most things, it's just that most people aren't ready to listen yet.

ps I haven't named my club on purpose, mainly because I don't think it really matters (the issues are universal). But I'm happy to provide details below. I'll give you a clue: we're either on the verge of administration because we owe the taxman £300K, or all is well and we'll be in our new stadium asap - depends who you believe.