Plenty still to ponder at Portsmouth

A decade or so ago I spent a year writing about cars for a motoring website. I enjoyed it for a bit - a new car to drive most weekends and foreign trips to warm countries with photogenic roads are reasonable perks - but realised it wasn't for me when I had to update my own reviews of cars that were only "new" in the sense that they had a different stereo and metallic paint was now standard.

This came back to me on Monday when I found myself reporting on a second takeover at Portsmouth Football Club in two months - they've had as many owners as they have points this season - and like the car reviews there are plenty of similarities between the two.

It is still a case of hard chimes for Pompey on and off the pitch. The new owner is a Middle Eastern businessman of whom we know little; the previous owner, Sacha Gaydamak, still has a say on matters; and the only person providing real commentary is the long-standing/suffering chief executive Peter Storrie.

Thankfully, for Pompey fans, there are also differences between the two deals. Let's explore those before returning to the far bigger pile of unanswered questions:

Second, Storrie, the guardian of Fratton Park's secrets for the last seven-and-a-half years, seems much happier about the prospect of working for Al Faraj than he ever was about working for Al Fahim.

And third, erm...have I mentioned the metallic paint?

I would love to be able to tell Portsmouth's supporters that Al Faraj is definitely, as Storrie has described him, the "real deal" and a man capable of taking them "to another level", but we've heard similar stuff before and the Championship is another level.

If we just stick to what we know for sure, Al Faraj is a middle-aged (Monday's reports had him at 50 but he had lost 10 years by Tuesday) tycoon who controls a British Virgin Islands-listed company called Falcondrone. It's that company which has bought 90% of Portsmouth from Al Fahim.

His British lawyer, Mark Jacob (video below), who seems like a good guy, fleshed out this meagre CV a little when I spoke to him outside his office in London on Tuesday.

He described Al Faraj as a commodity broker who heads his family's private investment trust. That trust invests in property and has a stake in Saudi petrochemicals giant Sabic (although the company and the Saudi stock exchange declined to answer my requests to confirm this).

Jacob, who will be representing his client on Portsmouth's board, also assured me Al Faraj is a football nut who has been looking to get into the English game for some time. He added they will both be attending Pompey's next match, which is at home to Spurs on 17 October.

Hold on. Tottenham? Honestly, you couldn't make this stuff up. The north London club is the greatest beneficiary of the Pompey fire sale - Fratton Park favourites Peter Crouch, Jermain Defoe and Niko Kranjcar all now reside at White Hart Lane - which is hardly surprising when you remember that Harry Redknapp, the man who led Portsmouth to FA Cup glory only 17 months ago, now manages Spurs.

In fact, you could argue it was Redknapp's policy of signing players of such quality as Crouch, Defoe, Krancjar and co - plus Gaydamak and Storrie's willingness to pay them top-whack wages - that got Portsmouth into this mess.

I've already written about the financial implications of building a dependable Premier League team capable of cup success and basing it at a ground more suited to League One, so I won't do it again. Suffice it to say the money will run out in the end.

And that is what happened in December 2007. It was then that Gaydamak told Storrie to start balancing the books. It was a nice idea but at least a year too late, particularly for a man whose own finances had been credit-crunched.

Al Fahim (remember him?) was supposed to be the solution - a major player in the Middle East with the cash and energy to drive through the redevelopment of Fratton Park, create an Arsenal-style academy/scouting network, refinance the bank loans that had been keeping the show on the road and give manager Paul Hart the money he needs to maintain Pompey's Premier League status.

He's packed a lot in to his 32 years - he's also enjoyed a spell as a reality TV Sir Alan Sugar/Donald Trump - but his attempts to break into English football have been embarrassing. If he tries to make it third time lucky at my club, I will padlock myself to the stadium gates. 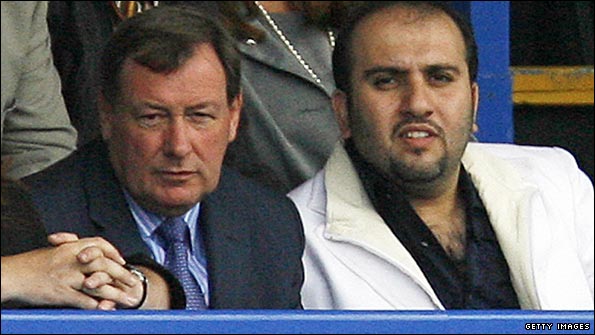 Which brings me to this remarkable saga's list of still unanswered questions.

If Al Fahim has no money (he was unable to even pay the wages at Fratton Park last week) and brings so little to the table, why does he still have a 10% stake and an honorary role at the club?

How could a recently successful club that plays in the world's richest football league get so close to administration?

Why aren't the league's officials means-testing prospective owners to make sure they can service existing debts and keep the club in business? Is the new "fit and proper person test" already unfit for purpose?

How much, if anything, did Al Fahim actually pay Gaydamak for 100% of the club in August? How much did Al Faraj pay Al Fahim for 90% in October?

Why didn't Gaydamak sell the club to the seemingly more solvent Al Faraj in August - Storrie said at the time the French-Russian-Israeli investor would rather put the club into administration than sell to Al Faraj - but then sanction the deal this week?

And why did Gaydamak, a man who has been looking for a way out for months but remains a creditor at the club, retain veto status after his sale to Al Fahim? What was the rationale for holding on to vital redevelopment land around the ground if he intended to sell it eventually to the next Pompey owner, whoever he may be, for £1?

I could go on but I won't. We've all had enough and it is only fair to give Al Faraj, Hart, Storrie, the squad and fans (especially them) a fair crack at a fresh start. Now that somebody has finally paid up, it is time for Pompey to play up.