End in sight for Pompey's blues?

When Sulley Muntari slotted a penalty past Manchester United's stand-in goalkeeper Rio Ferdinand in a FA Cup quarter-final on 8 March, 2008, he was taking Portsmouth supporters to heights they had not experienced for half a century.

OK, there had been cup runs in the '90s but Harry Redknapp's talented side was also chasing a top-six finish in the league. These were the best of chimes for Pompey fans.

They could be forgiven, then, for missing the muffled ringing of alarm bells. Because that team, which two months later beat Cardiff in the FA Cup final, was living way beyond its means.

The fans didn't know it at the time (how could they?) but those months in the spring of 2008 were as good it gets. The question now is will they be as good as it's going to get for a very long time? 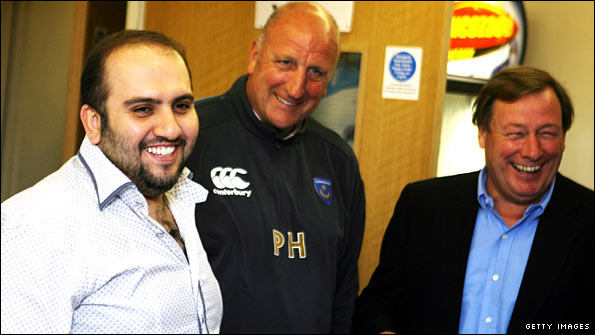 Until the last 48 hours the sensible answer to that question would have been yes.

But Wednesday's announcement that a consortium led by current chief executive Peter Storrie is in talks with owner Alexandre "Sacha" Gaydamak about buying the club was perhaps the first ray of sunshine in a miserable summer for the Hampshire club.

I say perhaps because while the talks are said to be "progressing" they are also perplexing - details are as thin on the ground as reinforcements for manager Paul Hart's threadbare side.

What we do know is that Storrie, who has been a popular presence at Fratton Park since 2002, has lost faith in proposed new owner Sulaiman Al Fahim's ability to close a deal fast enough to give the team a fighting chance of Premier League survival (which they still have).

Given the numerous conversations I have had with the Dubai-based property developer's camp, I would say this is a reasonable conclusion for him to have reached. As the de facto boss at Portsmouth, Storrie is understandably more focused on the here and now than his would-be employer (whose constant refrain is of a "long-term vision").

Storrie, a former director at West Ham, Southend and Notts County, will have known any chance of Al Fahim's takeover being completed in time to release funds for this transfer window has passed. He was probably starting to worry about the next transfer window, too.

Al Fahim has been Pompey's sugar daddy-in-waiting since May, when he first announced his intention to buy the club from Gaydamak (who has spent most of 2009 vying with Newcastle's Mike Ashley for the 'I'm a club owner...get me out of here' prize) for a fee believed to be in the region of £60m.

His status got a little sweeter in July when his accountants finished their forensic exploration of Portsmouth's finances, which must have been grisly work, and he became the club's non-executive chairman. He also passed the Premier League's new and improved "fit and proper person test".

And then, well...nothing. The last three weeks have seen only claim and counter-claim about his readiness to proceed, further speculation about Pompey's finances and more talk of player sales. They also witnessed the team lose its first two games of the Premier League season. 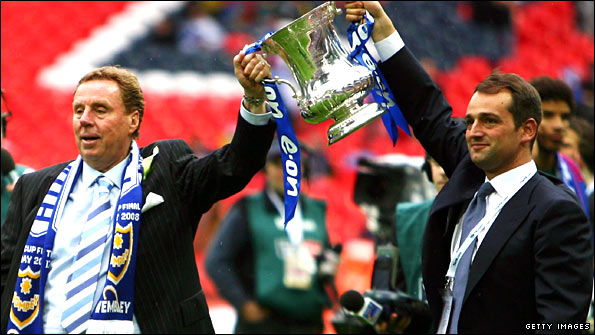 Only last week Storrie told fans "there's been enough talk...if (Al Fahim) is going to take over the club it is about time he do so".

So how on earth, to echo goalkeeper David James's weekend newspaper column, did Portsmouth get into this mess?

It is actually very simple and the clues were there that spring day at Old Trafford.

As friendly neighbours Southampton know, teams that live the dream often don't wake up until League One. And Pompey's current plight was more predictable than most as it is a Premier League outfit already playing in a League One stadium.

Harry's expensively assembled heroes might have delivered European football but they were gobbling up 78% of Portsmouth's annual revenue. The good news was that this was down from 92% the year before; the bad news was that Pompey was still losing nearly £1.5m a month.

The only real surprise here, however, is that this should be a surprise. A stadium with only 20,000 seats - none of them the warm and comfy types free-spending corporate customers like - cannot pay for players as good as Muntari, Lassana Diarra, Glen Johnson, Pedro Mendes and Jermain Defoe, who was cup-tied during Pompey's Wembley run.

What was actually paying for these guys (and many more) were IOUs to two banks and Gaydamak himself. The French-Israeli businessman first pitched up on the south coast in January 2006 with a £20m loan to prop up the previous owner Milan Mandaric's regime.

Six months and some Redknapp-inspired escapology later, Gaydamak bought out Mandaric for a reported £32m. Determined to consolidate his team's top-flight position, the 33-year-old then borrowed £44m from South African bank Standard and British institution Barclays and handed most of it over to his manager for players.

These loans were secured against Portsmouth's future TV revenues and scheduled for repayment this summer. Any takeover at Pompey now, be it Al Fahim's or Storrie's, will need the banks' approval.

The plan, of course, was to make all this red ink disappear with revenue from a shiny new stadium. Unfortunately, various Pompey owners have been trying this ever since the city's old airfield was suggested as a site for a new ground in the 1960s. Since then there have been numerous schemes that have run into problems ranging from protected birds to dodgy transport links.

The last five years alone have witnessed four different ideas, my favourite being the one to build a 36,000-capacity ground on reclaimed land in Portsmouth Harbour. It took a while but somebody finally pointed out the lunacy of doing this in a city that is already an incredibly cramped island. The Royal Navy also said the new island might get in the way of its aircraft carriers.

The club has now committed to redeveloping Fratton Park, which was built in 1898, by turning the pitch 90 degrees and building bigger stands. This is supposed to add 5,000 seats by next season and another 5,000 the season after.

The banks, particularly Standard, want their money back before that, hence the fire sale that started last summer with the departures of Muntari and Mendes, gathered pace this January with the exits of Defoe and Diarra, and continued this summer with Johnson and Peter Crouch also leaving.

That little lot brought in nearly £80m. Sadly, it has gone straight out the door again to service those debts, as has the first tranche of Portsmouth's TV money this season.

But not only have stars been sold to balance the books, squad players have been released to get the wage bill down. And with the veteran Antti Niemi recently becoming the fourth goalkeeper in a tiny first-team squad rumours abound that England's James might be on his way, too.

It goes almost without saying that Redknapp has moved on as well.

Predicting what happens next is guesswork. Storrie and Gaydamak are saying nothing until next week.

Al Fahim's spokesman Ivo Ilic Gabara has issued a face-saving statement on his boss's behalf about the move "to forego full ownership" being "a step in the right direction" whilst pledging his commitment to the "takeover, club and supporters".

It's brave stuff from a natural showman but having been removed from the Manchester City limelight by his Abu Dhabi-based bosses last year, a second failure to see a deal through to its conclusion would seriously damage the 32-year-old Al Fahim's chances of ever owning a Premier League club.

Hart, who has to get his players ready for a daunting trip to Arsenal on Saturday, told reporters on Wednesday: "We're all keeping our fingers crossed - I think it is imminent."

Let's hope so, because one thing is certain in all this, Pompey's fans deserve better fare than the farcical scenes they've been served up of late.