Stepping out of the Superbike shadow

With two free weekends between the Czech Republic Grand Prix and the next round at Misano, there has been plenty of time to reflect on a breakthrough moment for British motorcycling.

Cal Crutchlow's first podium in MotoGP was a first for our country since Jeremy McWilliams back in 2000 – and it feels good to know that's the last time I will have to reference that stat!

Many outsiders will think that it's about time we had some success in this sport, which has a huge and loyal fanbase in this country and has produced its fair share of top-class riders over the years – even though we have been waiting for a premier-class Grand Prix victory since the late Barry Sheene last celebrated at Anderstorp, Sweden, in 1981.

The main reason for this lies within the culture of motorcycle racing on a national level, which over the past two decades has revolved around production racing, i.e racing bikes you can essentially buy in your local dealership.

A thriving British Superbike Championship has developed riders ideally suited for its World equivalent and our success there – particularly that of Carl Fogarty in the 1990s – created the momentum that allowed other young British talents to thrive in that particular series, most notably Neil Hodgson and James Toseland. 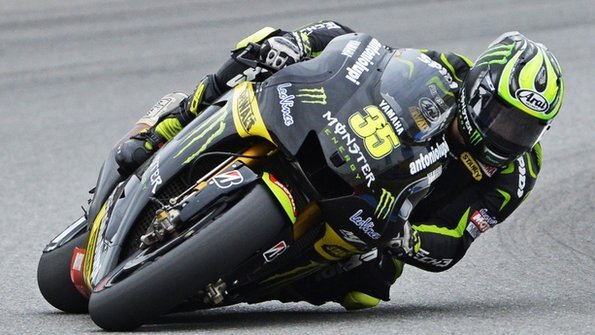 Before his success in MotoGP Cal Crutchlow was a winner in World Supersport and World Superbike racing. Image: AP

A look at this year’s World Superbike standings shows that we currently have five riders competing for wins and the top five in the second race in Germany on Sunday were all from Britain or Ireland.

Their success has obviously not been a bad thing for British motorcycle racing, but it has certainly had a negative effect on our fortunes at the elite level of MotoGP.

While Fogarty did little more than dip his toe in the then-500cc World Championship, dominated at the time by the fearsome Mick Doohan, both Hodgson and Toseland made a more concerted but ultimately doomed attempt to blaze a trail in MotoGP for British riders in recent years.

Both riders had legitimate complaints about the tools they were given for the task – Hodgson in particular – but I am a great believer that any bike in MotoGP is enough to impress the people who matter, providing you show sufficient promise, and the bottom line is that both Hodgson and Toseland were unable to master the nuances of prototype racing in the short time they were afforded.

It was with great interest that I watched Matthew Syed's contributions to the BBC's coverage of the Olympic Games and by coincidence on the journey home from Brno I was reading his book Bounce, which offers an insight into why this might be.

In a first part entitled The Talent Myth, Syed explores the concept that thousands of hours of practice in a particular field is the only way to excel in it, whether that be sport, music or indeed any other practice.

Syed cites one particular study conducted back in 1991 by Anders Ericsson, a psychologist at Florida State University, on a group of violinists at the Music Academy of West Berlin in Germany. Ericsson found that without fail the most 'talented' violinists in the group – those earmarked by their tutors to become international soloists - had practised for an average of 10,000 hours by the age of 20.

This compared with an average of 8,000 for the 'good' violinists, those tipped to play in the world's top orchestras and 4,000 for those expected to go on to be music teachers.

Syed outlines the relevance of this theory to sport and argues the case that the ‘10-thousand hour rule' (also known as the ‘10-year rule' as a thousand hours is considered the optimum amount of practice per year) “is the minimum time necessary for the acquisition of expertise in any complex task.”

One example that particularly struck me was a study that showed how professional tennis players are instinctively able to judge the trajectory of an opponent's serve before it is made, due to an ability to read their body position, based on hours and hours of observation.

I believe that this theory also applies to motorcycle racing. While most professional racers start life on two wheels at a very early age, those who gather the experience of riding Grand Prix motorcycles from as young as 15 are far better equipped for the demands of MotoGP than those who make the switch at a later age from production racing in the Supersport and Superbike classes.

There are other contributory factors of course, but it can be no coincidence that the four men who have dominated MotoGP in recent seasons - Valentino Rossi, Jorge Lorenzo, Dani Pedrosa and Casey Stoner - all came through the 125cc and 250cc Grand Prix classes.

Going back to the start of the four-stroke MotoGP era in 2002, there have been a total of 182 races, with only eight of them won by riders who had not previously competed in at least one of the smaller GP classes: Nicky Hayden (three wins), Makoto Tamada (two), Troy Bayliss, Chris Vermeulen and Ben Spies (one win each).

A prototype chassis, carbon brakes and slick tyres make for a machine with very different behavioural habits to that of a production motorcycle, which among many things is a far heavier, more flexible piece of equipment. Superbikes also have slick tyres but Supersport, their junior equivalent, must be fitted with road legal rubber.

Without hours and hours of practice on these machines and tyres, it is extremely difficult for riders to form the kind of instinctive reactions required to predict the behaviour of a MotoGP bike.

After riding a MotoGP machine for the first time last week Northern Ireland's Jonathan Rea, who will stand in for the injured Casey Stoner for the next two rounds, talked about having to adjust his braking style, improving corner exit and learning how to adjust his riding when the tyres are worn.

Having lapped three seconds shy of team-mate Pedrosa in an initial one-day test at Brno he managed to halve the deficit over two days at Aragon but, as with all of the British riders who have gone before him in MotoGP, the final few tenths will no doubt prove the most difficult to find.

All this goes to highlight not only how difficult it will be for Jonny to be competitive at Misano and Aragon, but also the magnitude of Crutchlow's achievement to finish on the podium having only moved to MotoGP last year at the ripe old age of 25, having progressed through the British and World Supersport and Superbike ranks.

The next step for Cal, of course, is the top step and breaking up Pedrosa, Lorenzo and Stoner's dominance of it will be a mammoth challenge.

I moved onto something of a prototype machine myself this week, throwing my leg over Victoria Pendleton's old Pinarello Dogma bike to take part in the 'Cycle of Wishes', an 1,800km ride from Donington Park to Misano in honour of Marco Simoncelli.

In fact, by the time you read this we should already be well on our way through northern France.

Having only ever ridden a mountain bike previously, it has certainly been a steep learning curve since I picked the bike up three weeks ago and I've definitely not managed to get in 10,000 hours of practice.

Making it to the end of the ride and raising plenty of cash for charity is the only goal here though and we hope the effort will be a worthy tribute to Marco, who will be at the forefront of all our minds as the paddock assembles at his home circuit, which has been renamed in his honour, almost a year on from his untimely death.

To find out more about the ride and how to donate to the Marco Simoncelli Foundation and the other charities that are to benefit, visit www.cycleofwishes.com.

Hi, I'm Matt Roberts and I present the BBC's coverage of the MotoGP World Championship, a series I've been reporting on since 2001, and the NFL. You can follow me on Twitter.

You can stay up to date with Matt Roberts via these feeds.