I have just landed in Manchester having spent two seven-hour flights wondering how I could ever possibly begin this blog that I have been asked to write. During that time I came up with nothing.

There can be scant higher praise to bestow on Marco Simoncelli than saying that he was the most exciting thing to happen to motorcycle racing since Valentino Rossi.

As outrageous on the track as he was off it, his wild afro hairstyle and swashbuckling riding style won the hearts of fans all over the world. His death has brought us all to our knees. 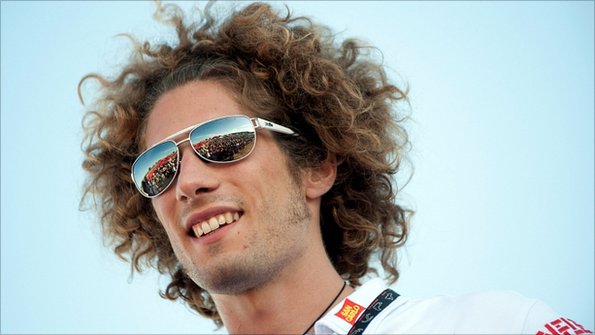 Simoncelli brought his unique style to the world of MotoGP. Photo: Getty

Inspired by Rossi but quite evidently another maverick entirely of his own breed, Marco feared no rival and made no allowances for reputation, not even that of his great friend, the greatest of all time.

His final act was a lap and a half of pure adrenaline, swapping positions with Alvaro Bautista, a familiar foe, with trademark panache and derring-do. Riding on the edge, the only way he knew, delighting in his own impudence and improvisation, revelling in the one act he loved the most.

His two race performances before that were arguably the best of his career, both of them breathtaking battles to the finish with compatriot and another fierce rival in Andrea Dovizioso. Marco won out on both occasions to take fourth - despite a ride-through penalty - and second - his career best result - at Motegi and Phillip Island respectively.

In those two races the signs were there that he had finally managed to curb the overly combative style that had cost him further podiums or even wins earlier in the season and worked out how to channel his fearless aggression in the most productive manner. Up to then it had been the only chink in his armour.

Dovizioso and Bautista both had previous with Simoncelli from their days together in the smaller classes, as did the likes of Jorge Lorenzo and Dani Pedrosa, the most vocal amidst virtually unanimous criticism of his riding in the early stages of this season - particularly after a collision with Pedrosa at Le Mans left the Spaniard with a badly broken collarbone.

Under pressure from his peers and from the media, Marco's confidence took a beating but it did not crack. He seemed to know what the fans wanted and his refusal to be intimidated by the establishment endeared him to them even more.

At Silverstone I had the pleasure to introduce him to many of you at the Day of Champions auction, where he was given the loudest cheer of the evening - a hero's welcome. I know it meant a lot to him, confirmation that he should never change his ways. Believe me, your esteem was mutual.

Always accommodating, pleasant and professional, I never saw Marco say no to an autograph or a photo. That was not because he enjoyed the attention, he simply took great pleasure in making other people happy.

Marco was not a rider that would sulk or hide. If he crashed out of practice or a race he would always front up and talk to the cameras and if it was his fault he would readily admit it, occasionally behind sunglasses to hide the tears. At Phillip Island he crashed three times during practice in the same corner. The second and third, he joked afterwards, were just to confirm what happened the first time.

At Le Mans earlier this year he agreed for us to interview him in his motor home between practice sessions, asking us if we minded that he eat his lunch - a plate of plain spaghetti - while we set up our cameras in his living room. "Of course not," I said. When I thanked him after we had finished filming he replied as he always did, with a firm handshake: "No problem. Thanks to you."

Born with talent but raised with humour, humility and good manners, Marco is a credit to the grief-stricken family left to mourn him. His father Paolo was at Sepang, as he was at every race, a chest we are so used to seeing bursting with pride now so devastatingly deflated by unthinkable hurt. For his son to depart at the age of 24, fatally struck by his hero and mentor, is a grave injustice to all of them.

There will be ramifications for our sport. Doubtless there will be questions about the immediate futures of Rossi and Colin Edwards, already in the twilight of glittering careers, and that of Team Gresini, who were relying heavily on Honda's support of Simoncelli for 2012 - their mutual faith in his future confirmed in a contract penned just three weeks ago.

But the sport itself will survive and will eventually be safer and stronger for this tragedy. It is important to remember that for every life that is lost in this way many thousands more are saved every day by the improvements made in rider protection and circuit design.

Sepang was a bruising weekend with several crashes, including those of Pedrosa and Ben Spies adding to those of Moto2 riders Marc Marquez, Bradley Smith and Axel Pons, who remains in hospital in Kuala Lumpur under observation for a sub-cranial haematoma.

The pain of these riders ultimately provides more valuable data that will help in making their chosen profession and passion as safe as it can possibly be yet, sadly, the quest for risk-free motor racing can never be fulfilled. It is a common and bitter irony that our sport's greatest appeal is also its greatest pitfall.

Motorcycle racing brought Marco Simoncelli to his death but it also brought him to life and you can rest assured that he would not have lived it any other way. Nor would any of his competitors, which is why they will all line up again in Valencia in less than two weeks' time, hand on the throttle, eager for those start lights to go out once again; hoping for the best, prepared for the worst.

Hi, I'm Matt Roberts and I present the BBC's coverage of the MotoGP World Championship, a series I've been reporting on since 2001, and the NFL. You can follow me on Twitter.

You can stay up to date with Matt Roberts via these feeds.