What will Commonwealth legacy mean for Indian sport?

The Commonwealth Games have come to an end and, despite the usual end-of-event tiredness, I'll be sorry to depart India.

It has as ever been a privilege to cover a multi-sport event and it is a position and an opportunity that I don't ever want to get bored with.

I was sent out to see the very first event and was there to see India’s Saina Nehwal step off the court having won the women's singles badminton title. Fittingly, India’s final gold medal propelled them past England on the medals table - a massive achievement for the hosts.

The best realistic legacy that I can hope for is that the Commonwealth Games of 2010 mark the emergence of India as a power at future big sporting events.

On the biggest stage of all, at the London Olympics in 2012, India should contend for a top 10 finish.

It is easy to sweep a lot of their medals under a carpet marked "it’s the Commonwealths" or "wait until Team GB are around" but India's wrestlers, shooters and boxers are of world class.

It’s an old cliche to remark that India is a country of contrasts but even inside the air-conditioned, carpeted halls of the Games there have still been huge divides. 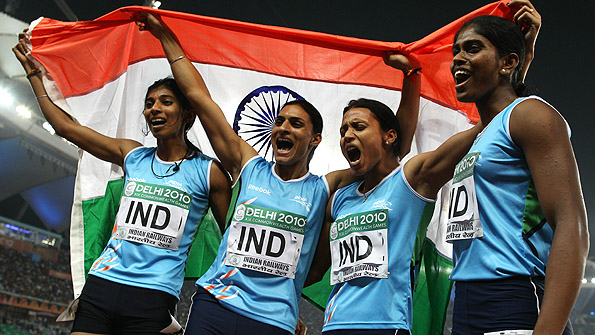 Contrast the near disaster surrounding the start of the Games with the triumphs of the second week, or the diligence of the volunteers - sometimes hopelessly equipped for their role - with the graceless charge of the dignitaries to get close to Indian medallists.

Put the overall safety that one of the largest armies in the world has provided up against the soul-sapping inconsistency between the paperwork required from one checkpoint to the next.

I'm not sure whether the act of hosting this has helped India's chance of hosting a future Olympic Games or not.

Influential people within the Olympic movement will have seen some of the issues up close in the last month and yet the Indian triumphs of the last week will also have gone round the world.

The Olympics won't have missed the idea that India has embraced a multi-sport event in a way that rivals cricket, and a 'market' of a billion people is a strong draw.

What must change for any Olympic bid to get off the ground is a change in the way the event has been staged.

Delhi somehow managed to combine the worst inefficiencies of what has been termed "Old India" by the media here and the political machinations have begun as those in charge look to grab the glory and shed the blame. There must be a better way.

The last irony is that the Commonwealth Games organisers have apparently made no provision for sport in the future - buildings aside.

There is no cash injection waiting to flood in to athletics, cycling or hockey. What use are some of the best facilities without droves of people to use them - that has got to be a worry.

I went to a traditional wrestling academy in Old Delhi three days ago. It was the training base for nearly 40 men and boys who wanted to become Indian stars.

It is totally self-funded - the wrestlers take what they earn in the dirt-square competitions that India stages city-by-city and plough it into the academy.

Some of them sleep on the wrestling mat the others on the hard concrete floor.

Ropes hang from the trees which every wrestler is expected to climb using arms only, the dirt was dug and flattened by hand. Days started early with prayers in the on-site shrine and an hour of running the roads of the city.

All of them know India’s top wrestlers and most of the international ones. Medallists are gods.

That's the image that I want to leave India with - the simple relationship between the champions on the television and the desire in the downtown wrestlers. In them, and thousands like them, the future of Indian sport rests.

In a previous life I won four gold medals at the Olympics between 1992 and 2004 and I now work at the BBC. Whilst I was part of the Beijing team for the BBC in the summer of 2008, my primary role is as reporter for Inside Sport. I've been told to expect some slings, arrows and some lively debate - if you'd like to direct the first two to my editor's blog and the last right here.

You can stay up to date with Matthew Pinsent via these feeds.