My turn with the torch

What a nice email to get, an invitation to carry the 2010 Winter Olympics flame - and when someone asked "Oh, Vancouver, what are you going to be doing there?", it became an easy conversation.

But the reality seemed less exciting somehow. It meant leaving home days ahead of an already long trip on BBC duties as three weeks became a full month away from my wife and young children - however strong the draw of the Olympics, saying goodbye to three year olds for a month is hard. 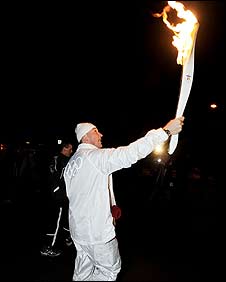 Even surrounded by the beauty of the Whistler snow and joyous, celebratory Canadians on the day before my torch run, it still seemed illogical. What was I doing? Why had they asked me?

To make things worse, when I turned up for the pre-run briefing only to find my paperwork had been wrong and not only was I in the wrong place but I was late too.

While the organisation of the runners into groups to be bussed out onto the road was normally precise - thousands of runners have covered 45,000 kms across Canada in the last three months- I'd somehow fallen between the cracks, so what should have been a calm hour or so before the run became a flurry of activity.

"Wait, wait," I cried. "I don't know anything, you have to give me the short version of the briefing." So our guide did - "Hold the torch with the small maple leaf facing towards your heart, when the previous runner gets close to you someone will switch on the little gas canister inside your torch, touch the tips, transfer the flame and and then run your leg. Congratulations, this is your Olympic moment."

But with that simple statement I felt deflated - a stranger in a strange land - this could never be my Olympic moment, I've raced and won, carried the flag and cried my eyes out. I have all those memories already and I'm now clogging up someone else's party by being here.

Moments later, I was sitting in the front row of a 20-seater bus filled with anonymous, nervous torch bearers as the bus rattled out to it's start position.

There were local people, chosen often by their colleagues or neighbourhood to represent them, First Nation youngsters, business leaders and civic leaders - one woman only knew 15 minutes before the briefing that she was doing it, one woman was running for her brother who was fighting cancer - and there were three Olympians, a skier who finished fifth for Canada in Albertville in 1992, Steve Podborski, who won a downhill bronze in Lake Placid in 1980, and me.

There is one more former athlete, a local man called Steve. It's only just as he's getting off the bus he that tells us all his story. He was a middle distance runner in the late 70s and was chosedn for the Moscow Olympics, only for the Canadian boycott of the Games to end his dream.

Now, 30 years later, he gets to complete the circle in front of his grandchildren. "This is my Olympic moment," he says quietly as he steps down onto the road. 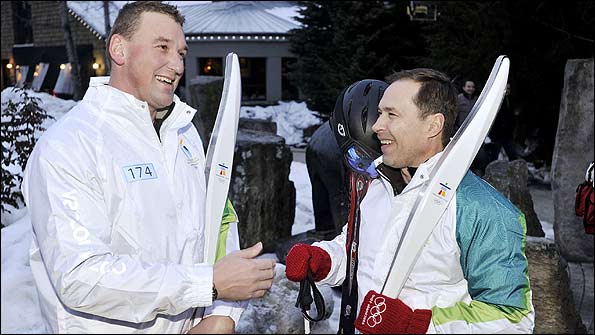 Then, I hear "Matt, number 174, let's go" and it's my turn to step out of the warm and into the dark on a corner close to the middle of Whistler. There is an enthusiastic group of fans to see the handover.

Then the glow appears up the road as Neil, my donor, completes his leg, we stand together, he wishes me the best and off I go. It's a steady pace - slow enough to encourage the neighbourhood to run with me, quick enough to send the flame curling and licking around the top third of the torch and up into the night.

The torch becomes the centre of a happy melee of people, flags, flashes, cheers and shouts. Then it's time for my handover as Drew, the next runner, steps out from the roadside to take his turn.

He runs gently away, the motor caravan and police escort surges past and another official steps forward to switch off the gas, my flame gutters and dies.

Some of the crowd step forward. I'd like to think it was me they wanted but the reality, of course, is that it is the torch - three and a half pounds of gas driven, purpose built, gracefully curving, beautifully engraved, easy to carry national pride.

If you are holding it you are the focus, during your brief run all eyes are on you - as Steve said, this is indeed your moment.

In a previous life I won four gold medals at the Olympics between 1992 and 2004 and I now work at the BBC. Whilst I was part of the Beijing team for the BBC in the summer of 2008, my primary role is as reporter for Inside Sport. I've been told to expect some slings, arrows and some lively debate - if you'd like to direct the first two to my editor's blog and the last right here.

You can stay up to date with Matthew Pinsent via these feeds.