A glimpse of life on the PGA Tour

Have you ever wondered what professional golfers get up to in the build-up to a tournament?

Even though we travel all over the US, my routine stays pretty much identical every week.

Here's what I do to get ready before Thursday comes around and the TV cameras get turned on... 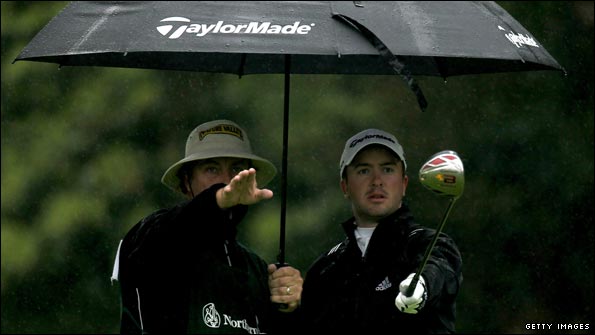 Monday: If I've been at home the week before then Monday is a travel day.

Most of the PGA Tour schedule is played in the eastern half of the US, so that normally means an early start at the airport in Phoenix before setting off for our next destination.

Once we arrive and get our car sorted out, it's straight to the hotel for an early night as I like to play early on Tuesdays.

Tuesday: This is the big practice day of the week for me.

If I'm not in the Wednesday Pro-Am, it's the only chance I'll get to see the golf course and how it's playing.

The Pro-Am is mandatory for the top 40 players in the field, based on the previous year's money list.

Things are a little easier for me now as it's my third year on Tour.

I know most of the courses and don't need to try to collect all the info on the greens and hole layouts in one day.

I have yardage books from previous years that have all my notes, which are very handy - if I remember to bring them!

That was maybe the hardest thing as a rookie in 2008, having to learn a new golf course every week.

I normally get to the course just before 7am to get organised for the week ahead.

I like to play early on Tuesdays to beat the rush. If you turn up a bit later then you've got to be prepared for a five-hour round - definitely not what I'm looking for.

If I can convince any of my mates to play as early as me then I'll sometimes get a game set up, but I mostly like to just turn up and go myself if no-one is around.

I don't mind playing practice rounds alone as it gives me a chance to get some good work done with my caddy and coach.

My coach, Mark McCann, travels to most tournaments as he works with a few guys on Tour.

I also prefer to get a lot of my short game practise done on the course as it's a lot easier than the chipping green.

There are normally balls flying everywhere and the conditions are rarely identical to the greens that we'll play on.

On Tuesday afternoon I do any work that needs done which is hopefully just some sharpening up. I might also get some club work done.

I'm not an equipment tinkerer but I'll maybe get my lofts and lies checked and some new grips thrown on my clubs. That needs to be done roughly every six weeks.

After doing some short-game work and hitting a few more balls to make sure it all feels good, I always finish practise with a couple of putting drills.

I don't always want to do them but I feel they are really important. It's a small goal that I make myself complete every day before I can go home.

I don't know why, but when I finish them I feel a lot better about my practise and feel that I can go home and know that I've done my work.

I'm the type of person that would have a hard time looking back and thinking that I could have worked harder to achieve more. Those small goals really help.

Next up is the gym. Nothing too strenuous when on the road but it's important to get in there and get some work done.

I've just started working with a new trainer in the PGA Tour trailer.

We're doing some good things that will hopefully help my game in the short and long term. I used to workout a lot but got out of the routine, so it feels good to be back at it.

After that I head back to the hotel for some dinner.

Wednesday: What time I practise on Wednesday is dependant on when I'm down to play on Thursday.

If I have a morning tee-time I'll practise in the morning on Wednesday.

Sessions normally last about three hours and are pretty much divided into an hour each for long game, short game and putting.

I take it a little easier to try to conserve some energy for the next four days of competition.

That's a pretty common approach amongst the guys on the Tour.

Tuesday is the day you see the real grinding going on and Wednesday's are a little lighter.

If you don't have it sorted out late on Wednesday you probably aren't going to find it before Thursday's round.

I was born and bred in Glasgow, but now I live in Scottsdale, Arizona, and make my living on the US PGA Tour. I won my maiden Tour event in October 2009 - the first Scot to do so on US soil since Sandy Lyle won the Masters in 1988. I want to win again and play in this year's Ryder Cup, so I'll be letting you know how I'm going about it, as well as providing you a behind the scenes look at the PGA Tour.

You can stay up to date with Martin Laird via these feeds.