A celebration of the riches of the web.

Today in Web Monitor: the result of a comedy show audience's political manifesto, Generation X and the end of pop culture and reading the mood of graffiti. 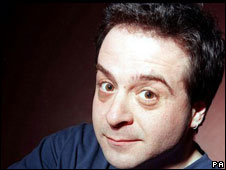 • Activist and comedian Mark Thomas is giving someone the chance to stand in the next election with a manifesto collected from ideas thrown about at his comedy gigs. He's produced the "people's manifesto" which includes, among the anti-MP, anti-banker anger he says you might expect, a promise of more feral chickens breeding on round abouts to encourage drivers to slow down, celebrity death requests and more:

"One chap in Leicester wrote:
'Everything in supermarkets should be stacked in alphabetical order.' Pondering a world where Hovis would be found next to Hobnobs or coffee next to cotton wool, I congratulated this chap saying that I thought his policy was very funny. He fixed me firmly with a glare and said, 'It's not funny, it's serious. I can't find anything.'"

• The writer who popularised the term "Generation X", Douglas Coupland, declares pop culture over in the New York Times magazine:

"I'm starting to wonder if pop culture is in its dying days, because everyone is able to customize their own lives with the images they want to see and the words they want to read and the music they listen to. You don't have the broader trends like you used to."

Questioned on how the the success of Avatar and Harry Potter fitted into this, he stuck to his guns:

• Quinn Dombrowski has carried out a longlitudinal study of graffiti scrawled on the walls of Chicago University's library. He says he hopes to gain an insight into student life much like insights of streetlife from Pompeii's ancient graffiti. He's transcribed 620 "pieces" of graffiti since 2007 and put them on his website, Crescat Graffiti, Vita Excolatur. He analyses students' declarations of love and hate to find whether they correlate with the seasons:

"The prevalence of graffiti referring to love, despair, and sex varies depending on the time of year, in rather surprising ways. Love peaks in October - right as the school year starts - and remains at that high level through November, when despair also peaks (around the time of fall quarter midterms). After November, both love and despair graffiti drop off significantly until spring. Love peaks again in April (beginning of spring quarter) before falling off in May, when despair has its second peak."