A celebration of the riches of the web.

Online zombies and the birther subculture rub shoulders in Web Monitor. Share your favourite bits of the web by sending your links via the comment box.

• Birthers are the Republicans in US politics who are arguing that President Barack Obama is not a US citizen, and trying to prove that he was not born in the United States. The YouTube film Birthers on the Hill tries to track these people down to get them to explain their theories but on the whole the reporter Mike Stark from Fire Dog Lake online political reporting group runs around more than Anneka Rice on a mission to paint an orphanage.

"Out of the gaze of the mainstream and even the conservative media is a flourishing culture of advocates, theorists and lawyers, all devoted to proving that Barack Obama isn't eligible to be president of the United States. Viewed as irrelevant by the White House, and as embarrassing by much of the Republican Party, the subculture still thrives from the conservative website WorldNetDaily, which claims that some 300,000 people have signed a petition demanding more information on Obama's birth..." 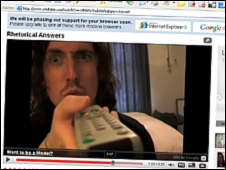 So if you're one of those people who tend to get teary at the thought of a choreographed majorettes march, then you better get your tissues as the Oddee Website has compiled the countdown of the strangest mass participation events. Fitting for the subject of participation, the real thrill comes in reading the comments below the article on the Oddee Website. One of the highlights is the Thrill Dance, which is a worldwide dance of the Thriller song, due to take place in the weekend before Halloween. Tom Kiss, the designer on the team has already set up a Zombie social networking site Crawl of the Dead.

If you are surprised that zombies could be so networked, check out Bryony makes a Zombie Movie - the BBC3 programme following a girl making a zombie move more or less by discussing it with volunteers on Skype who film themselves and put it up on YouTube. You might notice the scene at the beginning is very similar to the premise of the car insurance advert from confused.com - even the same actor Ben Loka, who is a prolific vodcaster, stars in the ad. Unfortunately for confused.com Loka's on YouTube complaining about too much advertising funnily enough.

Incidentally, another character in the adverts, Amazing Phil, as he calls himself in his blog, explained how he ended up on the same advert and then talked for a bit too long about his love for love heart sweets. We're sure the feeling is mutual.

• The "free" debate Web monitor has been tracking is spreading to Canada. Columnist for the Globe and Mail Mira Sundara Rajan is arguing that copyright laws - something hindering a legal free economy - need to be improved to reflect the digital age:

"We need to know what is and is not permissible when we deal with new technologies, if we are to be comfortable when we exercise our rights and confident when we attempt to fulfill our obligations."

The debate goes on...