Welcome to David Bain's Brain Strain - a forum for Monitor readers to debate philosophical matters and, in so doing, find a worthy distraction from the demands of the workplace.

Read on and then add your thoughts to the debate using the comments form. Remember, this is philosophy - there IS no right or wrong answer. (The brain strainer will read all your comments before, in a couple of days, returning to offer his thoughts on the debate.)

Shocking breakfast news: a certain Mr Cronus has been killing and eating human newborns for snacks. To take our minds off it, we focus on our bacon and eggs. But is bacon the right comfort food?

Think about why we're outraged. It turns out that Mr Cronus kills only orphans, and does so painlessly. But, even so, his victims were living beings, sentient and innocent. Killing them for snacks is obviously and seriously wrong.

Fair enough. But pigs were killed for our breakfast. And they're living beings, sentient and innocent. So some fancy footwork looks to be required if we're not to be hoist over the breakfast table by our own petards. 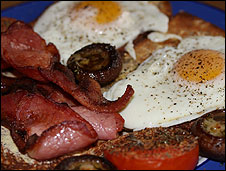 Not very fancy, you might say. There's an obvious difference: the newborns were humans, the pigs not. But that can look as unpromising as the following: "It's worse to kill white people than black people because white people are white and black people not." If colour differences aren't important, why are species differences?

Because, you might reply, species differences correlate with other differences. We humans are smarter than pigs. We're self-aware. We anticipate our futures and engage in long-term projects. So, when killed, we're harmed in ways pigs can't be.

But even if that's true of you and me, what about the newborns Mr Cronus was snacking on? Pigs are more intelligent than dogs and perform impressively in many cognitive tests. They wouldn't give you or me a run for our money, but they would a newborn.

Yes, you might say, but newborns will develop into people more intelligent, self-aware, and future-oriented than pigs. True, and so will foetuses. But why is such potential relevant before it's realised?

Perhaps there's a good answer to that. But even if potential is relevant, what about those newborns who sadly lack it? If Mr Cronus killed only them, would that be okay? And, if not, isn't it equally wrong to kill pigs for bacon?

David Bain is a lecturer in the philosophy department of the University of Glasgow. Find out more about him by clicking here.