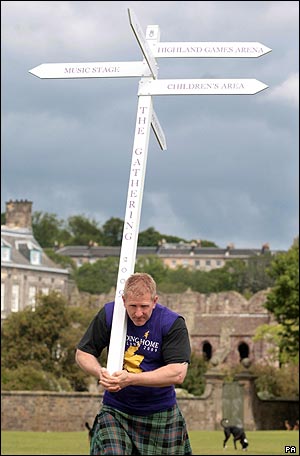 In this picture, a man helps launch the Gathering 2009 at Holyrood Park in Edinburgh.

6. Lloyd-Barnes Donald was suspicious about the new Setanta aerial he purchased on ebay.

5. chris_in_paris
Filming is now well underway on Mel Gibson's controversial combined sequel to The Passion of the Christ and Braveheart.

3. dry_boak
Meanwhile, a small dog in the background was wondering where the hole in the ground had suddenly appeared from.

1. LaurenceLane
Angus wasn't so much a Renaissance man as he was a post impressionist.