Fans of the Magazine may remember a few months ago philosophy expert David Bain presenting four problems to make your brain hurt.

Hopefully any residual cerebral aching has now abated, clearing the way for Prof Bain (that's him in the picture above) to return, this time in the Monitor. Welcome to David Bain's Brain Strain - a forum for Monitor readers to debate philosophical matters and, in so doing, find a worthy distraction from the demands of the workplace.

Read on and then add your thoughts to the debate using the comments form. Remember, this is philosophy - there IS no right or wrong answer. (The brain strainer will read all your comments before, in a couple of days, returning to offer his thoughts on the debate.)

Millions are being spent renovating the Cutty Sark. This would have worried the Ancient Greeks. Not the money, but that the renovators might be creating an imposter. For, over the centuries, renovation will cause the number of original planks to dwindle.

London Bridge, built in the 19th Century, raises a related worry. In 1971 it was reassembled in Arizona. Or was it? Being broken down into a pile of stones destroys a bridge. So how can that be London Bridge basking in the desert sun? 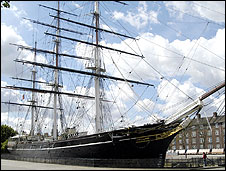 You might say the Greeks worried too much. It's obvious that the Cutty Sark can survive replacement of parts, and that London Bridge can survive reassembly. Your body is the same body you had a decade ago, but its cells have been replaced. And your car might be the same one you had a week ago, even if a mechanic disassembled and reassembled it yesterday.

Perhaps that is obvious, but the obvious can be hard to understand. For imagine that, as rotten planks are removed from the Cutty Sark, my family uses them to build a ship in Glasgow, giving each plank the position it originally had in the Cutty Sark. Eventually there will be two ships: one in Greenwich, one in Glasgow. Which will be the Cutty Sark?

So perhaps, in the imaginary case, neither ship is the Cutty Sark. But what do we say, then, back in the real world, about the ship they're renovating in Greenwich? One line is that it's the Cutty Sark but only so long as I don't build my ship in Glasgow. Yet it's strange to think that ship-building in Glasgow could make a ship in Greenwich cease to be the Cutty Sark.

But what else can we say, except that the replacement of a single plank destroys a ship? And if that's right, then not only their brains but their wallets should be hurting in Greenwich, since whatever they're spending their millions on, it's not the Cutty Sark.

DAVID BAIN UPDATE, 19 MAY: It's a week since I posted my Cutty Sark conundrum and I was very interested to read the variety of reponses it elicited.

Clearly, it's not just the Cutty Sark that has strained brains, as Monitir reader noted. The Greeks (Plutarch tells us) squabbled over the renovation of Theseus's ship, now the standard example of the puzzle. And, in Only Fools and Horses, Sid worries about Trigger's trusty broom, which Trigger admits has had 14 new handles and 17 new heads.

When Sid asks, "How can it be the same bloody broom then?", Trigger gets out a photo of the original and demands, "What more proof do you need?" It's a good question. And, in the Cutty Sark case, Magazine readers gave some interesting answers.

The Glasgow ship deepens the problem. When it's built, we have two ships, but apparently no grounds for saying which is the original.

Mittfh says neither is. But what if the Glasgow ship had not been built? Would the Greenwich ship then be the Cutty Sark? Answering "Yes" means that ship-building in Glasgow can destroy ships in London.

One might instead answer "No". After all, we're imagining that the Greewich ship has none of the original planks. But how many originals are needed? Surely one reaplacement doesn't destroy a ship. Perhaps an object survives just in case most of its parts are original. But this means your body is at most 10 years old, since most cells live no longer than that. Also, take ship X in 1900, ship Y in 1800, and ship Z in 1700. X might share most of Y's planks, and Y most of Z's, even while X doesn't share most of Z's. So the principle says that, while X is Y, and Y is Z, X isn't Z. But that's like saying that, while the murderer is Hyde, and Hyde is Jekyll, the murderer isn't Jekyll!

Mr Hyde also threatens Moriarty's idea that both the Glasgow and Greenwich ships are the Cutty Sark. But we could say that ships, like expenses scandals, unfold over time, not fully existing at instants, hence that was present at the Cutty Sark's launch in 1869 was not a ship but a phase of a ship, or rather a phase of two ships: the one whose current phase is in Greenwich, and the one whose current phase is in Glasgow. They share a phase rather as London's Marylebone Road and the A510 share a stretch of tarmac.

Or we might plump for one ship. But which? Most of the forum's plumpers pinned their colours to the Greenwich mast. Parsleyfeet invoked that ship's cultural role. Potkettle suggested that it alone was officially named the Cutty Sark. But that raises the question at issue, for the pro-Glasgow camp say theirs is the original ship, hence that it's the one officially named in 1869.

There are worries: I don't want my car to go out of existence when, after replacing a part, I decide to put the original part back in. But the proposal (made also by philosopher Jonathan Lowe) is interesting. And if it can be made to work, it blows away a dark metaphysical cloud (admittedly unnoticed) from over the heads of those renovators in Greenwich.