A service highlighting the riches of the daily press.

It could be the image that sums up the state of the nation. 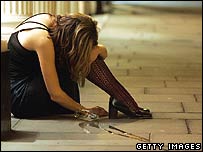 A woman in a strappy black dress and high heels sits slumped on an anonymous city pavement, one arm clutched around her knees, the other limp by her side. Her hair hangs lankly, conveniently obscuring her face.

A forlorn bottle of alcopops, perhaps Smirnoff Ice, has tipped over, its contents dribbling down the pavement away from her.

It's a Hogarthian vision of the typical British night out and it's the first port of call for newspaper picture editors wanting to illustrate themes of booze, moral decline and girls gone mad. It features in both today's Daily Mail and Daily Mirror to illustrate a massive rise in arrests of women for being drunk and disorderly.

The image was taken in February 2005 in Bristol by the Getty Images photographer Matt Cardy.

But who is the girl? Is she still an acolyte of the temple of the alcopops? Three years on, does she still finish her nights out with a quick power nap on the pavement? And how does she feel about her routine appearances in the media? Get in touch using the post form, above right.

Elsewhere in the Mail there is a beautifully worded apology to Lisa Marie Presley over a recent photo of her dining with friends.

"We suggested she might have an unhealthy appetite similar to her late father. We now accept that the suggestion is untrue."