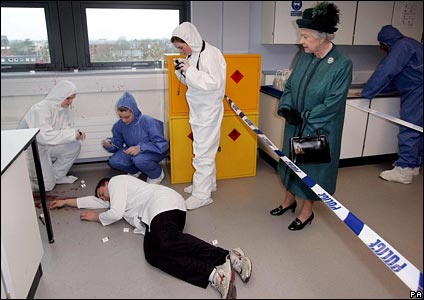 It's time for the winning entries in the caption comp.

This week, the Queen looks on as forensic science students demonstrate the collecting of evidence at a simulated crime scene during a visit to East Berkshire College, Windsor. But what's being said?

1. Robin, Edinburgh
"I think it was Helen Mirren, in the kitchen, with the statuette."

2. Colin Cunnington
"Hmmm... I'd say from the nature of the head wound that he had been hit with a black leather handbag by an elderly lady..."

3. Mary Faulkner
"How fortunate one remembered to keep one's gloves on."

4. John
"He does this a lot when he leaves the pub, but this is the first time he's done it on an official engagement..."

5. Chris Dodgson
"Well, pass me the scissors and I can officially declare this crime scene open."

Thanks to all who entered. What a week, you really excelled yourselves. Bravo.