Snippets harvested from the week's news, chopped, sliced and diced for your weekend convenience. 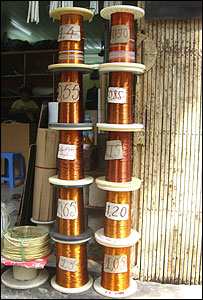 1. The Australian investment group which is buying Thames Water also owns the transmitters on which the BBC is broadcast.

2. Twice as many people turn their heads to the right to kiss as to the left, say researchers.

3. Nearly one internet user in 10 has started a blog, according to Harris Research.

4. A dwarf species of hippopotamus once lived on Cyprus.

5. There are 375 people reported missing each day, on average, according to the National Missing Persons Helpline. More details

6. More than one in eight people in the United States show signs of addiction to the internet, says a study. More details

8. One third of all the cod fished in the world is consumed in the UK. More details

10. Boys’ GCSE results have improved to the level that girls had reached seven years ago. More details

Thanks to Sarah Baker for sending the picture of 10 copper coils in Hanoi.

Seen 10 things? Send us a picture to use next week.