Getting a goal for Scotland in the recent Under-21s match against Azerbaijan was an incredible feeling.

It was the first time I'd scored for my country in a competitive match and I'm hungry for more.

We were disappointed we could only draw but we'll just have to make sure we win the last two games and reach the European Championship.

Back at Dundee, results went our way again in midweek with Ross County and Queen of the South both dropping points.

We had to fight to get a point against Inverness on Saturday after making a decent start to the game.

We created a few good chances then let them back into it and conceded two soft goals.

But once Brian Kerr pulled one back the fans got right behind us and we could have nicked it in the end.

Gary Harkins' goal took a massive deflection to earn the draw, but we'll take that kind of good fortune every week if it helps us to clinch the title. 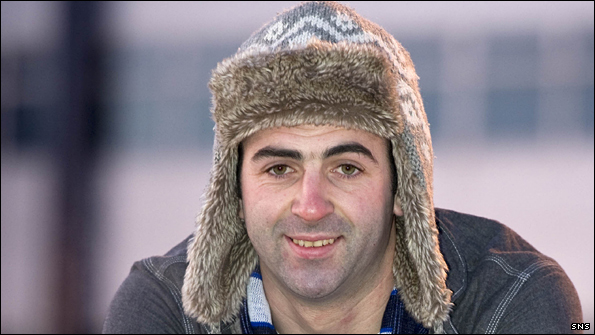 Some people in the papers were saying how lucky we were.

But Ross County got a similar result against Dunfermline a few weeks ago and it was described as the mark of champions.

Anyway, since Gaz got us an important point I'll give him a break from taking the mickey over his ridiculous hat.

He won the First Division player of the month earlier this year and turned up in what looked like an Eskimo bunnet to collect the trophy.

The boys couldn't allow that to go unnoticed and he's been getting pelters for it ever since.

He really needs to get rid of it; to be fair to him he's not the only one who needs a fashion tip or two - there are a few dodgy dressers at Dens.

David Cowan always wears polo shirts that are about 10 times too wee for him just to show off his muscles.

Then there's Eddie Malone who wears the same cardigan every day I think. John Gibson, who's on loan at Elgin, has some really wild tracksuits.

In fact, that might be why he was sent on loan...

And big Jim Lauchlin thinks he's a smart dresser, and then he turns up for training wearing an Army shirt.

No doubt the boys will give me some stick after these revelations, but it's all good banter.

There's nobody in our dressing room who doesn't get on with each other and when we get down to the nitty gritty we all pull together on the park.

That kind of team spirit is really important. And now we have a new face in the squad in the shape of Bob Malcolm.

Bob's a massive addition: he won SPL titles and cups with Rangers, and knows what's required in the run-in to championships.

If the league goes down to the last day he's got the experience to handle that kind of pressure.

You wouldn't think it if you've watched him play, but he's actually a quiet big guy.

In the changing room he hardly speaks a word. But on the park he turns into the Incredible Hulk.

He doesn't let anything past him and he's a great talker on the park as well.

So wherever the manager decides to play him, I'm sure he'll help everyone around him

As a forward it was a real pleasure to watch Wayne Rooney in action against AC Milan the other night.

He's on a different planet right now and everything he touches turns to gold right now.

He's started adding headers to his game and the composure he had to take his second goal was amazing.

You've got to admire someone like him. When I used to go and watch Hibs as a 13-year-old, Derek Riordan was the player I idolised.

Everything he did was incredible, whether it was scoring goals from 30 yards or three yards.

But, although I respect these players, I don't try to copy their style.

I just try to analyse my own performance and try to do more of the good bits and less of the bad bits.

On Saturday we have a break from the league for the quarter-finals of the Scottish Cup.

Some people might have preferred us not to have to play cup games as well as we go for SPL promotion.

But all the boys see it as a massive chance to get to play a semi-final at Hampden.

To do that we'll have to beat Raith Rovers and I'm expecting a very tough game.

Nobody backed them to win against Aberdeen. But they did, and they'll be coming here without fear.

They'll bring a good support too, but we had another fantastic crowd of 5,000 at Dens last week.

I'd ask the Dundee fans to come out to get behind the boys again.