To say it's been a mixed week at the club is putting it mildly.

There have been some good moments, which I'll come to later on.

But most of it was overshadowed by the death of a Dundee FC legend, Bobby Cox, who captained the club to the Scottish League title in 1962.

I knew he had been ill, but didn't know he had passed away until I arrived at the stadium for Saturday's game against Partick Thistle. 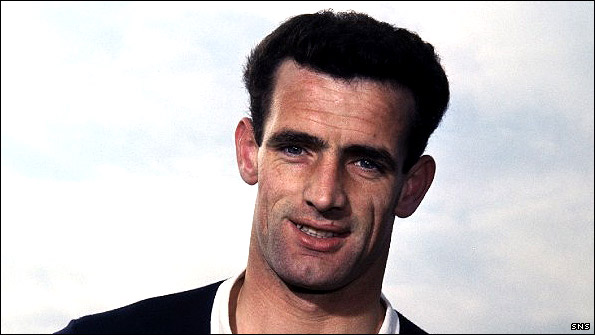 It went without saying that we would honour his memory, so we had a minute's applause in front of the home end at Dens - which is named the Bobby Cox Stand after the great man.

I knew he was a famous name for the Dark Blues, but when the stadium announcer read out his achievements and how many times he played for the club - well over 400 - it really hit home what a legend he was.

It was so impressive how many people actually turned up at the game. The Bobby Cox Stand was practically full.

And to see all those people stand and applaud out of respect for Bobby was incredible. The crowd never stopped chanting his name throughout the 90 minutes.

In the dressing room, when we found out about his death, we decided we wanted to win the game for him.

It was a fitting tribute that we managed to do that, and that the goal we scored was in front of the Bobby Cox Stand - and it was our full-back and skipper Eric Paton who scored it.

Hopefully Bobby was up there looking down, and I'm sure he would have been delighted we got the victory.

We know there's still a long way to go, but if we do eventually win the First Division title, we'll dedicate it to him.

As for the game itself, it was a scrappy affair. We dominated the first half and Partick had the better of the second period.

But big Rab Douglas never had a save to make, so that tells you how well our defence played.

We should have scored a couple more, but you'll take 1-0 victories every week if it's going to take you to the title.

Personally, I was pretty disappointed with my performance. I didn't get a shot on target. In fact, I don't think I even managed a single shot, never mind on target!

I set myself high standards and go out aiming to score in every game, and if I don't I can become a bit frustrated.

But the manager Jocky Scott spoke to me this morning and told me it wasn't all about scoring goals, and said he was pleased with my overall contribution to the team.

So if he's saying that, then I'll accept it.

But I'll try and make sure if I get a chance on Saturday against Raith Rovers, I take it.

We've taken four points out of six against them this season but they'll be on a high after beating Aberdeen in the Scottish Cup last week.

So clearly we'll need to be alert as they have proven they can beat anybody on their day.

They are strong in the wide areas, and up front where they have Kevin Smith.

I know well him well and he's played with Sunderland and Dundee United.

He's back to full fitness after a leg-break and has been flying. Hopefully, though, he has an off-day against us!

I said earlier there were some good things last week.

One of them has to do with a letter I got through the door to say I'd been selected for Billy Stark's Scotland Under-21s squad against Azerbaijan.

It's an honour to represent your country at any level and I'll just go along to the squad meeting and see if I can get in the team.

There's a lot of really good players from the SPL competing for the forward positions in the shape of David Goodwillie, Jamie Murphy, Chris Maguire and Rory Loy.

So if I can get a game I'll be delighted, but if not - all the best to whoever does play.

The other good news we got at the club was that big Jim Lauchlan and his wife Susan had a baby.

So he's been coming in every morning raving about wee baby Marcus.

Normally Lauchie's a real character who comes in for training shouting and bawling.

Maybe the baby is keeping him up at night or something, but he's been quite quiet recently...

So, welcome baby Marcus - and thanks for giving all the boys here some welcome relief from your dad!

As you can see it's been a week of real highs and lows.

On Friday the whole squad will go to Bobby Cox's funeral, before making sure we're ready for Saturday's trip to Kirkcaldy.