I'm aiming to fire Dundee into the SPL

Hi, I'm Leigh Griffiths and since the start of the season I've been playing up front for Dundee.

From now until the end of May I hope to give you an insight into life at Dens Park as we try to get back into the Scottish Premier League.

Then, after a stint at Falkirk, I was eventually picked up by Livingston, where I broke into the first team before making the move to Tayside.

In the meantime, I've also managed to win caps for Scotland at Under-21 and B levels.

Life in Dundee is good now. We're at the top of the First Division and on track to achieve our goal of getting into the top flight. 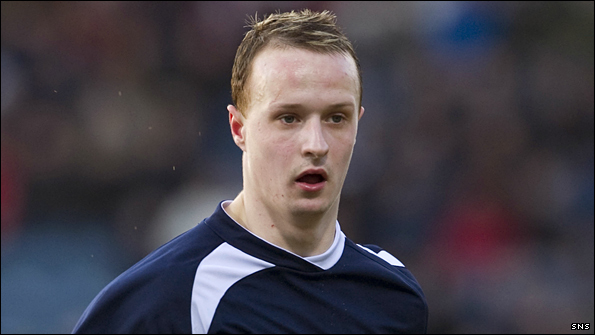 But moving here has been a new experience for me, not least because I've had to move away from my family home for the first time.

At Livi it was close enough to commute every day, and when I signed at Dens I was still coming through daily from Edinburgh with my team-mates Eddie Malone and Pat Clarke.

But after a while the travelling began to take its toll. So now I'm living up here by myself, which is good because it cuts nearly four hours' travelling out of the day.

Sometimes you can get a bit bored in a flat by yourself but you've just got to deal with it.

Most weekends I'll get home to see my family and some of my pals too, so it's not too bad.

Anyway, the main reason I came here was because Dundee is a big club and I saw we were building a squad that would challenge for the league.

We're doing well just now but obviously we've got to keep the momentum going. Other teams have got games in hand, but if we keep picking up three points then we'll get over the finishing line first.

All the boys were hoping to add another win last Saturday away to Ayr United, after we had beaten them in the Scottish Cup the week before.

We all had our fingers crossed the match would be on, and when we saw Ayr Races were cancelled we had an idea our game would be postponed too.

Everybody wants a game on a Saturday and I'm no different: it's what you train for all week.

But, all the same, when you get a rare weekend off it feels like a bit of a Brucie Bonus. So we went off and enjoyed it.

I got the chance to catch up with some of my friends back home, and for a change I could go to watch my brother playing for Musselburgh Athletic.

I also kept an eye on the other games being played in our league, and thankfully results for two of the teams challenging us for the title - Queen of the South and Ross County - went our way.

But although it's nice to get a Saturday off we're back at Dens Park to knuckle down and concentrate on our next game against Partick Thistle on Saturday.

We've done well against them so far, winning both games 2-0. I scored in the first game but missed the second through illness.

We know any game in this league is going to be hard and, especially after we beat them in Glasgow in December, Thistle will want to prove themselves up here and turn us over.

About the same time I joined from Livi, Gary Harkins arrived from Thistle, and he scored in both games against his old team.

Having a player who knows the other team so well is going to help to a certain extent.

But we've still got to be professional, prepare the right way, and make sure we don't slip up.