My father complains all the time. His back aches, the supermarket seems to be further and further away every day, computers... oh, don't get him started. He was very active when he was younger and all of a sudden his years are weighing heavily on him. "It is tough being old", he says. But some old people are tough. They are as tough as old boots. 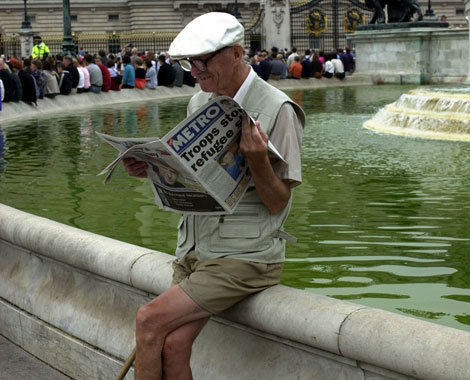 You're never be too old to enjoy an afternoon by Buckingham Palace.

Take three elderly men in the headlines recently. Sir Ranulph Fiennes, the great British explorer, has pulled out of an expedition across Antarctica because of severe frostbite. Some people were disappointed. I wasn't. He is 68 years old and had the stamina to ski in temperatures close to -30C. No matter that he had to give up now. For me he is even a greater hero than when he was younger.

Pope Benedict XVI took a lot of flak because he resigned. I praise his courage to stay in the post till the ripe old age of 85.

But the person I would give a gold medal to is Fauja Singh from India. He has finally given up his career as a marathon runner. Singh is 101 years old! That's resilience for you!

I think we should celebrate old people more. We should tell them every week how brave they are. It is tough being old, but we should be grateful for it. There is a quote attributed to French actor and singer Maurice Auguste Chevalier: "Old age isn't so bad when you consider the alternative."

Go and give a kiss to your old relatives!

don't get him started - don't encourage him to discuss the subject because he will never stop complaining about it.

his years are weighing heavily on him - he is very old and feels weak and vulnerable.

as tough as old boots - very strong and does not get injured easily.

stamina - the ability to do physical activity for a long time.

took a lot of flak - was heavily criticised.

resilience - ability to recover quickly from problems and difficulties.