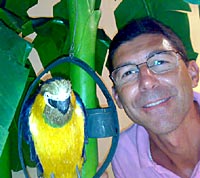 I'm Miguel from Valencia Spain, of course I'm supportes of Spain National Team " LA ROJA", this is the nickname that the supportes aloud when the Spain is playing. All the supportes wears t-shirts, scarves, and wigs of red colour. Red is passion, Red is force and Red is Spanish fury. We can, everybody with "LA ROJA".

The Spain National Team is current champion of Europe Cup, and is one of the favourite team for win the South Africa World Cup. Spain have a lot of good players, like Torres and Villa, two of the best forwards of the world, or Xavi and Iniesta, they are the brain of Spain.

When Spain is playing a match, all the streets are empty, Where are the people?. The people are in fornt TV watching the match, all the Spanish Bar are full the supportes to cheer their team "LA ROJA". In Valencia we prepare a match party in town square, and we cook a giant paella for to invite the supportes, and they can watch the match while they are eating paella.

South Africa is the fisrt African country to organize a World Cup. Every match is a big party for South Africans, the stadium are full the colours, songs and music. Do you know which is the sound of the World Cup?. It is " LA BUBUCELA", it is a big plastic trumpet that it sounds like a fly.

I hope that Spain win the World Cup, because will be the first time.