January 18th 1981 was a point of no return; an important historic moment in the life of Black Britain and arguably a defining moment for our modern diverse society.

On that day a fire at a birthday party at 439 New Cross Road, Deptford in south east London ended the lives of 13 black teenagers.

In the 30 years that have passed the controversy over how the fire started has never been laid to rest. Some have said and continue to argue that Yvonne Ruddock's 16th celebrations were cruelly ended by a fire bomb attack by racists.

Others, including members of the bereaved families, continue to believe that it was started by accident as a consequence of a dispute at the party itself.

What is clear is that the initial police investigation failed to find anyone or establish exactly how the fire started.

Despite two unsatisfactory inquests neither who nor what caused the fire has ever been established. Many people continue to believe that the Metropolitan Police failed in their duty to the 13 children and their families.

The police started the theory of the fire bomb.

On the first day of the investigation a police officer reported to Yvonne's mother, Armza Ruddock, that people had seen a man throwing a petrol bomb through a window on the ground floor of the house and then run away.

A few days before, Jill Knight a Conservative MP in Birmingham had announced her displeasure at what were deemed to be noisy black house parties.

A theme picked up enthusiastically by anti-immigrant voices at the time. In that climate the fire soon became the spark for a dramatic political intervention by black people, the like of which had never been seen before in Britain.

Incensed by slow police progress and a perceived lack of sensitivity by the authorities to the children's deaths, mass meetings were organised and a huge march planned for Monday 2 March under the umbrella of a New Cross Massacre Action Group.

It brought together activists from across the spectrum and around the country; black panthers, black parents organisations, community organisers, angry residents, and black youth groups.

Many of the names now associated with Black political participation were either involved in the organisation of the protest or eventually taking part in what was called the Black People's Day of Action.

The overall organisation of the event was delegated to John La Rose, a formidable intellectual and humanist. In the heat of the battle over race politics and the call for equality and justice for Black people La Rose advocated that the protest should not be focussed around the 'politics of resentment'. Not everyone agreed.

Thirty years ago it was an extraordinary spectacle to see up to 25,000 mostly black people marching from New Cross to Hyde Park. It took many Londoners by surprise and genuinely unnerved the establishment.

Only two years before in Southall a similar march in the heart of the Asian community for civil rights had ended in the death of campaigner Blair Peach.

Perhaps more importantly it showed that the children of migrants and migrants themselves were at a turning point.

Now they wanted to publically and collectively express their dissatisfaction with what many believed was a culture of discrimination and rights abuse by institutions of state and the police in particular. A positive step to get positive results in the quest for equal treatment.

Until then there was a sense that beyond the Black communities themselves few people acknowledged the contributions being made by these very communities to redefining what it was to be British.

Until then it was still a widespread notion, for example, that you couldn't be Black and British in Britain. I know because I was asked. 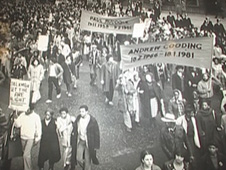 Very soon after the march, the Metropolitan Police launched operation Swamp in south London. It was a trigger for a summer of nationwide rioting that took Margaret Thatcher's government by surprise.

So when people look back and remember a summer of disturbances 30 years ago; before Brixton, before Toxteth, before Handsworth, Moss Side and St Pauls in the caustic summer of 1981 there was New Cross.

The public inquiries that followed under Lord Scarman (1981) and ultimately to the Macpherson inquiry into the death of Stephen Lawrence (1999), which looked at the relationship between young people and the Met Police, all in a sense followed on from where the Action Group had left off in its intense monitoring of the police's conduct over the New Cross fire.

But whilst it can be rightly claimed to be a defining moment in the history of modern Black Britain, for many of the victim's families the New Cross fire at 439 New Cross Road has left unfinished business.