The death in custody of a mental health patient

"I would like to extend our condolences to Mr. Rahel's family and assure them that we will do all we can to help them answer any remaining questions they might have in relation to his untimely and tragic death five years ago.

We are continuing to work with the Trust, which was responsible for the service at the time, to ensure that we, with their help, are able to address any unanswered issues to ensure that all possible lessons are learned and shared for the benefit of future patients and their families.

Yesterday's inquest verdict will obviously be of enormous help in informing our next steps and we will keep Mr Rahel's family closely informed of our progress."

Kirpal Rahel was a very bright man. He graduated from Kings College Cambridge University in 1984 with a degree in history and launched himself on a career as a teacher.

Marriage and starting a family started not long after. Unfortunately, so did the emergence of psychiatric illness.

By 1985 he was diagnosed with bipolar affective disorder and manic depression. 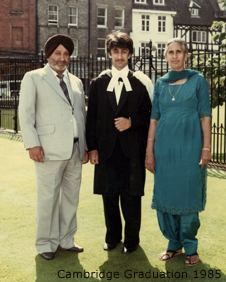 Throughout the next 20 years both Kirpal and his immediate close family increasingly struggled to manage his illness and contain the consequences of his increasingly unpredictable behaviour.

It is a set of circumstances which will be recognized by tens of thousands of families where relatives experience the emotional rollercoaster of mental health disturbances to normal family life.

One of the most enduring and difficult issues we face in the community is how to balance the needs of those with serious psychiatric issues and the safety of both themselves, family members and more broadly the public.

We no longer lock people up for good. We recognise that decisions around mental health care are consequently fraught with risk.

Families are often very reluctant to support having loved ones taken into mental health hospitals fearing the stigmatization that arises out of the contact with mental health professionals. And although the evidence is overwhelmingly positive, there are many examples where standards of care fall well below acceptable levels.

One of the most vexed issues is dealing with deaths of relatives who have been detained under section 3 of the Mental Health Act.

Being "sectioned" is one of the few ways the state can deprive an individual of their liberty. More often than not no crime will have been committed and therefore the state is effectively assuming full responsibility for the welfare of an innocent and vulnerable patient.

It's hardly surprising that some of these individuals are sometimes the most disturbed and difficult people to deal with. That does not absolve the agents of the state from needing to exercise consummate professionalism and due diligence in dealing with these vulnerable individuals.

Kirpal and his family's long battle to manage his illness and contain his progressive deterioration came to a head in July 2005.

His family had often struggled to get him to engage with mental health professionals and to follow their advice.

On several occasions from the mid-1990s his unpredictable and even aggressive behaviour overwhelmed his close family and he had to be detained at a mental health facility for his own welfare and that of others.

20th July 2005 was no different. Only on this occasion within three days he was dead.

A coroner's inquest has concluded that the quality of the decision-making managing his treatment at The Riverside Centre in Hillingdon was questionable. The fatal consequence of seemingly poor communication was the administration of a potent anti-psychotic drug which caused serious heart-failure.

At the heart of the two days evidence into the cause of Kirpal's death the court heard that a management plan of treatment had been discussed by staff prior to Kirpal's detention.

This included the injection of the potent anti-psychotic drug Accuphase (zuclopenthixol), but only in the event that Kirpal became unmanageable. Given his history the coroner accepted this was a reasonable expectation. 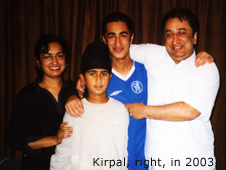 The morning after he was admitted the drug that led to his death was injected. However, in court it was unclear exactly if Kirpal had met the unmanageable criteria of the management plan and whether attempts had been made to ascertain that prior to giving the intra-muscular injection.

The consequence of that decision makes the explanation for what happened extremely important. Kirpal had been sectioned to The Riverside Centre for his own safety, but he had an adverse reaction to the drug and died. He was 42, and as the post-mortem found, an otherwise healthy man.

There was some concern expressed by the coroner that the care he received after the injection may have been marred by inadequate record keeping and documentation by the hospital.

The Central and North West London Trust that took over the running of that hospital some time after Kirpal's death, say those procedures and documentation have already been reviewed with a view to avoiding a similar tragedy.

But Kirpal's family is perhaps entitled to feel let down by the state.

It is difficult in the best of circumstances to get closure on such an unexpected death.They've had to wait a full five years for a satisfactory explanation into Kirpal's.

I understand the "Untoward Incident Report" conducted by Hillingdon PCT, its own internal investigation, failed to identify most of the significant findings heard in evidence at the inquest.

It cannot bear the hallmarks of timely or equitable justice when the State takes five full years to deliver a satisfactory explanation to a family, when a vulnerable relative has been deprived of their liberty and they then die in unexpected circumstances whilst in NHS care.

And to top it all nobody accepts responsibility for the errors that led to the death.