The devil in Southwark's details

So Southwark Council have embraced the spirit of openness. After the enforcement notice for high rise block Peronnet House was made available by a Leaseholder to the press last week, the Council decided it wanted to share this information with tenants.

Their lead Councillor on housing, Kim Humphreys put it this way, "we think it is important that all residents are able to understand what we are doing to improve fire safety in the borough."

Two months ago I queried why a report in 2000 had said Perronet House was a medium risk and whether there had been remedial works. I was told back in August that there were no significant problems with fire safety at Perronet House. The ground has clearly shifted beneath Southwark's fire safety feet. 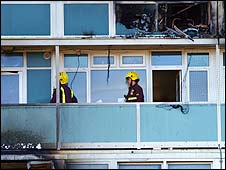 The detail is interesting. Firstly the Fire Risk Assessment that was conducted on14th August (after the fire at Lakanal House) was obviously not in place when the enforcement notice was served on the Chief Executive at Southwark, on the 11th August.

In fact, "no evidence of fire risk assessment was demonstrated during the audit process" according to the London Fire Brigade. It would seem instead the Council did a rush job and then got independent experts in. This led to a revised risk assessment which was then submitted to the LFB on 21st September.

I can only presume the information I was given at the beginning of August fell far short of what their independent experts advised them. Hopefully these experts will be kept on to check all the other hurried FRAs carried out after the Lakanal fire.

The Chief Executive has now been named as the "responsible person" for ensuring compliance with the fire safety regulations. Presumably this responsible person will in the fullness of time, explain why nearly 200 Fire Risk Assessments on blocks over six storeys were not carried out in accordance with the law prior to the fire at Lakanal which killed six people.

The suspended ceilings in the communal areas are to be taken down and replaced because the existing ones were not fire resisting. The new ceiling will have fire breaks in the ceiling voids where no existed before. A programme of sealing any flaws and breaks in the compartment walls and flaws caused by pipes or cables have started. The overhaul of all the glazed wooden doors to the staircase enclosures are to be overhauled so that they all self-close.

Finally the LFB noted that there was an inconsistent or inadequate level of means of warning in case of fire to the occupants of the flats. Southwark say they are going beyond the requirements of the order by installing hard wired smoke alarms and heat detectors to tenants' homes. Leaseholders will get the same service if they cough up.

Although it's not clear how tenants or the fire brigade will be given early warning if a leaseholder flat has no smoke alarm!

That is an awful lot of work that was missed at the beginning of August and suggests that there is a cultural misunderstanding of what it takes to preserve fire safety in these high rise blocks.

One can only hope that the remainder of the 200 blocks with post-Lakanal FRAs have not been so poorly served with identifying the real risks. One can only presume that the initial advice that Perronet House was NOT at risk was NOT given by a "competent person" as required by the fire regulations.

Strangely enough after we pointed out they had missed out 86 blocks from their inventory of FRAs sent to us a month ago, they have impressed upon one of their Tenant Management Organisations the importance of getting the work done.

So despite telling us that all Fire Risk Assessments were complete a few weeks ago it turns out 21 are due this week for Devon Mansions. At least Southwark now seems to appreciate that as the Landlord it's their responsibility to make sure FRAs are done. Fire safety has been placed firmly on the agenda.

Southwark still has a mountain to climb, but hopefully it can now lead the way for all those other London authorities that have also served their high rise tenants poorly.