Who's judging the Judge?

It has become pretty clear that Southwark Council wants as few people to talk about the Lakanal House disaster in public as possible; more on that later.

By the beginning of August it had also become clear that no-one, not the fire authorities, not local authorities, not central government, had a clear idea of how widespread the problem with high rise dwellings might be across London.

At BBC London we sent out a series of Freedom of Information requests to each one of the 32 London Boroughs. After two months we finally have enough results to piece together an approximate picture of fire safety assessments in blocks over six storeys across the capital. 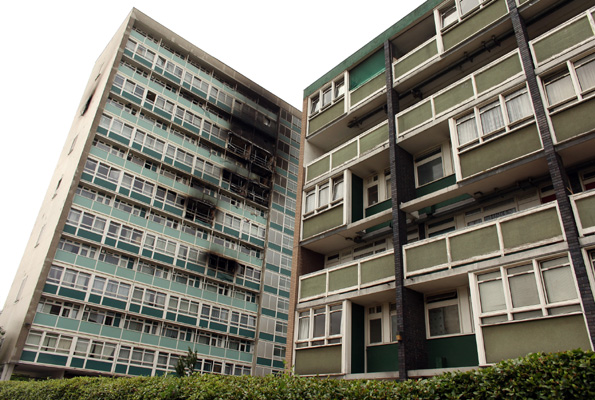 We asked each council how many blocks over six storeys each authority had? When each was last refurbished? For each block the dates of the last fire risk assessment? And which official within each local authority has responsibility for ensuring compliance with the fire safety regime in place since 2006?

Believe it or not four councils have refused to give us what should be public information. They cite the difficulty of retrieving the information and the cost it would entail.

Strange then how 28 councils have endeavoured to get us a full inventory of information. I'll name those authorities who appear to find it such a challenge to find information in a moment.

There are a few structural things that emerge from our developing database.

First not all authorities have responsibility for their social housing. Some have hived off their housing stock to housing associations. Others have given day to day responsibilities to Arms Length Management Organisations (ALMO). It's not yet clear if this has a bearing on the efficiency with which fire risk assessments are carried out.

Nevertheless, a number of authorities have a quite appalling record of complying with the Fire Regulatory Reform Order (2005).

Lambeth tell us that they have fire risk assessments on less than 5% of their current 112 blocks over six storeys.

Furthermore they are currently undertaking major refurbishments on one estate for which they appear to have no record of fire risk assessments.

The law is clear; a major refurbishment requires an ongoing fire risk assessment. We took a reputable surveyor to one block and he inspected some of the work being done.

His assessment was that the work to make the building and flats look nicer is actually increasing the risk of fire spreading throughout the block.

If his assessment is correct, how can this not be a scandal? There is supposed to be a robust fire safety regime in place.

One of the residents of the block, who is also a leaseholder representative, says he has been trying to get hold of a fire risk assessment on his block since a fire in a neighbouring block last November.

He's never seen one so we can only presume it doesn't exist.

Stacking up the number of other blocks across the capital we know about without an up to date fire risk assessment, we estimate a figure of 253 blocks.

Some of these blocks have been recently been refurbished under the government's ambitious Decent Homes Programme. One of the problems with this vision is it seems to lack specific guidance on fire safety regulations.

Despite this the law remains unchanged; fire risk assessments are still necessary.

Islington, like many other boroughs, has invested money in improving people's homes but without a fire risk assessment on over a dozen refurbished blocks it is impossible for anyone to say whether these improvements have improved fire safety. It could be, that like at Lakanal House, some 'improvements' actually make buildings less safe.

The big question is why have they not been done? The London Fire Brigade (LFB) will have to answer this one. So will the Tenants Regulatory Authority which regulates ALMOs and Housing Associations.

Although it is the responsibility of the social landlord to ensure risk assessments are done in the social housing sector it would appear that very little is being done to ensure they comply with the law. No-one is judging the judges so to speak.

They are being left to their own devices and pulling up short. Don't forget we are making this assessment from council's own figures.

Lambeth have accepted three years on from the new regime that they have not done the job but that now spurred on by the Lakanal fire they stress they have more social housing than most other London Boroughs and "by December all blocks over 10 storeys will hold a valid fire safety risk assessment, with the remaining high rise blocks being completed by March 2010."

This is a bit like arguing that as long as you're not found out breaking the law it's all right as long as once you've been found out you do your best to change your behaviour. I'll try that line of argument next time I get a speeding ticket and see how far it gets me.

Our research is not quite complete.

Hopefully it will be done within a week. We'll then put it up online so that high-rise Londoners get the clearest picture yet of how much work needs to be done to get fire risk assessments compliant with the regime which is supposed to make high rise dwellers safer in their own homes.

Three authorities, Bexley, Camden and Havering failed to give us information. All three have repeatedly been asked.

Although they have had over six weeks like all the other authorities to respond our persistence may mean they will deliver in due course.

One authority, Southwark, says it would be prejudicial to the ongoing police investigation at Lakanal House to respond.

It's not clear to me why Southwark couldn't give us the information for every other block and just leave Lakanal House out of it.

We already know they failed to provide adequate risk assessments in three other blocks; the LFB have issued three enforcement notices. Southwark have until 31st December to comply with them.

The lessons from Lakanal clearly can't wait until police investigations are completed, nor until inquests into the six deaths are held.

Our investigations have shown that there are serious systemic shortcomings in complying with fire regulations by numerous local authorities.

Yet a third of London's boroughs have an up-to-date fire assessment record. Clearly it is possible to get the work done.

Two authorities have raced to become compliant since the Lakanal tragedy.

Southwark is, however, not alone in failing to keep up to date. The important point is until these risk assessments are carried out it is simply not possible to know whether tens of thousands of Londoners are living in a safe environment.

Furthermore most authorities have been unable to name an individual officer who is the "responsible person" within the authority, as the regulations recommend, for ensuring compliance with these basic fire safety regulations.

Someone, perhaps the housing minister, needs to make sure social landlords begin to take their responsibilities seriously.

Surely the law becomes an ass if it is consistently ignored?