If you see a particularly colourful newspaper lying on the desks of the 'great' and the 'good' over the next few months it could well be the AHRC/BBC Knowledge Exchange Programme's new publication, 8 (#8essays). 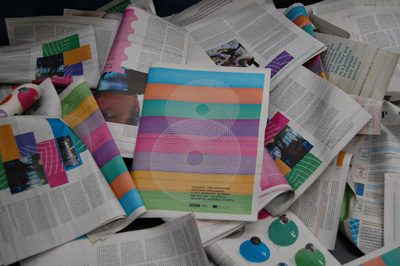 8 is a way of sharing all the lessons learned from our collaboration with the AHRC and making sure that the research findings produced by the funded projects are made the best use of. It contains articles from the likes of Bill Thompson, Kathryn Corrick and Pat Kane on, amongst other things, media literacy, the ethics of play and digital inclusion. There are contact details for all researchers involved in the studies and an official view of KEP's aims from the lead AHRC and BBC partners. There's also a graphical representation of one of the projects - a collaboration between the production team working on CBBC's virtual word for children, Adventure Rock, and the University of Westminster - which shows the connections and influence a collaborative project builds over time.

The KEP is a pilot programme. It has shown that deep level academic analyses of BBC services are of incredible value to both the BBC and its audiences. It provides a key to unlocking the full business potential of digital media and has the potential to reshape how we deliver future content, in ways we can all be a part of. We hope that the KEP will act as a springboard for BBC Research & Development in its work to remain at the cutting edge of the collaboration and innovation agendas. This very much relies on our stakeholders being made aware of the programme and its successes. Our hope is that 8 will encourage them to sit up and take notice.

You can download a PDF copy of 8 here. If you'd like a copy of the actual newspaper please contact christianna.salako@bbc.co.uk from BBC R&D's Innovation Culture. The research studies themselves are all available in the box on the right. 8 was produced in association with the Newspaper Club.

Into Uncharted Waters; heading up Knowledge Transfer at the AHRC

Susan Amor is the Head of Knowledge Transfer at the AHRC. Here she gives her thoughts on the KEP partnership from her current position, while drawing on her experience as Knowledge Transfer Programme Manager responsible for the development of the scheme until I took over.

The Arts and Humanities Research Council (AHRC) and BBC Future Media and Technology (FM&T) have been working together since 2005 to develop a long-term collaborative strategic research partnership underpinned by AHRC's strategy to enable collaborative research and development in the arts and humanities. BBC FM&T were actively seeking to exchange knowledge and develop new research and development collaborations with academic partners in the arts and humanities to consolidate and extend the BBC's public value in the digital age. The AHRC is working to address barriers to innovation in the Creative Industries and this joint initiative with BBC Future Media and Technology is providing a valuable platform for scoping a framework for innovative collaborative funding programmes.

Since I joined the AHRC in May 2006, I have been directly involved in the scoping, development and delivery of the Knowledge Exchange Programme (KEP) leading for the AHRC and working in partnership with Rowena and Brendan at the BBC. I believe that the success of the AHRC/BBC collaboration and the KEP has been due to the inclusive shaping and dedicated relationship building by both organisations from the early, exploratory stages through to present day and this is essentially down the people involved although we didn't always get everything right first time!

Jo Pollock took over the AHRC lead for the collaboration in November 2008 and has quickly established and continued a close rapport with BBC colleagues through the Knowledge Infusion Programme and the end of programme showcase event 'AHRC/BBC Knowledge Exchange Programme: a collaborative journey' held on 27 April 2009. This was an extremely successful day in many ways. One of the highlights was the panel debate 'Collaboration in the 21st century' which produced some very interesting insights and view points from panellists and event delegates. The event also provided me with the opportunity to meet up again with Rowena and Brenda and the KEP project award holders which has always been a pleasure.

The next stage is to evaluate the collaboration and the KEP and to identify the best means for taking our partnership forward strategically and in a sustainable way. I look forward to the outcomes of the evaluation and to continuing the close working relationship we have forged with the BBC.

Congratulations to all involved in the collaboration at the BBC and AHRC and to the KEP project award holders for producing such excellent and exciting outcomes from their joint research.

Listening to what children want

Lizzie Jackson was one half of a duo of academics (the other being David Gauntlett) who worked with BBC Children's to examine the behaviour of children using CBBC's virtual world for Children, Adventure Rock. In the first of a series of posts from Lizzie and David, Lizzie outlines a few of the findings from the study. 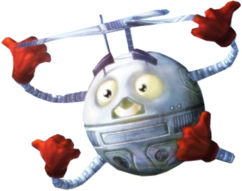 'Adventure Rock' is a 3D virtual play environment for 6-12 year olds which launched in April, 2008. Children explore an open air world to solve the mysteries of the island, meet crocodiles and robots, play games, go snowboarding, make videos, cartoons, invent contraptions and go dancing, and so on. We ran a year-long research project aimed to find out what children thought of 'Adventure Rock' and other virtual worlds for children such as Club Penguin and Moshi Monsters. The main researchers were Lizzie Jackson (myself) and David Gauntlett, from the University of Westminster, working primarily with Rachel Bardill and Pete Davies at BBC Children's.

90 children aged 7-11 from Cardiff, Belfast, Glasgow and London took part. The children told us what they liked and didn't like in two sets of creative workshops and in diaries. Their parents also gave us their views via a questionnaire and we spent time with the producers of 'Adventure Rock'.

The children told us they wanted to be sociable, creative, to have control of the space and to be able to change it, to have a visible status, to know where they were, to have a clear mission. They also liked the fact that 'Adventure Rock' was 'outdoors' and that there was some humour. Children felt virtual worlds should provide help when you need it, and they wanted to see professional video from CBBC, plus their own work and other children's work in the worlds. They wanted somewhere to live (a home, hotel or town), and to have shops and a place away from adult rules!

After they had seen the findings BBC Children's producers decided to place more video within the world and the activities children could do together were increased by extending the accompanying website. The research showed 'Adventure Rock' didn't offer all the things the children wanted, however both the children and the parents felt the BBC should be providing content like 'Adventure Rock'. To read both an overview report for general readers and a fuller report with more information on 'Adventure Rock' project go to artlab.org.uk

The Knowledge Exchange Blog is the official blog for the AHRC/BBC Knowledge Exchange Programme. It is the place to keep up to date with the progress of the KEP itself and all the projects funded through the initiative. It also provides a space to discuss future opportunities for collaborative research and knowledge exchange between the BBC And Academia.

You can stay up to date with The Knowledge Exchange Blog via these feeds.